"We're closed!": Donald Trump, Barack Obama, immigration panic and the toxic allure of the past

One president thinks history can be stopped; the other thought he was shaping the future. They were both wrong 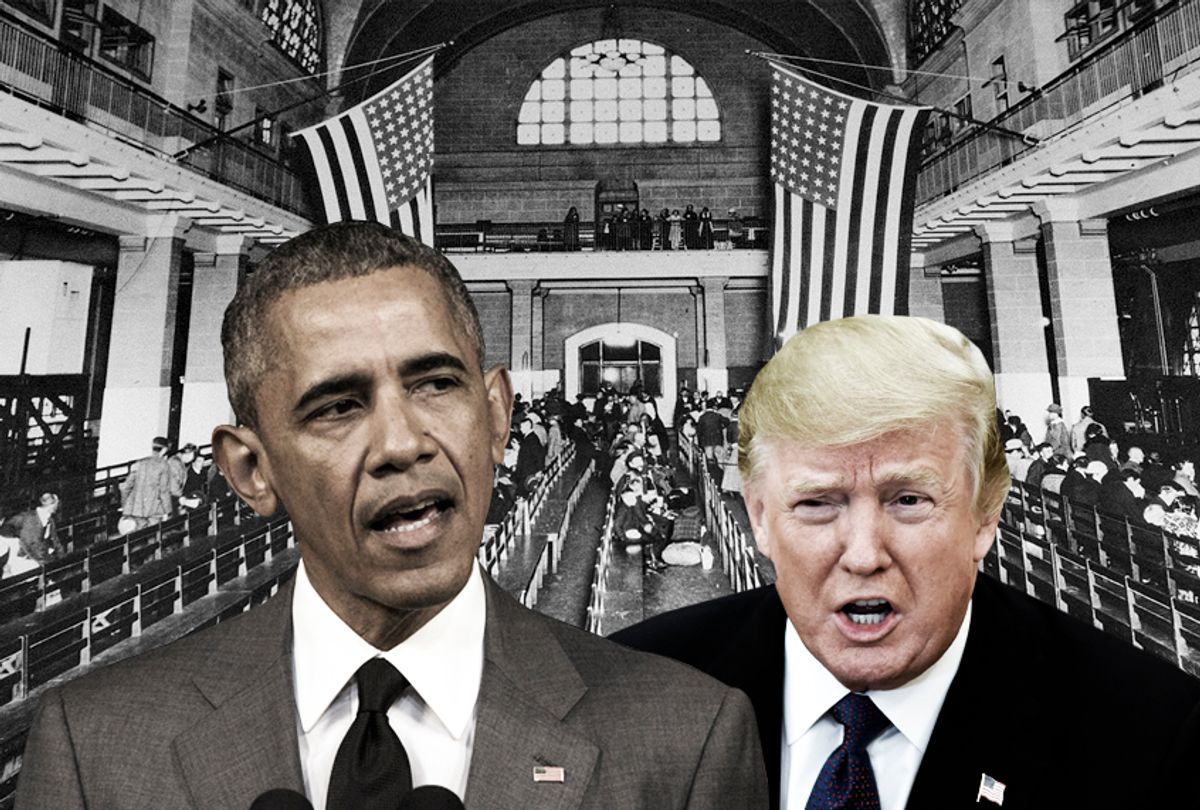 Two anecdotes recounted this week define where we are in America, I think. At a contentious Cabinet meeting in early May, President Trump reportedly barked “We’re closed!” at Homeland Security Secretary Kirstjen Nielsen, by way of berating her for allowing too many undocumented immigrants to sneak across the Mexican border. Nielsen, already a villain to liberals for enforcing the administration’s pointlessly cruel family separation policy, is now the latest member of Trump’s Cabinet to be perceived as an Enemy Within. (At some point, the “deep state” conspiracy will consist entirely of people Trump personally appointed. There’s a circular, paranoid brilliance to that worthy of a Thomas Pynchon novel.)

Ben Rhodes, a close confidant of Barack Obama who served as a deputy national security adviser throughout Obama’s two terms in the White House, publishes a memoir this week that draws back the curtain at least a little on the former president’s reaction to his successor. According to a pre-release teaser article in the New York Times, Rhodes’ book, “The World as It Is,” describes Obama as deeply shaken by Trump’s 2016 victory, and left “wondering whether he had misjudged his own influence on American history.” Obama reportedly told Rhodes and others, “Sometimes I wonder whether I was 10 or 20 years too early.”

That’s right where we are: too late to recapture the past, too early to reach the future. We’re not “closed,” no matter what Trump says and no matter how strongly that fantasy plays to the immigration panic at large in TrumpLandia. No imaginary wall and no army of ICE shock troops can end immigration, “illegal” or otherwise. If you’re reading this, you probably don’t need me to tell you that immigration is crucial to the U.S. economy and is almost always a positive, dynamic force in American society, whatever dislocation or backlash it may cause in the short term. There’s no serious debate about that among economists, and as I wrote here two weeks ago, there’s also good reason to believe that the relatively high immigration levels of the 1990s and 2000s were a key factor in the renewal of American cities and the dramatic drop in violent crime.

Trump’s vicious assault on immigration is pointless, self-destructive and built on evil fantasy — and it’s almost certainly the principal reason he is president today. But it might be fair to say that Obama’s presidency was built on a fantasy too, one that was much less sinister and destructive but also disconnected from present-tense reality. Obama never literally described himself as a post-racial emissary from the cosmopolitan, globalist future — a biracial kid with an African name who barely knew his father, born in the most distant state and partly raised in Asia — but he didn’t exactly run away from that image during the 2008 campaign, and clearly understood that his strangeness was an asset.

Like so many of the myths that plague our age, the right-wing fantasies about Obama’s birthplace and religion — vigorously promoted by Donald Trump — were entirely false yet concealed a deeper truth. Obama simply didn’t fit into the misty, ill-defined notion of the American past embraced by the new Trumpian right, and in that sense was clearly an outsider, an alien. Is it fair to say he also came off as overly cool and sardonic, the globetrotting intellectual who viewed heartland Americans who clung to “guns or religion or antipathy to people who aren’t like them” with a certain condescension?

Sure, maybe. But what’s most striking about those infamous Obama remarks 10 years later is that they didn’t hurt him at all — he carried Pennsylvania, where he said that stuff, both times, along with Iowa, Michigan, Ohio and Wisconsin — but could not have described the contours of the coming Trump rebellion more perfectly. Whether Obama was an effective political leader (not very) and what more he could have done in the face of relentless Republican obstruction (not much), his aura of future-ness was both his great strength and his great weakness. He seemed to forecast a possible America in which we had overcome all kinds of stuff we actually haven’t; Donald Trump, emerging from the collective subconscious like Freddy Krueger with a Twitter account, is the most forceful possible reminder of that.

Up close with Barack Obama in his final days

Director Greg Barker on "The Final Year," his documentary focusing on Obama's foreign policy team in 2016.

We’ve spent way too much time worrying about Trump’s supporters, the supposedly “forgotten men and women of our country,” as the president described them in his inaugural address. (Before the largest crowd ever.) Were they motivated by economic stagnation and cultural isolation, by the not entirely unjustified feeling that they had been left behind and sneered at, chucked into the basket of deplorables for a ride on the conveyor belt to nowhere? Or is all that stuff just polite pseudo-anthropology, a workaround for the inescapable fact that Trump voters were a pack of benighted white racists, terrified by the “browning of America” and their own demographic decline?

I’ve never thought those explanations were mutually incompatible in the slightest. In fact, the left-liberal insistence on some clear either/or — “economic anxiety” or blind racism — often as a way of continuing the internecine Bernie vs. Hillary war of 2016 by other means, strikes me as a different form of the same Trump-era political pathology. Everybody is looking for easy answers in an era when there aren’t any.

On one hand, my Salon colleagues Amanda Marcotte and Chauncey DeVega have made convincing arguments (in different ways) that most of the Trump electorate is permanently lost to reality, self-exiled to Roseanne Barr conspiracy-theory land, and that there’s no point in trying to placate such people or reason with them. On the other hand, Joe Biden, the most mainstream, old-school Democrat in the potential 2020 field — and the one putatively most likely to win back white working-class Trump voters — is far and away the polling leader at this too-early stage. (To be clear, I’m not arguing that Biden should be the Democratic nominee, or that he will be. Those are entirely different questions.)

It will be many years before we can see this strange historical moment in all its dimensions, if we ever do. I simultaneously believe that it’s useless to waste one’s compassion on people who have followed Donald Trump all the way down his rathole of paranoia and delusion, and that there really is something tragic and pathetic about Trump voters’ collective predicament. Like so many other Americans — like our whole country, arguably, or at least the white folks — Trumpers are hopelessly addicted to an idea of the past that has almost nothing to do with actual history.

What past are we talking about? When was the era of lost American greatness, to which the Trump revolution will return us? Nobody has the slightest idea, because the whole thing is a fiction: It’s the Reagan years mixed with the Camelot years mixed with the Eisenhower ’50s mixed with the New Deal mixed with the Gilded Age — and with some of the antebellum South thrown in, for the Roy Moore-Jeff Sessions crowd. Except that all those periods either had a vastly more robust welfare state (funded by hefty tax rates on the wealthy) or a vastly more limited supply of affordable consumer goods, or both.

What saves the Trumpian vision from turning into full-on fascism, perhaps, is that it’s fundamentally lazy. Adolf Hitler mobilized an entire society in the cause of rebuilding German greatness, conquering a continent and expelling or exterminating undesirables; no one can claim they didn’t work hard at it. Trump’s followers are a disgruntled minority who effectively want “free stuff,” namely Amazon and Netflix and cheap Chinese electronics and white privilege and well-paid industrial jobs, all at once. They dimly understand that those things don’t all go together, so they’ve accepted a devil’s bargain: Make the lives of other people worse, and maybe we’ll feel better. It’s horrible but also tragic.

This desire to recapture a lost, imaginary past has been baked into the American experience from the beginning, and quite likely into human nature as well. Archaeologists joke that the earliest translated Sumerian tablets turn out to be complaints about how much better everything was under the old king, and it’s not entirely false. Perhaps the paradigmatic modern novel is called “In Search of Lost Time” (aka “Remembrance of Things Past”) and the most famous of all American novels — set, not coincidentally, in an earlier era of immigration panic — ends with a lyrical passage often taken to describe our national Zeitgeist, “boats against the current, borne back ceaselessly into the past.”

As I’ve suggested, liberals and Democrats have their own version of this syndrome, and are overly eager to believe that the historical dial can be twisted back somehow such that the Trump moment never happens or doesn’t matter, pointing us once again toward the cosmopolitan, multicultural, entrepreneurial future that the Obama presidency gestured at but could not will into existence. That’s an embarrassing fantasy too, if not nearly as awful. We’re stuck with the history we’ve got, and these two presidents — the one who wants to close the country down and the one who apparently got here by time machine — are both part of it. How do we reconcile them and write an American future? It’s a bigger question than any of us can answer.