With every pardon, Trump is giving the finger to the rule of law

Trump machine-gunned the rule of law in this country, and his supporters stand up and cheer him on 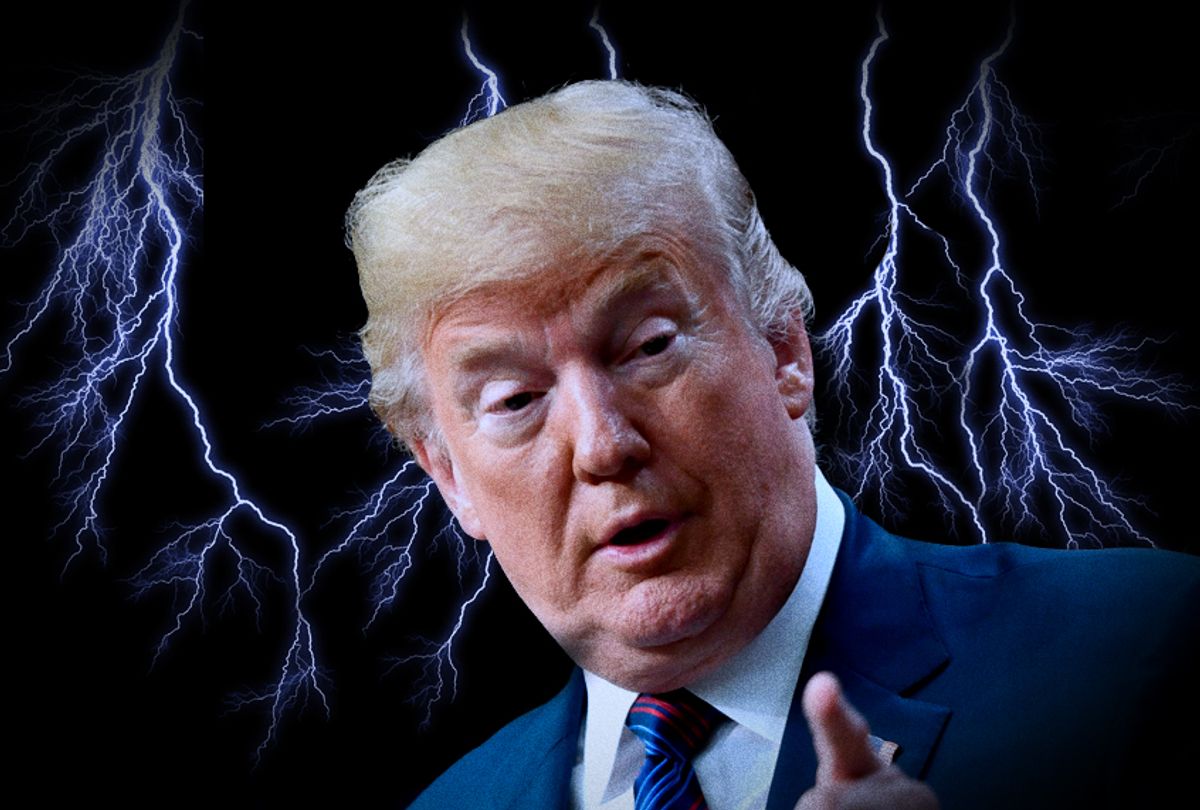 We should have paid closer attention when candidate Donald Trump told a rally in Sioux City, Iowa, on January 23, 2016, that he “could stand in the middle of Fifth Avenue and shoot somebody and I wouldn’t lose any voters, okay? It’s like incredible.”

Most recently, he’s been shooting at the pardon clause of the Constitution, issuing one this week to unrepentant felon and certified right-wing loon Dinesh D’Souza, who he said was “very unfairly treated” when he pled guilty to violating campaign laws and was sentenced to a fine and community service. He pardoned the outright racist, law-breaking Sheriff of Maricopa County, Arizona, the execrable Joe Arpaio. He pardoned Lewis “Scooter” Libby, the former aide to Vice President Dick Cheney, who lied us into the Iraq War. Libby was convicted of lying to the FBI and obstruction of justice concerning the outing of CIA agent Valerie Plame. Trump loves his fellow liars. We should have seen that coming, too.

Now he’s promising to commute the sentence of former Illinois Governor Rod Blagojevich, convicted of perjury, bribery and extortion and sentenced to 14 years in federal prison. And he’s said he plans to pardon lifestyle-maven Martha Stewart, convicted of lying to the FBI in a case about insider trading.

What do all of these pardons and commutations have in common? They were issued to criminals who were convicted by Trump’s sworn enemies. D’Souza was prosecuted by former New York U.S. Attorney Preet Bharara, a fierce Trump critic. Blagojevich was put in jail by Patrick J. Fitzgerald, U.S. attorney in Chicago and a close friend of former FBI Director James Comey. Martha Stewart was prosecuted by Trump nemesis Comey himself while he was a U.S. attorney, before he was appointed FBI director.

Trump issued his pardons without consulting the Department of Justice or following the same official procedures followed by every other president. It’s his way of giving the finger to the rule of law. He’s telling the whole world that when it comes to justice and the rule of law in the United States, he is in total control. The pardon power given to the president of the United States is a relic of monarchial English law, and Trump is using it like the monarch he considers himself to be.

The man who openly expresses his admiration for dictators like Vladimir Putin of Russia and Recep Tayyip Erdoğan of Turkey is relishing the absolute power afforded by the pardon. It’s incredible to think of, but Trump wasn’t satisfied with being elected president of the United States. He wants to be a dictator, so he’s acting like one.

Trump realized early on — perhaps as early as his prediction that he could commit murder and not lose any voters — that he could violate political norms, flaunt campaign laws, commit outright felonies and use his office to get rich, and he could do it in the open and get away with it. This is the real difference between Trump and Richard Nixon, who conspired with a small circle of aides and committed his felonies in secret, behind closed doors.

Trump understood instinctively, perhaps because of his long experience riding the waves of lesser scandals in the New York tabloids for decades, that he didn’t have to hide. He has gone from bragging at campaign rallies to treating the entire United States like “the middle of Fifth Avenue.” He’s murdering the Constitution every day and getting away with it.

The other Big Lie he and his minions pushed last week was that he was never warned by the FBI or other intelligence agencies that Russians were trying to infiltrate his campaign. Trump tweeted:

With Spies, or “Informants” as the Democrats like to call them because it sounds less sinister (but it’s not), all over my campaign, even from a very early date, why didn’t the crooked highest levels of the FBI or “Justice” contact me to tell me of the phony Russia problem?

The facts prove otherwise. Trump was given a briefing in August of 2016 by officials from the Department of Homeland Security and other intelligence agencies that foreign adversaries of the United States, including the Russian government, were likely to attempt to interfere with the election, including infiltrating his campaign. “The security briefing included information about potential interference by foreign actors, including Russia, according to sources familiar with a memo that detailed the August 2016 briefing,” according to CNN.

Less than a month earlier, just before the Democratic National Convention, WikiLeaks had published 20,000 emails hacked by Russian intelligence from the Democratic National Committee server. Trump and everyone else already knew by the time he received his intelligence briefing in August that Russian interference with the presidential campaign was fully underway. Did he pick up the phone and call the FBI and report that Russians were trying to infiltrate his campaign? No, he proceeded to mention the WikiLeaks release of private Democratic Party information more than 160 times during the rest of the campaign. But he didn’t just mention it.

He actually praised WikiLeaks. “I love WikiLeaks,” he called out at campaign rallies over and over again. What he was doing was congratulating the Russian government for helping his campaign by damaging his opponent, Hillary Clinton. Trump knew all along that it was the Russians who were behind the WikiLeaks hacked DNC emails. That’s why he kept praising Putin. Trump wasn’t afraid of him. He was in awe of him. He was thanking Putin for helping his campaign. His praise of Putin and congratulations to the Russians were right out in the open.

Over and over again, he praised Russian President Vladimir Putin. He didn’t just fail to criticize him, he expressed open admiration for him. “He’s a strong leader,” he told Chuck Todd on "Meet the Press." “He’s making mincemeat out of our president. What am I going to say? He’s not a strong leader? He is a strong leader.” Trump didn’t need to get into the details of the so-called “scandals” the hacked DNC emails revealed. The audiences at his rallies didn’t want to hear what Democratic Party Chairman Debbie Wasserman Schultz had done to undercut Bernie Sanders’ primary campaign against Hillary Clinton.

All Trump had to do was praise WikiLeaks and thank Vladimir Putin, the guy who was “making mincemeat out of our president,” to get his message across. You’re tired of the status quo in Washington? So am I. I’m going to get in there and shoot them down. I’m going to turn Washington D.C. into “the middle of Fifth Avenue.”

He’s turning the meaning of the Constitution of the United States inside out and backwards. He is subverting the power of the pardon, which is meant to be used to show mercy and to correct wrongful convictions, by rewarding friendly felons and punishing dastardly enemies. He’s killing the Constitution and the rule of law in America, and exactly like he predicted at a rally in Iowa in January of 2016, he hasn’t lost a single voter. They’re out there lapping it up.