Alex Jones has a vile Bourdain take. The world serves as a corrective 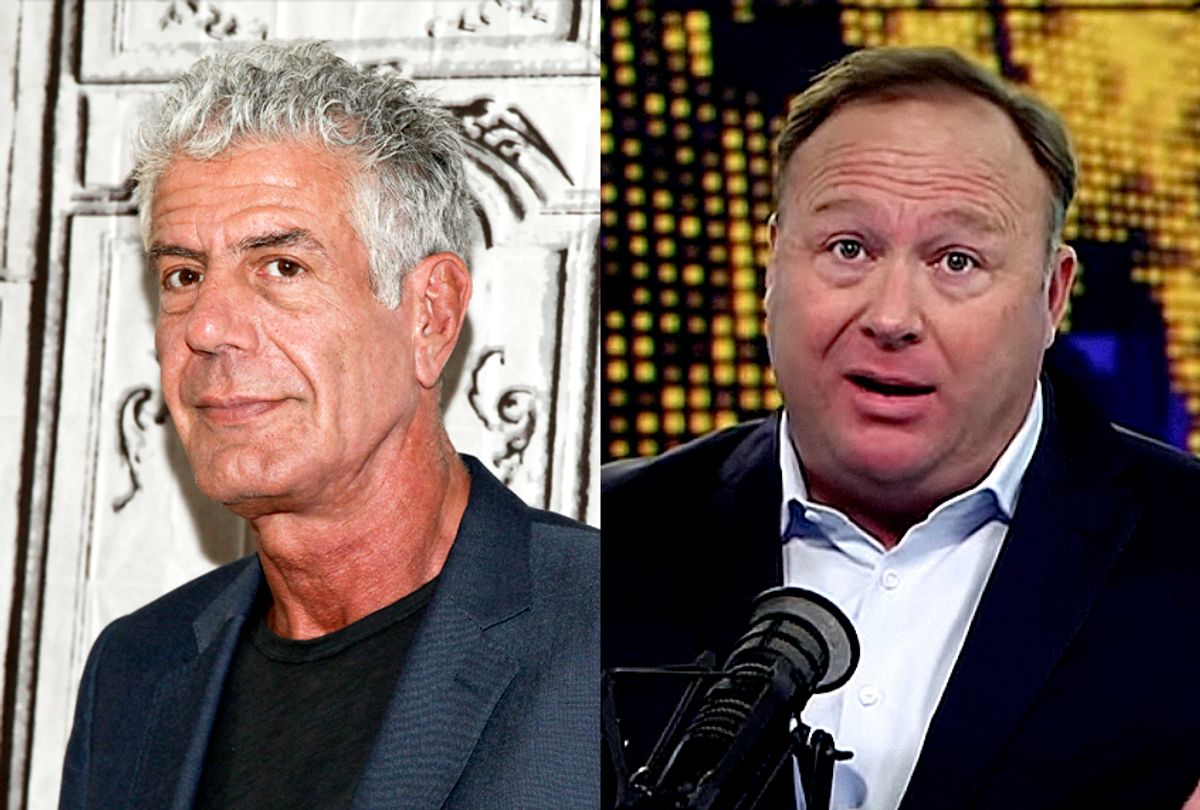 Since the news arrived Friday morning that beloved chef, author and TV host Anthony Bourdain had committed suicide, the world has been collectively mourning. Well, except for Alex Jones.

The far-right conspiracy theorist took to Twitter to offer a vile take on Bourdain's death. "Anthony Bourdain had the guts to call Henry Kissinger an evil war criminal and Hillary 'shameful' for defending Harvey Weinstein! Hope he is in a better place.. Hillary has called me 'Dark Heart' so let me just say again I will never kill myself!!," Jones tweeted Friday morning, and included a screenshot of an excerpt from Bourdain's book, "A Cook's Tour: Global Adventures in Extreme Cuisines."

Somehow, Jones found a way to not only shame Bourdain and all those who suffer from mental illness, but also to disparage Hillary Clinton and — remarkably — make Bourdain's death about Jones himself and his own political grievances.

This type of narcissism and outlandish behavior is far from new for the conspiracy-peddler and media personality. Jones infamously spent years trying to discredit the Sandy Hook massacre school shooting, in which 20 schoolchildren and six adults were shot and killed. On his radio and TV show "Infowars," Jones promoted the theory that the Las Vegas mass shooter Stephen Paddock had to be a liberal because "he drank Pepsi!"

"I mean, literally, conservatives do not drink — especially in the Obama era — conservatives drink Coca-Cola. If you drink soft drinks, liberals drink Pepsi," he added. "Now, that's a big clue!"

Jones has long been a sympathizer for white nationalist causes. Indeed, recently Jones insisted that the white supremacists and neo-Nazis who marched in Charlottesville in August 2017, inciting violence that left one woman dead, was not their fault, but rather the work of "Jewish actors." While Jones refuses to believe that actual neo-Nazis are Nazis, he has no problem depicting Parkland activists David Hogg and Emma Gonzalez as members of the Hitler youth. In a recent broadcast, Jones juxtaposed Nazi imagery with footage from the March For Our Lives mass demonstration in Washington, and replaced Hogg's speech from that day with declarations from Adolph Hitler. These are just a few examples.

But given Bourdain's progressiveness, his attention to representation in the food industry, and reverence for food origin, it makes sense why Jones responded in this way. As food historian and author Michael W. Twitty wrote of Bourdain on Twitter, "Black folks loved this man because he didn't appropriate, when it came to us all he could do was celebrate. He told the world we were the center of Southern [and] Brazilian food and he let us speak for ourselves."

Twitty added that Bourdain was a rarity in the food world and sought to move the industry away from its predominantly white gaze and often harmful stereotypes of black culture and people. "He called Africa the cradle of civilization, took his cameras to Haiti," Twitty said, "broke bread with Obama like a human being."

Bourdain "did not exploit race or religion or other human conflicts... rather he illuminated how food played a role in the deep passions behind those conflicts and challenged us to not see bad or good but human," Twitty continued.

Just as Jones seeks to erase or revert the attention away from the beauty and sincerity of Bourdain's life and work, the world has chimed in and marveled at the nuance and versatility of the empathetic chef and writer.

Bourdain was found dead in a hotel room in Paris by the French chef Eric Ripert, according to CNN. "His love of great adventure, new friends, fine food and drink and the remarkable stories of the world made him a unique storyteller. His talents never ceased to amaze us and we will miss him very much," the network said in a statement Friday.

Beyond his accomplishments as a famous chef, author and TV host, Bourdain spoke openly about his past addiction to heroin. Likewise, in the era of #MeToo, Bourdain was unequivocal in speaking out about harassment in the restaurant industry.