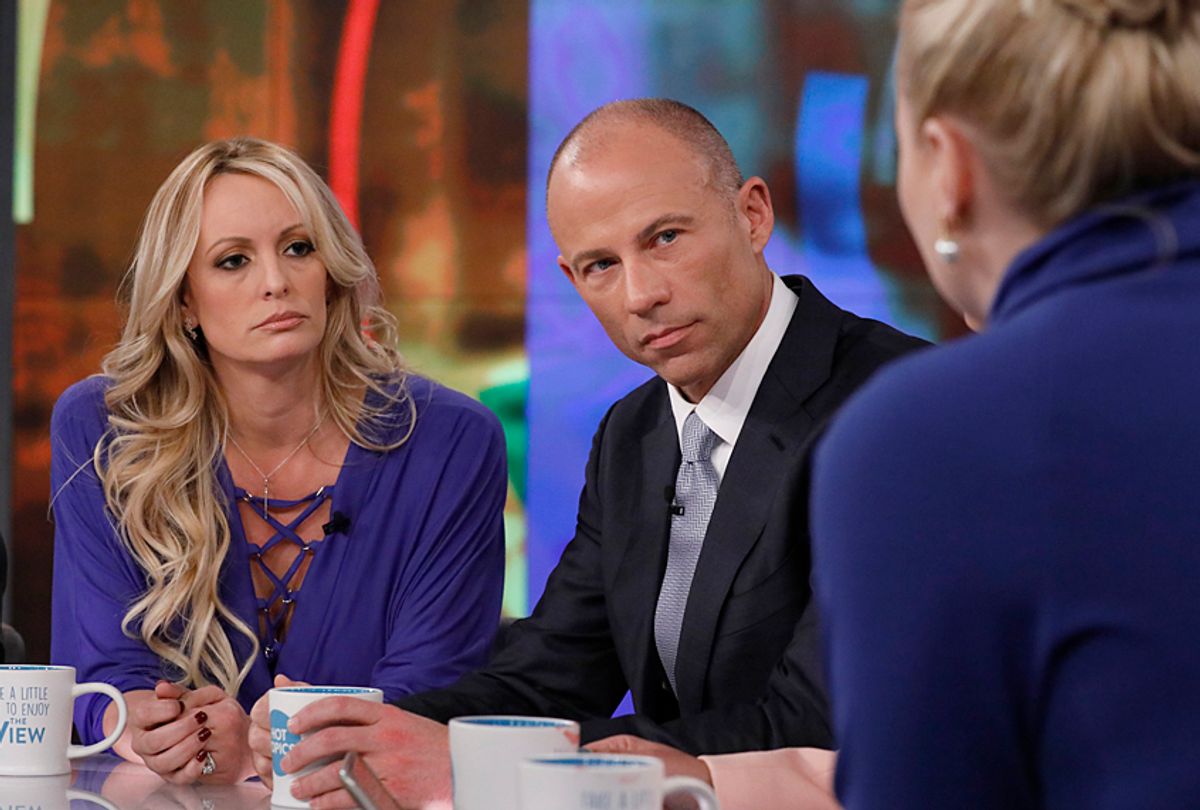 Michael Avenatti, the silver-tongued attorney who has suddenly become the center of the Stormy Daniels saga, has been very public and vocal about defending his client's interests  — particularly in the face of recent sexist attacks.

He was quick to call former New York City Mayor Rudy Giuliani a "pig" after the president's new personal lawyer dismissed her claims by arguing that Daniels "has no reputation. If you're going to sell your body for money, you just don't have a reputation."

The adult film star claims Donald Trump's lawyer, Michael Cohen, paid her $130,000 in October 2016, one month before Trump was elected president, for her silence about an affair with "The Apprentice" star at a Lake Tahoe event a decade before.

Salon spoke with Avenatti about the sexism directed against his client, as well as other matters.

How is Stormy Daniels doing, by the way, during all of this? I mean, I can imagine it's been stressful. Is she handling it with aplomb? Like, how is she viewing her role in the current political maelstrom?

She's handling it incredibly well. She's very strong. She has incredible fortitude and perseverance and I've been nothing but impressed with the way that she's handled it. There's been a number of security concerns that continue to arise, but regardless of them, she's shown absolutely no weakness and she is 100 percent committed to seeing this through to the end.

When you say there've been a number of security concerns, including those that continue to arise, have any of them come from Trump or his political allies?

When you say political allies, that's a very broad term, but I don't think that the people that are making death threats against me, my clients and our families are certainly, supporters of the Democratic Party. I think they are certainly supporters of the President, Republican Party and the far right. In any event, there's nothing to indicate that any of them are, have direct ties to the President.

Now I want to get to the thing that I find very interesting about this, which is the historical significance of this case. What kind of role  . . . would you ultimately hope to see it play in terms of Donald Trump's presidency and holding him accountable, particularly for what he has done to your client?

No, I would hope that history would look favorably upon my client and this cause. I hope that history looks upon her as someone that had incredible courage and strength and stood up for doing the right thing at the right time. She was one of the few individuals that have the courage and fortitude to go up against this President, who has bullied many, many people and intimidated them and threatened them.

What about your own role? I mean, you're not just her lawyer, you're someone who is taking on the most powerful man in the world. I have to imagine that you've had time to sort of sit back and think 20, 30, 40 years from now, how will people remember what I'm doing? How does that feel? What kind of thoughts do you have?

A lot of people may not believe this answer, but it's 100 percent the truth. I'm being nothing but honest when I say this, I really haven't had that moment to sit back and think about how is history going to judge me when all of this is said and done. I'm trying to take this one day at a time, one hour at a time right now, frankly. There's a lot of moving pieces to this. It’s a very dynamic fast-moving situation, incredibly fast-moving. High pressure, high stakes, I don't have any time to really sit back and think about how history may write this. What my role may ultimately be when the history of this is written. I'll say this, whatever is written, I hope it's positive and I hope that it reflects that I did a great job for my client.

I would like to go to something you said [recently], which even though it was a response to something in the immediate news cycle, I do think has some broader and deeper significance. When Rudy Giuliani said, and I'm going to quote him, “If you're going to sell your body for money, you just don't have a reputation,” you referred to him as an “absolute pig.” Now obviously, part of the reason you said that is because he attacked your client and you were right for doing it for that reason. I mean, there is an undercurrent of misogyny there. I was wondering if you'd be interested in unpacking some of why you found that statement to be so offensive.

Why do we even talk about it as an undercurrent of the misogyny? I think it's front-and-center misogyny. I think that Mr. Trump and Mr. Giuliani share those views, and I think they're disgusting. I think that, ultimately, women in America are going to make them pay the price. Whether it’s in 2018 or 2020, at least, I’d certainly hope so. I think there should be a very stiff price to be paid.

Now do you think people, in general, have been looking at this case differently because of what Daniels does for a living? If she was just a model or an actress or a waitress or some other vocation, do you think people would be more sympathetic and more understanding than they are now?

I think the people that were not going to support her, were not going to support her regardless of her profession. I will say that I have been pleasantly surprised and encouraged by the amount of support that she has received from women across this country. I have been very pleased with the fact that many, many women look beyond what she does for a living. When it comes to judging her credibility, that has been refreshing, encouraging and I hope it continues.

There's no question that he knows my client is telling the truth because he was there and this happened. I think 80 percent of Americans have viewed her "60 Minutes" interview and came away believing my client. I know people on the right that are staunch supporters of the president, and even they comment to me on how much credibility she had. How much they believed her as to what she said. In my view, there's zero question. She was telling the truth during that interview.

Mr. Trump knows it, I think the First Lady knows it. I think Mr. Giuliani knows it; they know exactly what happened here. I think Mr. Trump also knows that he participated in the cover-up relating to this $130,000 payment. He picked the wrong fixer to handle it. He picked the guy in Michael Cohen, who is not that tough and is a moron.

Michael Cohen, I'm sorry, I shouldn't have laughed at that, but it was a . . . I take it you would not consider Michael Cohen to be your professional equal?

Hardly, nor [would] I consider him to be the Socrates of our time.

Not even Aristotle? You won't go Aristotle for him?

I won't go to Socrates, Aristotle or Plato.

Okay, he's lost all of the major Greek philosophers. I would actually like to go back to something else involving gender.

A lot of people have been talking about Melania and how she must feel since this affair occurred during his third and current marriage. She has actually had a much lower public profile since the story broke. Do you feel like she is somebody that people should be viewing sympathetically at this time, given that she was cheated on and humiliated?

Absolutely, I have a lot of sympathy for the first lady. I think that other people should have sympathy for her. From all indications, she's a nice woman. I don't think she signed up for any of this.

The upside of impeachment

An acclaimed professor talks with Salon about the possibilities involving impeaching Donald Trump.