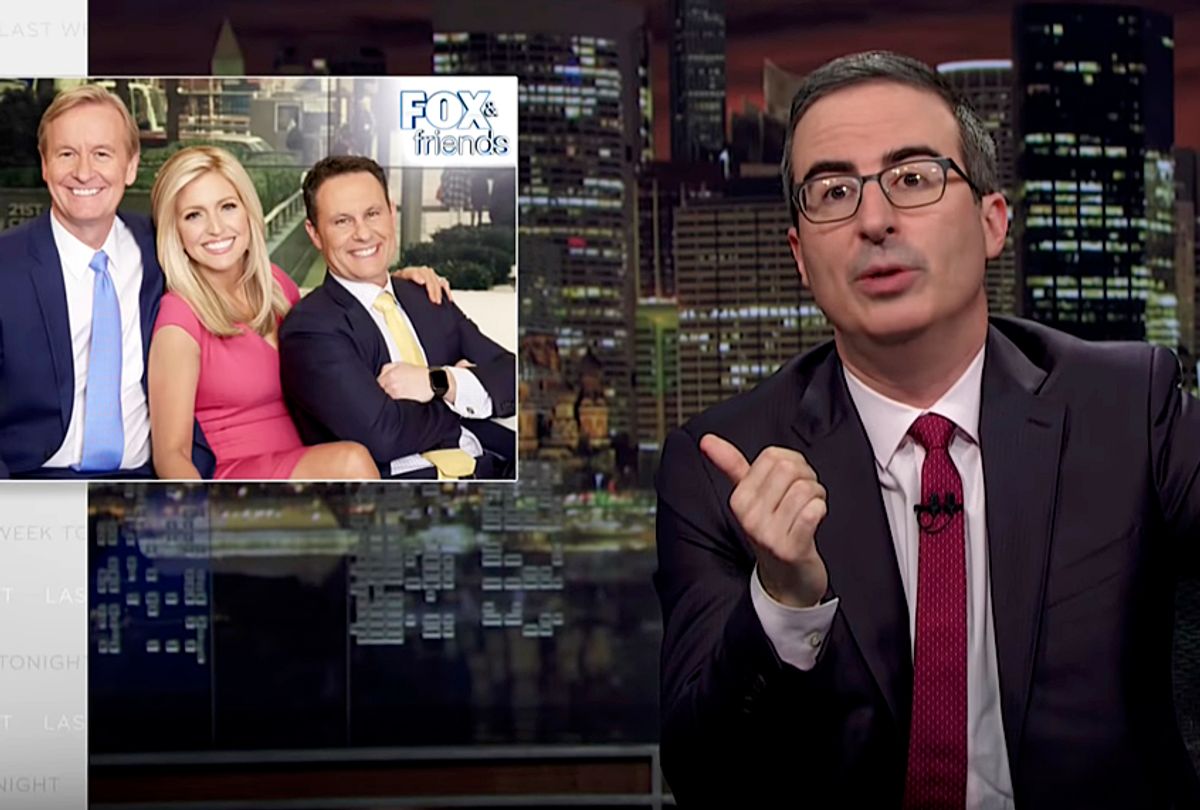 President Donald Trump and his political allies on Fox News have been trying to thwart Robert Mueller's investigation into potential collusion between Trump's campaign and Russia — and comedian John Oliver perfectly deconstructed how they're doing it.

"If this is a witch hunt, witches exist!" Oliver exclaimed to set-off a dedicated segment of his HBO show "Last Week Tonight" on Sunday.

After reviewing a series of clips in which conservative pundits on Fox News described the Mueller probe as a "witch hunt" into the president, even though it has already produced nearly two dozen indictments and five guilty pleas, Oliver noted — by pulling up a pair of Monmouth University polls — support for the Mueller investigation has dropped over the past year from 62 percent in 2017 to 54 percent in May.

This is not a coincidence, Oliver argued, but rather proof that the main goal of the Trump administration's and Fox News team's strategy has been to discredit the investigation in the eyes of the public so that Congress, which alone has the power to hold Trump legally accountable, will decide not to do so.

After ticking off a list of Fox News personalities who have been particularly aggressive in pursuing this strategy — including Lou Dobbs, Tucker Carlson, Jeanine Pirro, Janice Dean, The Five, Fox & Friends, Sean Hannity — Oliver then included a quote by Trump's lawyer and former New York City Mayor Rudy Giuliani, one that he pointed out aptly summed up the underlying rationale behind their PR campaign.

"Eventually the decision is gonna be 'impeach, not impeach,'" Giuliani declared in one Fox News program. "Members of Congress, Democrat and Republican, are gonna be informed a lot by their constituents. So our jury, as it should be, is the American people."

The centerpiece of Oliver's segment then arrived: Exploring the three tactics used by Trump's team and media allies to encourage the American people to not trust the investigation and, if possible, to support having it shut down altogether.

The first one was labeled by Oliver as "redefine" and involved claiming that the investigation had failed because it hadn't proved "collusion" even though Mueller's mandate was much, much broader. The second one was "whataboutism" in which Sean Hannity and other Fox News hosts identified scandals unrelated to the Mueller probe, or which do not have a material impact on whether it should continue, and argue that until those matters can be addressed people should stop focusing on Mueller. The third one was "building a counternarrative," in which the goal is to depict the investigation into Trump as part of a giant conspiracy between the Democratic Party, the FBI, the so-called "deep state" and establishment Republicans to reverse the outcome of the 2016 presidential election.

Oliver offered particular focus on the claims about Peter Strzok and Lisa Page, a pair of FBI officials who were revealed to have had an affair and who had expressed anti-Trump and pro-Hillary Clinton opinions privately. As Oliver pointed out, none of these things compromise the integrity of the investigation into Trump unless it can be proved that they somehow unfairly influenced how the investigation was conducted... and, as he noted, a review of their text messages by a Wall Street Journal reporter revealed no evidence that this had done so.

Despite this, however, Oliver noted that Strzok and Page had not been working on the case for over a year (one had been removed by Mueller, the other had not been involved anymore at that time anyway) — and yet this hasn't stopped Fox News from repeatedly bringing them up.

Oliver then segued into how Lou Dobbs had started insinuating that Rep. Trey Gowdy, R-S.C., Chair of the House Oversight and Government Reform Committee. Although Gowdy had led a congressional investigation into Benghazi and could thus hardly be considered a Hillary Clinton supporter, he acknowledged that the Trump campaign's complaint about the FBI using an informant to learn more about potential Russia connections was absurd. As a result, he had now been branded as a potential part of the so-called conspiracy against Trump.

Oliver then pivoted to what is perhaps the most troubling dimension of the Trump/Fox News axis on this issue — namely, the fact that even if the Mueller investigation does yield evidence that Trump broke the law, they will convince their viewers to refuse to acknowledge it.

"This machine is now running so aggressively that even evidence can't slow it down. And if you want more proof of that, just watch Hannity actively admit it in real time," Oliver told his audience before cutting to a clip of Hannity saying that even if the Mueller probe found proof that Trump had colluded with Russia, he wouldn't believe it.

Oliver identified that this had been demonstrated by Hannity spinning the fact that Donald Trump Jr. and other high-ranking members of the Trump campaign had met with a Kremlin-connected lawyer in June 2016 to dig up dirt on Hillary Clinton, but Hannity insisted that this was somehow Hillary Clinton's doing. The notion that Clinton would have wanted the Kremlin to destroy her own campaign was, as Oliver put it, the "Shittiest Conspiracy Theory Ever."

Then again, as Oliver noted, Trump and his allies on Fox News don't need to prove anything about Mueller in order to discredit the investigation. The point isn't that they're making strong arguments or weak ones, but rather that "they are just working the jury."

Considering that there is considerable circumstantial evidence that something improper occurred between the Trump campaign and Russia, and that the last president to officially commit treason was John Tyler (who did so during the Civil War in the early 1860s), it stands to reason that this is an incredibly important issue about which the truth ought to be revealed. Yet as Oliver observed, Trump's media allies are going to inordinate lengths to hamper an investigation intended to get to the bottom of it.

Chris Matthews details the parallels between Nixon and Trump.