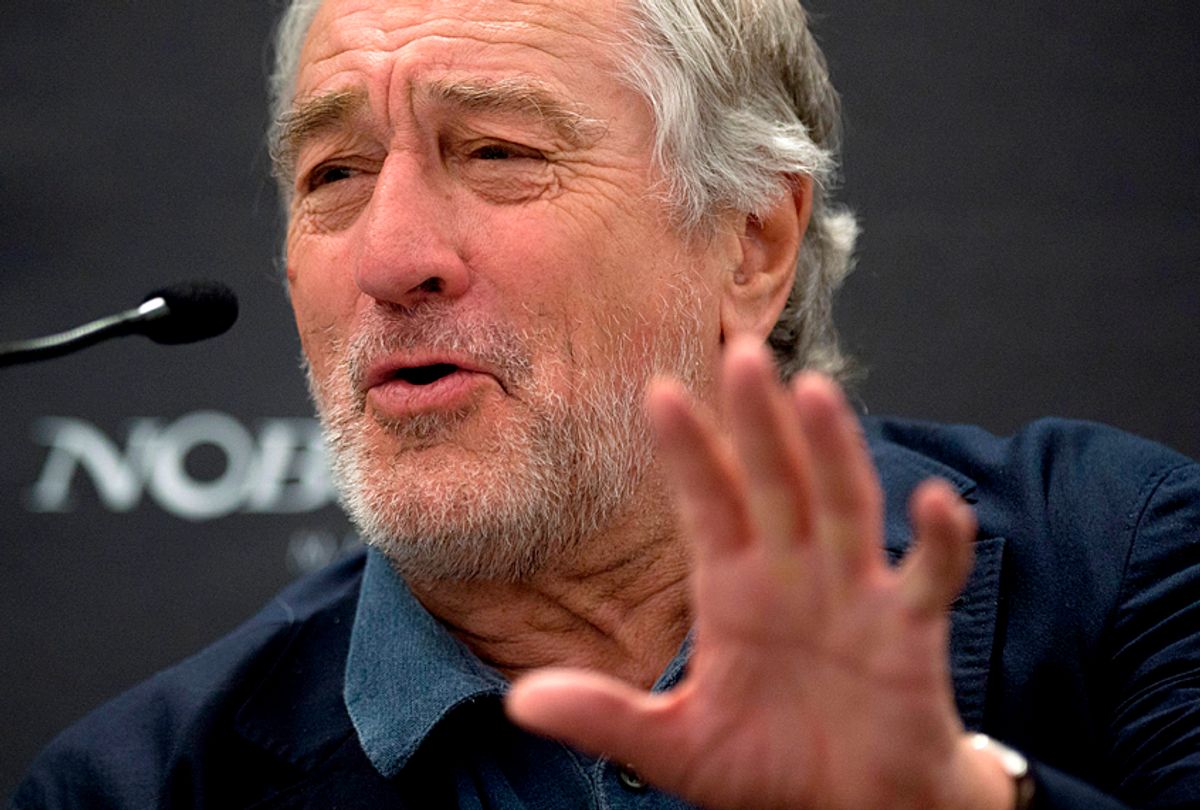 Robert De Niro was called upon to introduce Bruce Springsteen's musical performance at the 72nd Tony Awards Sunday night, but it was his introduction that was one of the award show's most memorable moments.

The audience erupted into roars, and the actor pumped his fists in the air. De Niro paused and waited for the applause and cheers to die down so his next words could be heard unequivocally: "It’s no longer down with Trump. It’s f**k Trump."

The crowd at Radio City Music Hall in New York City gave De Niro a sustained, standing ovation for his word choice and political statement, while CBS successfully bleeped out the expletive for the live telecast. In fact, after the show, many viewers watching from home wondered which profanity he used, twice.

But social media cleared it up:

Springsteen wasn't totally overshadowed. Once the audience settled, De Niro returned to Springsteen, who received a special Tony that night, presented by Billy Joel, for his critically acclaimed "Springsteen on Broadway."

"Now I'll get to my introduction," De Niro, a staunch Trump opponent said, and linked his own anti-Trump statement to the Boss' political commitment. "Bruce, you can rock the house like nobody else," he said. "And even more important in these perilous times, you rock the vote, always fighting for, in your own words, 'Truth, transparency, and integrity in government.' Boy, do we need that now."

De Niro turned to Springsteen's show. "Do you have any idea how hard it is to get tickets for Bruce Springsteen’s show on Broadway? It’s easier to get tickets for 'Hamilton,' and that’s got a much bigger cast, actual dancing and a history lesson," De Niro quipped. (Tickets are upwards of $850)

De Niro added that when he finally got the call to see Springsteen, he said, "'yes' without asking any questions."

Once Springsteen took the stage, he delivered a spoken word excerpt from his Broadway residency and performed a short, stripped-down rendition of "My Hometown" while playing the piano.

"I can't believe De Niro did that," he said. "Good for him. I mean, it's Robert De Niro. Who's gonna argue with him?" He added that Trump's presidency was "the Hitler mistake" that put a "borderline psychotic narcissist in the White House."

On "Salon Talks," Eve Ensler, Tony Award-winning director and creator of "The Vagina Monologues" spoke about the trauma of performing and creating in the Trump era. "What we have to be very careful about in this country right now is that we don't normalize this insanity, that we stay outraged, that we stay shocked."

Since President Donald Trump's ascent, no award show has gone by without some disparaging reference to him. Most famously, at the Golden Globes in Jan. 2017, Meryl Streep said, "There was one performance this year that stunned me," she said. "It was that moment when the person asking to sit in the most respected seat in our country imitated a disabled reporter, someone he outranked in privilege, power, and the capacity to fight back. It kind of broke my heart when I saw it. I still can't get it out of my head because it wasn't in a movie. It was real life."

"When the powerful use their position to bully others, we all lose," she added. And notoriously, Trump called Streep "overrated."

It seems President Donald Trump has yet to see the news of De Niro's insults, but it's likely that sometime today, a "pathetic De Niro, whose movies no one watches" tweet is coming.