"She can be likable or unlikable based on your experience," the actress and producer tells Salon 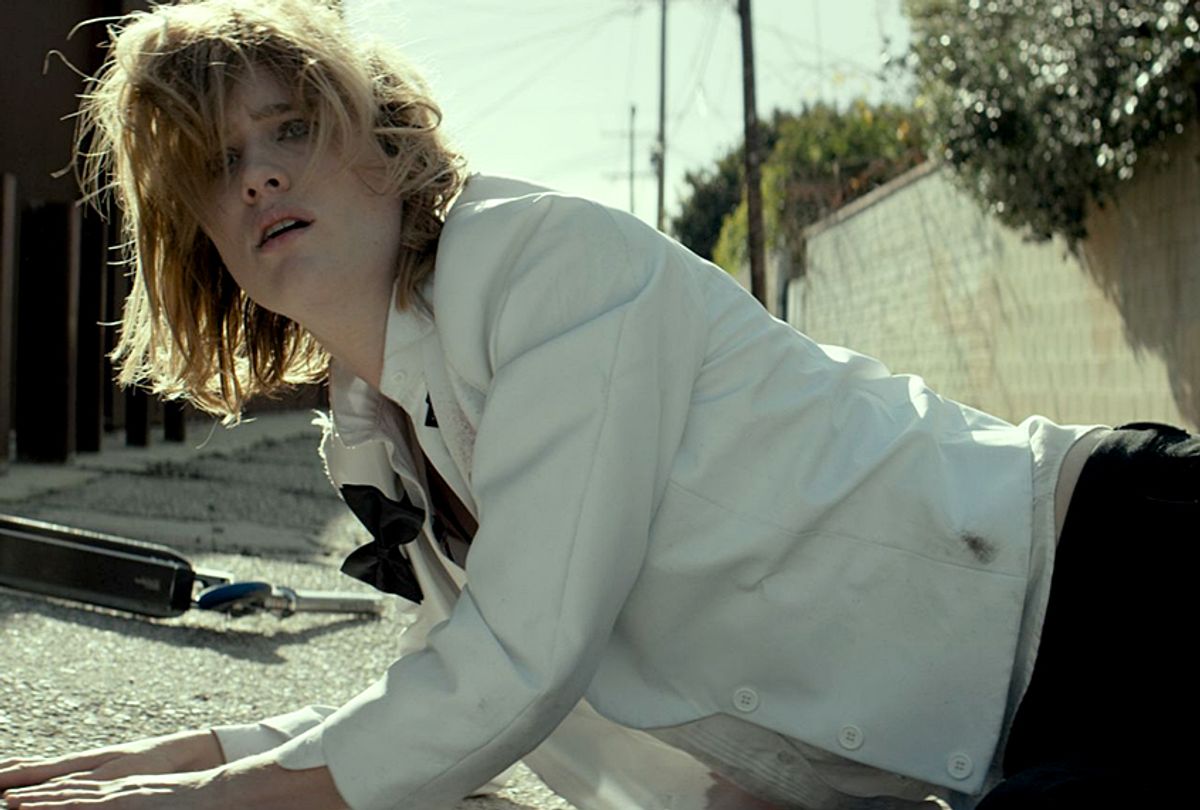 As Izzy, the disheveled title character in the amusing frustration comedy “Izzy Gets the F**k Across Town,” Mackenzie Davis takes almost all day to travel through Los Angeles. She wakes up in a stranger’s bedroom, returning to her friend Casey’s (Meghan Lennox) house, where she’s temporarily crashing, before visiting her buddy Walt’s (Haley Joel Osment) place en route to her sister Virginia’s (Carrie Coon) with detours along the way. Her ultimate goal is to get to her ex-boyfriend Roger’s (Alex Russell) parent’s house in Los Feliz, where he is getting engaged to Whitney (Sarah Goldberg), her former best friend, so she can “f**k some shit up.”

Davis is delightful as Izzy, a woman with no filter and less dignity. Still wearing her cater-waiter outfit from the night before — she remarks that stains are blood and wine — she steals a bike, borrows a razor scooter, and begs for rides all to accomplish a goal that everyone she meets says is ill-advised. But Izzy, determined as ever, forges on ahead, believing in fate and free will, setbacks be damned.

The actress, who also produced the film, shines in the title role. Davis is on course for a terrific year. Last month, she co-starred with Charlize Theron as the title character in “Tully,” and presently she is in Spain making a “Terminator” film. She took time out of her busy schedule to chat about “Izzy.”

Let’s start with the first question Izzy is asked: Where are you headed? You produced this film, so your career seems to be entering the next big phase.

I don’t know. I definitely think I want to have more control in my career in the production and making of films, although it’s a joke that actors want to direct. You get so emotionally involved and then 12-24 months later, you emerge . . . but I crave putting something together. It’s ownership and not just handing [yourself] over to people. It’s an interesting mind frame you find yourself in, when your image is used and you get turned into a model on photo shoots — I understand it’s a partnership and there is an exchange happening — but it’s about harnessing that.

Izzy is suffering a rough patch. How do you deal with difficult situations and frustration? Do you find them to be funny? Or do you shout profanities?

I don’t. I know it’s hard to reflect on yourself and how you react to things. I’m a pretty rational person and can hold it together, but I can open the fridge and a jar of jam can bounce loudly and I can [get upset]. So, it’s about straddling the line between complete control and utter devastation.

Izzy can be a drama queen. Do you think the film portrays her negatively? She’s seen as being promiscuous, foul-mouthed, and has a harsh encounter with a woman who chides her for smoking; she’s broke and begging for money/favors and has worn out her welcome with her best friend Casey after losing her prior best friend Whitney to her ex-boyfriend, and she’s not having it with her sister.

The cool and dangerous thing about the way we tell stories is that we are in the position as the audience to identify with the protagonist. There’s enough humanity with Izzy that you understand why she makes the decisions she makes. You’re located in this empathetic position from the beginning of the film. It’s good to do that with characters who are not traditionally likeable. She’s annoying and way over the top and really earnest and both a shitty and a good sister. She’s all sorts of things; she can be likable or unlikable based on your experience.

We’re not expected to judge her; were hoping people want to figure out why she is the way she is.

I asked that last question to talk about dignity. What do you think is Izzy’s rock bottom?

It’s when a fantasy becomes reality and she has to contend with this imaginary world she set up to justify the person she was and is. When she has a stark reckoning with her decisions, it’s her moment of growth.

What moment from your own life would you say was something Izzy might have done?

Getting too drunk at a party — but not getting into a fight. I’m not a lot like Izzy. I’m more embarrassing than violent. I’m trying to think of all the things she does . . . I counter that [drunken] shame with texts and phone calls, without it snowballing. My life is boring. This is why they do not make movies about my life.

“Izzy” is a road movie, even though it stays confined to a single city. Can you talk about the appeal of this episodic ensemble comedy? You get to play scenes with a dozen actors, and you recalibrate your performance with each encounter.

That goes back to the likability questions and the choices Izzy makes and if I like how the movie portrayed her. You’re not going to like her in some moments and you’re going to identity with her in others, and shift when she’s playing the daughter role, or when she becomes violent. I loved playing all the wacky moments.

You get to perform a song in the film. I like the emotional connection it creates. Do you have a musical background?

I am one of those people who in high school thought I had a really good voice, and then I grew up and thought, no, I don’t.

Izzy talks about “feeling”-sharing with Walt. How did you feel for Izzy, who is such a f**kup? What feelings would you tell her to share?

It’s hard because the lessons a person of her character needs to learn, she needs to love herself. You can’t cause someone to self-reflect. They need to stumble through these thoughts themselves. I’d tell her to stop looking outward for the way her life turned out. You can’t locate your frustrations in the external world. But she’s very fragile, I don’t know if she could take that.

She also discusses signs and fate and free will with Agatha (Alia Shawkat). Do you believe in those things?

Not really, but I think the power of believing in something is more impactful than the thing you believe in is. My friend did a Tarot reading for me the other day. Sometimes I care about them, and that day I did, and I got a lot out of the reading. But sometimes I do, and sometimes I don’t.

Izzy is easily irritated. What irritates you?

I can’t think of anything. This is the worst part of interviews.

Izzy says it’s tough to start over. How do you reinvent yourself?

I kind of think I’m not that good at that. I draw on myself. I try to do something totally inventive with each role. I put some expectation on myself to be a chameleon and then I go back to myself and how I relate to it. Each role hits a different note in your body, and depending on what that note is, and if you haven’t played it, it can open a new part of yourself.

Do you avoid listening to reason as Izzy does?

I think I’m too reasonable. I am an extremely rational person and sometimes I wish I was less rational. I land in the middle. I wish I was a little more explosive.

There is a speech in the film about life not turning out the way you expected. Izzy’s plans have failed her. How do you approach life? Are you living your dream—like Barack and Spielberg—as Agatha says in the film?

I have a really nice life with a house and a garden. My boyfriend is into gardening. We water each other. I love using lawn metaphors as double entendres. I’m doing a job I’ve wanted to do since I was five. I don’t know if it’s living the dream at the Barack or Spielberg level though.