Forget Stephen Miller and Sarah Sanders, dining-while-black is the real test of civility in America

Where were cries for civility when blacks were mistreated in restaurants like Denny's, Starbucks & Waffle House? 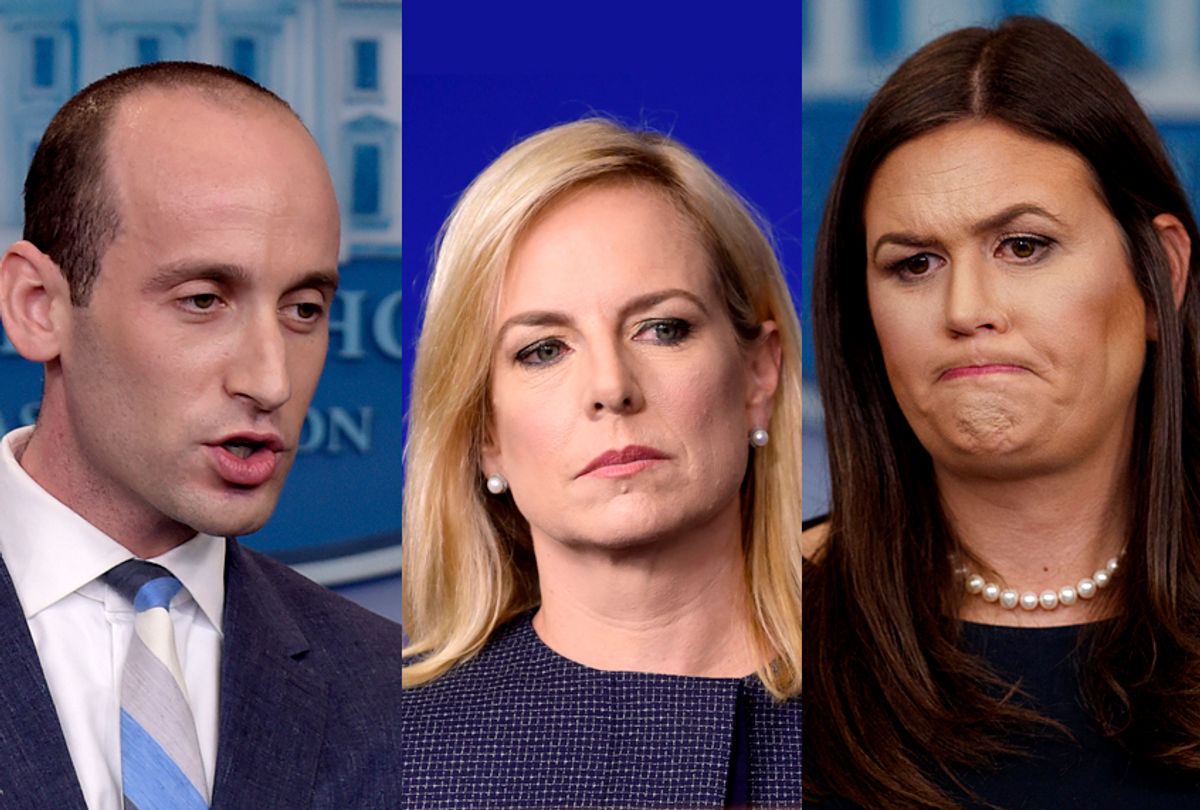 You want to know what all that pearl clutching over “civility” by the pusillanimous punditocracy has been about for the last few days? For a change, a white woman and her family were refused service at a restaurant. Sarah Huckabee Sanders, who had spent most of the previous week lying her way through a pathetic defense of Trump’s inhumane border policy, and the entirety of her career as Trump’s press secretary lying every day before that, was politely asked to leave the Red Hen Restaurant in Lexington, Virginia by the manager. The drinks and cheese plate Sanders and her party had already ordered were comped.

Because Trump’s press secretary was kicked out of a restaurant by the staff, who refused to countenance the anti-gay agenda she and her boss support (among other things), now everyone is being told that they have to maintain “civility” when dealing with these loyal servants of Trump’s authoritarian rule in the White House.

Hey, you nasty people in the resistance! Listen up! No more shouting “shame” at Secretary of Homeland Security Kirstjen Nielsen at upscale Washington D.C. Mexican restaurants! It’s way out of bounds to call out, “end Texas concentration camps” to the Trump official who is enforcing them.

And whatever you do, leave the poor architect of Trump’s “zero tolerance” border policy alone. Forget the fact that White House aide Stephen Miller has told friends he enjoys seeing photographs of crying kids on the border. Miller is no longer to be called “a real-life fascist begging money for new cages” as he was last weekend at yet another upscale Mexican eatery in Washington, even if that’s exactly what he has been advocating.

Because, you know: civility.

Shaming the Trumpsters and the rest of the Republican obsequious oligarchy, like Mitch McConnell and his soul-mate Elaine Chao, well, it’s just not good “strategy.” As a political tactic, making life miserable for these hypocritical hellhounds to punish them for their shameful policies and politics is a loser. Trump can bang-on about beating the shit out of protesters at his rallies, white supremacist rock stars like Milos Yiannopoulos can call for vigilante squads to gun down journalists, but we’re supposed to maintain proper “civility.”

What planet are we on, people? How short is our memory? Has everyone forgotten that in April of this year, two black customers at a Starbucks in Philadelphia were arrested and escorted from the premises for the crime of sitting down and waiting for a friend to arrive before ordering? They were handcuffed and led out of the Starbucks by at least six armed police officers wearing body armor.

In fact, black people are treated cruelly at restaurants and refused service all the time. Sure, the corporations that own the big chains express chagrin and announce campaigns of sensitivity training for their employees. But what you haven’t heard from anyone at all has been a call for “civility,” because treating black people uncivilly has such a long history in this country, it has gone practically unnoticed until cell phone videos came along to provide proof.

What kind of “civility” was shown to Johnny Wimbrey, a popular black motivational speaker, and his wife at the Sambuca 360 restaurant in Plano Texas last month, when they were told by the restaurant’s manager to get up from their table and give it to a white customer? They had been seated, given menus, and were about to order when the restaurant manager demanded that they give up their table. When King refused, the manager told him, “You can pay the tab, you are leaving,” according to a report of the incident in The Grio. The confrontation, recorded on a cell phone, got uglier from there.

“Why am I leaving?” asked Wimbrey.

“What did I do wrong?” Wimbrey asked.

“I tell you to leave right now or I will call the police,” the manager answered.

“What did I do wrong?” asked Wimbrey again.

“You need to leave now. What you are doing wrong is trespassing,” said the manager.

According to The Grio, the manager then called the police, but Wimbrey and his wife left before they arrived.

A little different from the way dear Ms. Sanders was treated at the Red Hen, wouldn’t you say?

Where was the outcry for “civility” when a black woman in Pinson, Alabama, was refused service at a Waffle House on April 28 of this year? According to Newsweek, Jacinda Mitchell took a video that showed the doors to the Waffle House were locked when they saw her outside.

Or how about the group of black customers who were told they had to pay before their food was brought to the table at a Denny’s Restaurant in Tacoma, Washington in October of 2017. Did you hear anyone yapping about “civility” when they were treated like shit? According to an account given to The News Tribune, two black men were kept waiting for ten minutes while white customers who arrived after them were seated in a nearly empty restaurant around 10 p.m. one night. According to a Facebook post put up by another customer, the waitress took their orders and walked away, but quickly returned to their table.

“She then asks for them to pay before the cook will prepare their food,” the customer reported on Facebook. “She says that she has had several people order food and leave without paying so her manager said she had to have them pay first.”

Denny’s has a long and uncivil history with black customers. Six black Secret Service agents sued the chain in 1993 after they were refused service at a Denny’s in Annapolis, Maryland in April of that year while they were there preparing for a visit by President Clinton. They were in a party with 15 other Secret Service agents, all of them white, and all of the white agents were served at the Denny’s.

According to the New York Times, in 1994, the Denny’s chain settled a lawsuit filed by “thousands” of black customers who were refused service, had been made to wait longer or pay more than white customers. “In one instance,” according to the Times, “a black Federal judge from Houston and his wife, who had been traveling for 18 hours, said they were forced to wait in a Denny’s in Yreka, California, for almost an hour as white teenagers taunted them and referred to them as ‘niggers.’” The chain paid $54 million to settle the class action suit and signed a consent decree promising “to improve its treatment of blacks,” according to the Times. In another California case, a black teenage girl was forced to pay a cover charge and pre-pay for her meal at a Denny’s when she visited the restaurant with several white friends who did not have to make similar payments.

Nowhere in the settlement of the suit or in the coverage of the story did the word “civility” appear.

In 2013, a black man and his party of 25 friends were asked to leave a Wild Wings Cafe in Charleston, South Carolina, after a white customer complained of being threatened, according to a report in USA Today.

The group had waited two hours to be seated when a manager approached and asked them to leave. "The manager looked me dead in the face and said she was refusing us service because she had a right to and simply she felt like it,” Michael Brown wrote in a Facebook post. “We're sitting there peaceably for two hours," Brown told WCSC TV in Charleston in an interview after the incident. "Obviously, if we were causing any conflict, we would have been ejected out of the place hours before."

But listen, people. You are to keep your big traps shut the next time you see one of Trump’s loyal army of public servants who are carrying out policies like separating toddlers and children from their parents at the border, or banning transgender Americans from serving in our military, or advocating removing coverage of pre-existing conditions from policies provided under the Affordable Care Act, or defunding Planned Parenthood. Sanders, and Nielsen, and Miller, and Bolton, and Kelly and the rest of them, they’re just loyal public servants following orders! Leave them the hell alone!

Because, you know: civility.

But black people? Have at’em.