The folks on Trump's list of SCOTUS nominees are bought-and-paid-for right-wing corporate hacks; we must resist 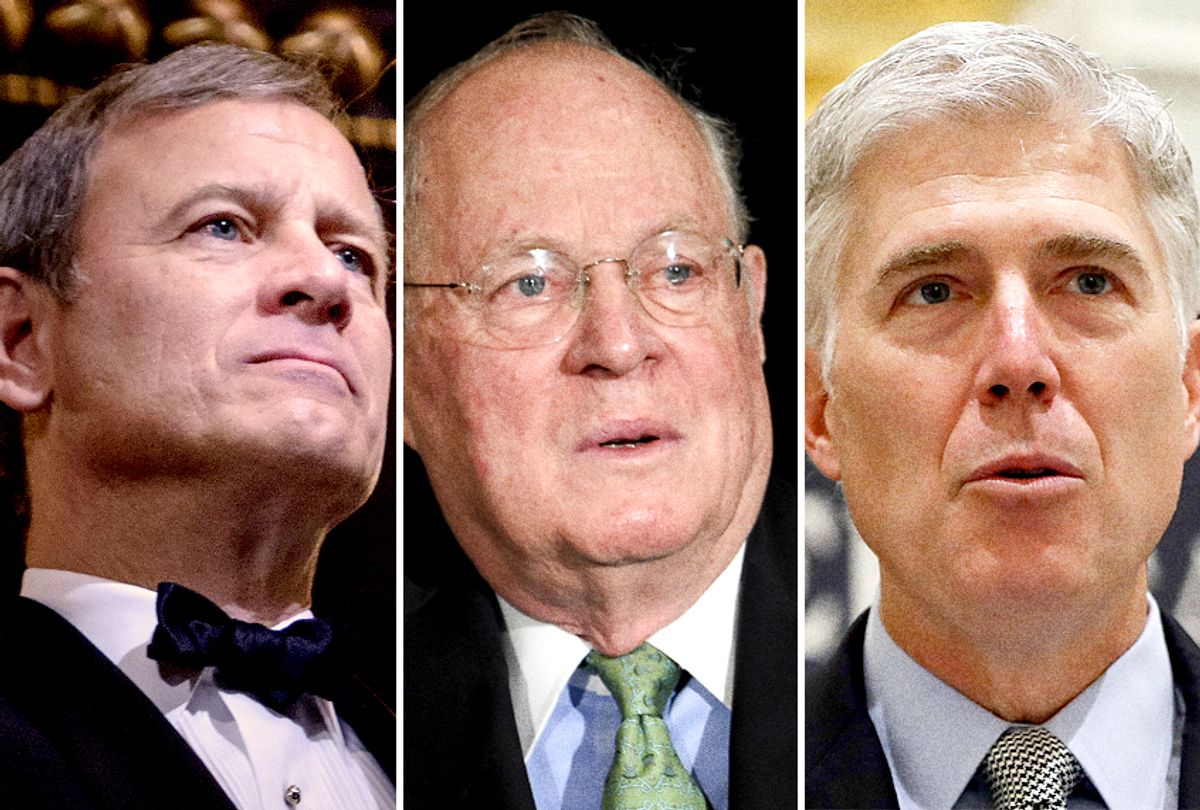 Over the last four or five decades, every time a Supreme Court vacancy opens up, our democracy engages in a great throat-clearing, and for a brief moment the motivations of our political players are on full display.

The resignation of Justice Anthony Kennedy this week is giving us another look at the health of our democratic system, and it doesn’t look good. The sickness was evident the last time around, when Majority Leader Mitch McConnell and Senate Republicans refused to give a hearing to President Obama’s 2016 nominee to the seat freed up by the death of Antonin Scalia.

There the court has stood, with a five-to-four Republican-appointed conservative majority, now driven even further right with Trump’s appointment of the smiling liar Neil Gorsuch, and now he gets to fill Kennedy’s squishy conservative seat (his votes to uphold Roe v Wade and on gay rights have driven Republicans insane).

Right-wing Republicans established an entirely new right-wing “legal” organization, the Federalist Society, to watch over the Court. And the conservative think tank stalwart Heritage Foundation has played and is playing again a major role in insuring Trump’s pick to replace Kennedy is far right enough. The Heritage Foundation is funded by such wealthy right-wingers as the Olin Foundation and the DeVos Foundation, and $28 million was provided in 2016 by the Scaife Foundation, founded by far-right billionaire (and Clinton hater) Richard Mellon Scaife.

They want a bulwark against voters, that’s why. The other two branches in our famous “three-legged stool” of a constitutional system, the Executive and the Legislative, are elected by voters. Every year, voters are getting younger, and more female, and browner and blacker.

Let’s take a look back at what the Supreme Court used to be. It used to be an institution that took on great issues and came down with findings that established great principles. Look at Brown v Board of Education. Before Brown, school systems around the country, not just in the South, could openly and freely segregate themselves, and did. The “Board of Education” in Brown was the Topeka, Kansas, board of education. It wasn’t in the South. It was right there in the so-called “Heartland,” and out there in Kansas, they were segregating schools, municipal pools, parks, recreation centers, all sorts of things. But Brown changed all that, and they did it in a nine-to-zero unanimous vote. The Supreme Court stood up and told the nation, this is wrong, and it’s going to stop.

The Supreme Court did the same thing in the early 1960s with school prayer, in the Engel v Vitale decision outlawing the reading of a state-written prayer in schools (6-1), and in Abington School District v Schempp, prohibiting Bible reading in schools, eight-to-one. A few years later, in Loving v Virginia, the court held in a nine-to-zero decision that states could not outlaw marriage between whites and African-Americans.

What has the current Supreme Court given us?

Well, they have taken an itty-bitty little chisel and an itty-bitty little hammer, and they have chipped away at some of the great laws that were passed over the last 70 years giving rights to people who were denied those rights before. The Voting Rights Act was passed with the blood of civil rights workers sprayed all over it. What was going on in the South? Black people were denied the right to vote outright, or permitted to vote only under absurd restrictions designed to lower the number of black voters to near zero. The Voting Rights Act changed that. But what did the Supreme Court of Chief Justice Roberts do? Well, in Shelby County v Holder, they found five-to-four that the clause making enforcement of the Voting Rights Act possible was unconstitutional, because things had allegedly changed in the South.

And what happened after Shelby? Southern states, and many Republican-led states in the North, immediately passed voter ID laws and other restrictive measures intended to make voting by minorities more difficult. In Pennsylvania, a federal court found that the legislature had a specifically racist intent with the voting restrictions they passed.

In Citizens United v FEC, the Roberts court in another five-to-four decision suddenly found in the Constitution free speech rights for corporations, and they untethered election spending from restrictions that had worked for generations. Republicans got cute with their reasoning, adopting positions long taken by liberals to justify unleashing billions of corporate dollars into our elections. “There is no such thing as too much speech,” the thin conservative majority said. Justice John Paul Stevens, in a blistering dissent, mocked that reasoning, and criticized Roberts himself for opening up the case in order to reach as broad a decision as possible. Roberts forced the court to consider issues not even mentioned by the plaintiffs, but they were issues championed by corporate lackeys like the Heritage Foundation. “A democracy cannot function effectively when its constituent members believe laws are being bought and sold,” Stevens wrote.

What have we seen since Citizens United? Not only the buying and selling of laws, but of the politicians who write them.

Now in its latest chiseling away at legal precedent, in yet another five-to-four vote, the Roberts court has given us a decision stripping public employee labor unions of pretty much all of their political clout in Janus v AFSCME, preventing them from collecting dues from all of their members.

In Husted v A. Philip Randolph Institute, the Roberts court found five-to-four that Ohio could purge voters from voter rolls in a way that lower courts found to disadvantage minority communities.

In Abbot v Perez, another five-to-four decision, the Roberts court upheld a gerrymandered Texas election map that lower courts had found was drawn specifically to disenfranchise black and Latino voters.

In Epic Systems Corp v Lewis, the Roberts court once again voted five-to-four in a case that made it legal for employers to require hirees, as a condition of their employment, to waive their rights to participate in class action lawsuits or class arbitrations. This decision means that employees will have to sue one at a time when they’re being cheated out of pay or discriminated against in some other way, making it much more difficult to control discriminatory corporate behavior.

In another narrow five-to-four decision, National Institute of Family and Life Advocates v Becerra, Roberts and the other Republican-appointed justices found against a California law that had required so-called “crisis pregnancy centers” to inform women seeking help that abortion was an option for them. Once again, the court used spurious “free speech” grounds in its decision, ruling that the state could not compel speech by the centers, ignoring precedent that plenty of “required speech” has been upheld in consumer protection cases.

In a single year, conservative Supreme Court justices voted in favor of corporations, against labor unions, against individual workers, against women and against the rights of voters. None of those cases found big, historical rights for individuals or oppressed groups. All of the decisions were narrow, small victories of five against four. The cases themselves were niggling and small, and the votes were bitter little burps of grievance and revenge, evidence that “conservatives” in this country are staking their reputations and their honor on taking things away from people.

The Federalist Society and the Heritage Foundation are intellectual Band-Aids covering festering sores of racism and sexism in our legal and economic systems. These guys know that the day is rapidly approaching when there will be more voters who are brown or black than there will be white voters. They’re using the only unelected branch of government, the courts, to protect stuff they won’t be able to protect at the ballot box.

The last time around, Neil Gorsuch sat there before the Senate Judiciary Committee and swore how much he valued legal precedents and the rule of law. Then he took his seat on the Supreme Court and started voting to overturn one precedent after another, and to strip rights from one oppressed group after another. The nominee Trump soon appoints will do the same thing. This nominee will lie straight to our faces, and then take a seat on the court and start working for their political and corporate masters. It’s what they do. It’s who they are.

They’re going to scrimp and nibble and chip and fight for every little scrap of America they can hang onto. The only way to stop them is at the ballot box. They’re doing their best to make that as difficult as possible, and they’re using the Supreme Court to do it. What they’re doing isn’t just anti-democratic. It’s authoritarian at its core. They don’t believe in the Constitution except as the agreed-upon rule book  to achieve their narrow, selfish little ends.