On "GLOW," Welfare Queen vs. Liberty Belle is a fight bigger than the ring

What does a mother sacrifice for her children and her own joy? "Mother of All Matches" speaks to that question 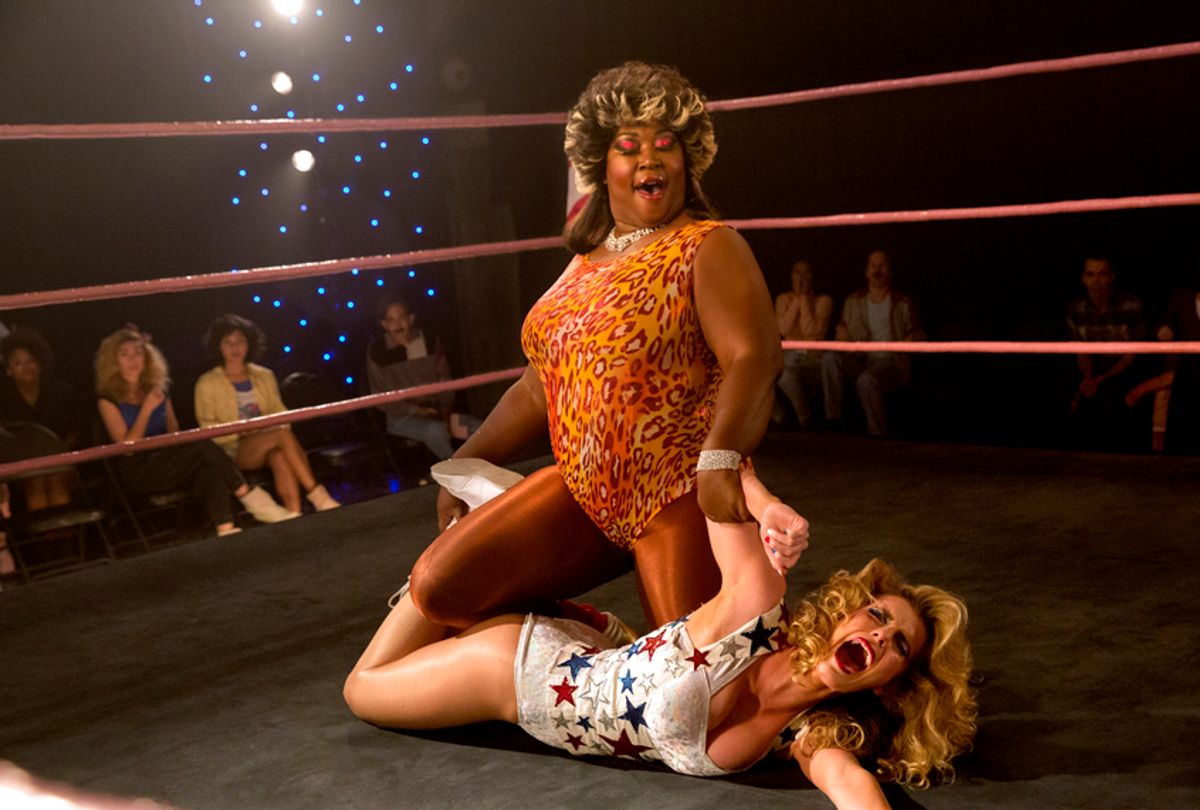 Spoiler alert: Have you watched season 2 of "GLOW"? No? Stop reading now or be spoiled.

A mother’s sacrifice wears many faces and dons numerous costumes. Depending on the skin you’re born in, the sum of that sacrifice can be greater than that made by one woman. Sometimes her story stands for mothers everywhere, for better or worse. Sometimes she’s a symbol for the determination and fears of mothers everywhere. And some bear the load of an entire people’s dignity.

That’s a lot of profundity to assign to an episode of “GLOW,” Netflix’s breezy feel-good comedy about an all-female wrestling team set in the 1980s. But in a show that’s as much about what it means to be a woman muscling her way through a man’s game, inside and outside of the ring, a skillful view of motherhood and the weight of its responsibility isn’t out of bounds.

“Mother of All Matches,” the fourth episode of season 2, takes a longer, wider view of what it takes to be a mother by incorporating the dynamics of race and economics into its equation, comparing the lives of Gorgeous Ladies of Wrestling star Debbie Eagan, aka Liberty Belle (Betty Gilpin) and Tammé Dawson (Kia Stevens) known to fans as The Welfare Queen.

This episode resolves the last-minute twist of season 1’s title bout, where Welfare Queen snatches the crown from Liberty Belle and runs off with it. The rivalry played up inside the ring between these characters does not exist between the women who play them. In fact, out of all of the women on the team, Tammé and Debbie have the most regular television experience, with Tammé working as an audience coordinator for “Family Feud” and Debbie playing a memorable part on a soap opera.

Right there, though, we see the differences between the lives of these two women: Debbie is an actress with limited fame who has a lovely home in the suburbs and, until recently, a marriage to a stable breadwinner. She also closely resembles what has long been sold as the American feminine ideal: blonde, thin and tall.

Tammé is a middle-aged, heavy-set dark skinned woman who is proud of having raised a son, Earnest (Eli Goree), who is attending Stanford on a full scholarship. Debbie has a son, too, an infant named Randy.

Debbie also gets to play an American superhero, Liberty Belle, one of the “face” wrestlers of “GLOW.” Liberty Belle, as announcer/producer Bash (Chris Lowell) describers her, is “more American than a slice of apple pie baking on the back seat of Bruce Springsteen’s Chevy on 4th of July.”

Tammé’s Welfare Queen is the heel, obviously, as quintessentially 1985 as Ruth Wilder’s Zoya the Destroya (Alison Brie). “She’s the craziest and the laziest!” the announcer bellows, and Tammé hams up her act, lapping up the audience’s boos like a kitten takes to cream.

After the match is over, however, Ruth and Debbie can put Zoya and Liberty away in a closet and become themselves.

But there will always be a significant portion of America that sees no difference between Tammé and the caricature she plays. That's the reality of being black and female in America, then and now, in true life and in fiction.

But enduring that reality, one seen in “Mother of All Matches,” sometimes means tricking oneself into swallowing one’s pride and sacrificing one’s dignity.

Every black person in this country has a story of relatives — mothers, fathers, grandmothers and grandfathers — who had to bite their tongues to bleeding in order to make sure their lives and the lives of their children would somehow be better. And this is also true for Tammé, who in previous episodes alludes to the lengthy list of less-than-glamorous jobs she’s held before scoring one that she relishes.

The catch is that the role is a stereotype, a dirty secret, a secret identity she can indulge knowing that nobody’s watching. Except that’s not true. People are watching. And soon that audience includes her own son.

“Mother of All Matches” is the show’s first deep look at Tammé, but it also allows “GLOW” to face the hard reality of the price women of color pay for daring to show their strength. Professional wrestling is a funhouse vision of America’s vices and sins made flesh, and stereotypes are its rocket fuel.

Stevens has some experience with this fact. The only “GLOW” cast member who has a past in professional wrestling, Stevens performed in Japan under the names “Kong” and “Amazing Kong,” names chosen for her and ones she understandably resented. But she loves wrestling, and going pro was her dream. She had to choose between living her dream and refusing a role because of a name with denigrating connotations.

Her shield, and Tammé’s, is that in wrestling, everyone is in on the joke.

“I’m not the only offensive character,” Tammé tells a horrified Earnest after a stranger refers to her as Welfare Queen in his presence. “Everyone’s offensive.”

He isn’t convinced. “Sounds like you’re playing a minstrel character on public television,” he says.

And he’s not wrong. Nearly all of the women of color in the troupe are living, breathing stereotypes. Arthie Premkumar (Sunita Mani) is of Indian heritage, but she’s assigned the role of Beirut, a Middle Eastern terrorist.

The newest recruit, Yolanda (Shakira Barrera), is a Latina woman shoved into the costume of Junkchain, a part previously played by a black actress, Cherry Bang (Sydelle Noel), who returns to become Black Magic, a voodoo priestess. Jenny Chey (Ellen Wong), the other Asian woman on the team, folds into Fortune Cookie. All of them are heels.

But “Mother of All Matches” does not apologize for this. Instead, writer Kim Rosenstock uses these truths to demonstrate how some of these women are made to compromise their dignity for a job they love doing more than others. And in this respect, juxtaposing Tammé’s life against Debbie’s is a smart ploy.

We see Debbie drop Randy off at daycare, fussing about all the work she has to do — which consists of painting her nails, watching exercise videos and practicing her victory speech.

Before this, we see Tammé in a car before dawn, ready to drive the first half of a 12-hour round trip so she can spend three hours with Earnest. She pulls through a fast food drive-through and commiserates with the worker at the window — also a mother, and one who is at the end of her 10-hour shift.

Somewhat predictably, out of these three women, it’s Debbie who is the most miserable. Her husband has left her for another woman who, in this same episode, sends Debbie into a spiral by calling her up to find out the brand and model of the bed she once shared with her cheating ex. She responds in grand comedic fashion by hosting a spur of the moment estate sale and selling every stick of furniture she has for pennies on the dollar.

Looking at it one way, Debbie can be seen as having a “Waiting to Exhale” moment, as a woman on the verge of God only knows, reclaiming her space in one reckless swoop.

Then again, for a woman who has to drive half of a calendar day to see her son, Debbie's exhale is the act of a spoiled rich girl. Can she sit on her anger? Sleep on it? Will it keep her warm? Grand outrageous gestures like that are a luxury only the rich can afford.

It’s safe to say that none of these women — not Debbie, not Tammé, not the lady at the drive through — thought their lives would bring them to where they are now. As mothers, however, they can only keep slogging forward to grab on to something worth having, not only for themselves, but for their children.

Knowing all that makes the climactic moment when Liberty Belle seizes the crown from Welfare Queen anything but triumphant. The defiant Tammé, who disappears into her character as the bout begins, shatters when she sees her son’s horrified expression at watching his mother bound around a wrestling ring to entertain jeering strangers.

Late in the match, the tides turn as scripted, and Liberty Belle wins. The tears streaming down Tammé’s face as Liberty Belle, golden-haired defender of the American Way, leads the audience in a chant of “Get a job! Get a job!” as she derisively hangs a fast food worker’s apron around Welfare Queen’s neck, are real.

But Earnest, the thoughtful son, recognizes the sacrifice, the compromise. He has his own version to endure at Stanford, seen when a well-meaning white classmate greets him as Tyler, a kid who’s significantly shorter and has a much lighter complexion. There are only two black kids in the class they all share. And yet.

Earnest refuses to punish his mother, choosing instead to notice what she loves about it. “I can’t believe you did that. Wrestling. You threw a white girl across a ring. When did you get that strong? I don’t think I’ve ever seen you exercise.”

Then Tammé's son rewards his mother by taking her out to the dinner she’s spent a lifetime earning.

Salon talks to documentary director Kevin Macdonald about his documentary on the late pop music legend.