How Marc Maron and Alison Brie tag team on "GLOW" 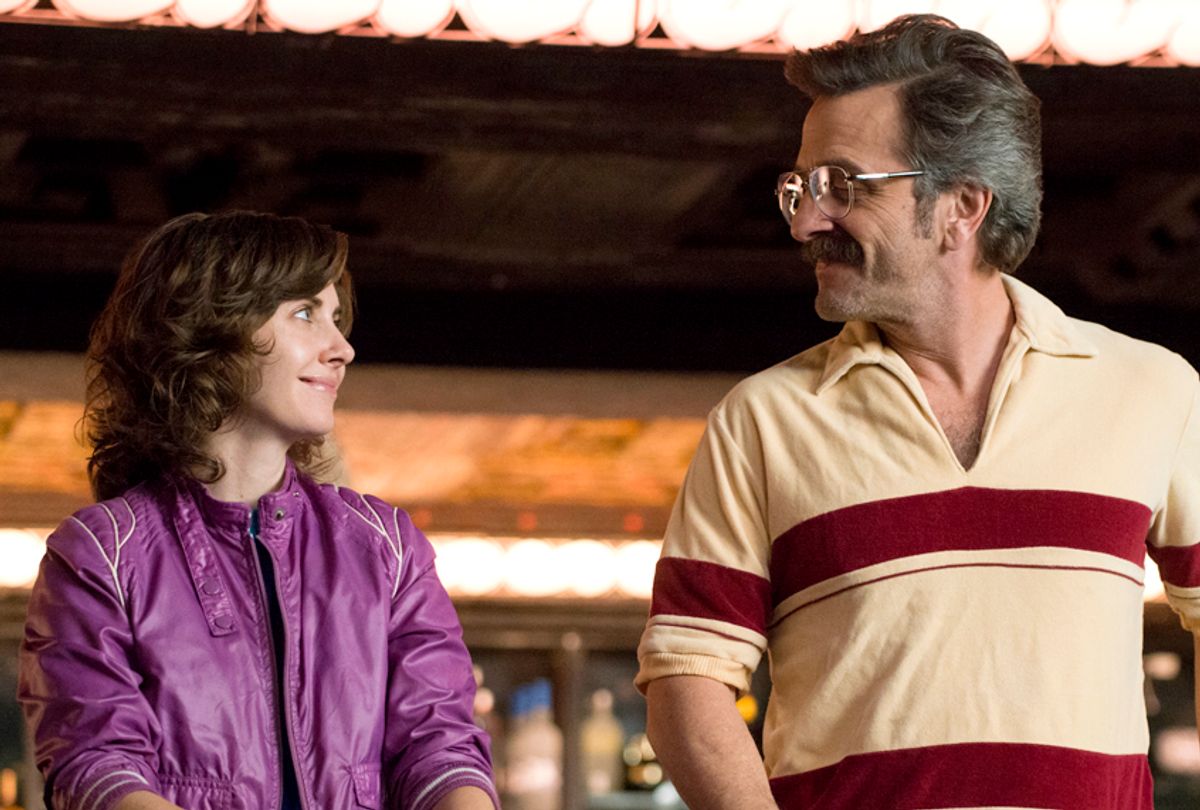 In the wrestling ring a balanced partnership is key. Heels don't always lose. The Face cannot be flawless, or else she'd be boring. Success relies on emulating the endless advance and retreat of classic conflicts, the tug of war between heroes and villains inspired by caricatures and stereotypes. In Netflix’s 1980s-set wrestling comedy “GLOW,” Liberty Belle (Betty Gilpin) and Zoya the Destroya (Alison Brie) are stand-ins for the Cold War conflict between Ronald Reagan’s U.S. and Mikhail Gorbachev’s U.S.S.R.

Outside the ring and at the top of season 2, the main rivalry pits Ruth, the perky actress behind Zoya, against Sam Sylvia (Marc Maron), the cranky director running the wrestling show. The rub is that Sam doesn’t actually despise Ruth — he’s just threatened by her. When she steps beyond her boundaries, doing a part of his job better than he does, he reacts by benching her. When she acts upon good ideas and they succeed, Sam blows his top.

“Sam's confidence is limited to ego and selfishness,” admits Maron, who spoke to Salon alongside Brie at a recent press event. “Even right at the beginning, which is a pretty horrible onslaught of male nastiness, it seems to come more out of being threatened.”

In spite of how this reads, Maron’s character is a major reason that the new episodes of “GLOW” leave a viewer feeling bright as opposed to hostile, depressed or under siege. Despite his many faults, watching Sam actually makes a woman feel better about men — because even when he’s at his worst, he still has Ruth’s back.

All wrestling enterprises succeed or fail on the strength of the partnership between the people squaring off in the ring. But away from the production, as I sat in the presence of Maron and Brie for our interview, it was clear that their onscreen chemistry comes from a place of genuine conviviality.

In one exchange, Brie recalled a low point of doing press interviews last spring for the show’s first season. “We were constantly getting asked [questions] like, ‘So you're saying it's empowering, but you're wearing nothing?’”

“But then,” Maron interjects, “do they watch wrestling, though?"

“These were clearly people who had not really seen the show or didn't understand it,” Brie said. “Always these questions were asked by male journalists. But they had only seen our trailers. They were trying to imply that we were sexualizing or sexually exploiting ourselves for the sake of our show. And we were like, ‘that's not what the show is about at all. You're missing the point.’”

“I know as a man with male gaze, that wasn't happening,” Maron adds. “But the original one, too! When you watch that, that was so raw. . . . Once the women start wrestling, it's hard to sexualize them.”

“GLOW” definitely exudes a fighting spirit, but it’s also as fair in its depiction of its central male characters as it is to its women. Given the contentious age that we find ourselves in, where men question the veracity of women coming forward with claims of sexual harassment and abuse, to see the new season grapple with issues of power in the workplace and Hollywood sexism without sacrificing its heart and humor is a relief.

The second season of “GLOW,” now streaming on Netflix, evolves the story from a tale of female empowerment through athletic performance, heroic identity and sisterhood into a narrative that acknowledges that even those propellants can be stymied by institutional obstacles.

On local television in Los Angeles, “GLOW” becomes a cult hit, gaining a small but weirdly rabid fanbase. Some of the women love the attention, others are less than thrilled.

Now that the team is working for a network, they’re also crashing into the limitations that come with being beholden to a male-dominated structure. Sam has the power as the director of “GLOW,” and their resident emcee and producer Sebastian "Bash" Howard (Chris Lowell) keeps them paid. But just as they set their sights on expanding, the Gorgeous Ladies of Wrestling slam into walls, mostly because the men in charge don’t take them seriously. Even Debbie’s input is ignored at first — and she negotiates an executive producer title into her contract.

“They're hitting that glass ceiling," Brie said. "They're saying, ‘Here's everything we're going to do,’ but they have actual male characters telling them, ‘No, you're not going to do those things. Or if you'd like to, I expect sex in return.’”

Brie, Maron and the other cast members stress that the new season was written before #MeToo broke, although the series was shooting while the major news about Harvey Weinstein came out, creating a domino effect throughout Hollywood that never hit their set.

“It felt really good, just to come to work on our set every day, and to go through this whole period of time not thinking, ‘Who's going to get fired at our job?’ Or, ‘Who's made me uncomfortable at work?'" said Brie, adding, "It's nonexistent on our set, on a set run by women. It also made me realize what a bubble we're in.”

Showrunners and co-creators Liz Flahive and Carly Mensch also take care to ensure that the men of “GLOW” are as wholly realized and appealing as its women.

Sam, as Maron mentioned, is a jerk. But he also has feelings for Ruth he can’t place, not to mention he's contending with the previously unexplored role of father figure that leads him to support Ruth, refusing to give in to an executive who puts her in a sexually compromising position. In contrast, it’s Gilpin’s Debbie, not Sam, who blames Ruth for not playing along.

“It was really important that we show that on the show, and sort of the systematic way that women have been made to feel like that's a necessary part of their job, so much so that they would tell other women that that's what they should be doing as well,” Brie explained.

Inevitably, “GLOW” will be viewed in the context of our explosive social climate. Neither Brie nor Maron seem to mind the association, likely because they know the struggles portrayed in this season have a timelessness to them, for better or worse.

“When we're shooting the show I always feel like times have changed and it's all different now. And then I have to kind of take stock even between seasons as soon as I'm looking for other jobs in between; I'm going like, oh no, it's just our show,” Brie said, quickly conceding. “It's not just our show. Obviously, there's ‘Orange Is the New Black.’ And of course, Jenji Kohan is a producer on our show, and the creator of that show. She's very much at the forefront of putting women behind the camera in power.”

Maron sees additional qualities that makes “GLOW” unique among current series. “They're heartbroken characters,” he says. “All these people are struggling with not just kind of becoming superheroes, but becoming these almost mythological beings who wrestle. And that’s being played against their real lives.”

Sam, meanwhile, is contending with merely being human. “This season he’s pretty humbled,” Maron explains. "He has a problem with authority, like his power is sort of tempered by the fact that he doesn't like having a boss. So I don't know, it seems like he's ultimately more in line with the women than he is with really having control of the situation.”

"There is an element of Sam that is a fundamentally selfish, somewhat threatened male," Maron adds. "But I don't know that that's the average. He doesn’t represent the worst of men. He could be a lot worse. There is a balance, know what I mean?”