"GLOW" returns to Netflix with an excellent season 2, right when we need it

Heartfelt and neon-bright, the new season is exactly what we need when we're feeling down for the count 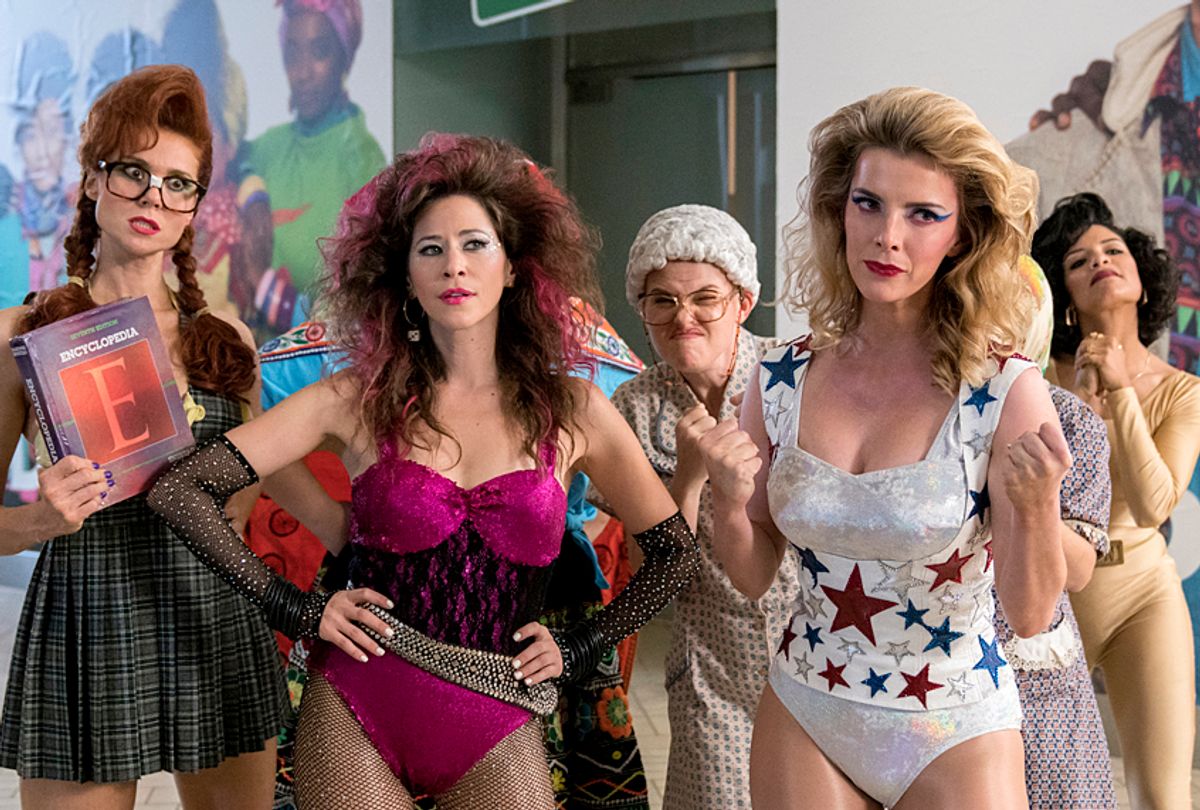 Professional wrestlers have an unspoken covenant with the audience, dictating that although the bouts they’re presenting are scripted, the athleticism and drama on display in the ring is very real.

Therefore, fans can hold true certain expectations but, inevitably, the heroes may fall to the heels, and some last minute turn of events can change everything. The storylines are established, but outcomes are nevertheless unpredictable.

So it goes with the second season of “GLOW,” resuming our view into the developing saga of the Gorgeous Ladies of Wrestling -- the fictional version, we should say. Though the stories of its characters continue apace, and certain aspects of the first season repeat (it’s a wrestling series, so there always has to be a gigantic showstopping bout), it still manages to surprise in the best way possible. Wrestling is heroic entertainment fueled by stories of physical triumph; there's an energy exuding from the very marrow of this show.

Netflix’s “GLOW,” returning Friday with a 10-episode second season, works because it’s much more about the narrative than the knocks in the ring, and specifically the narrative of women in relationship with one another.

Dramatic examinations of power dynamics abound on television these days, a number of them framing those views with the context of our current and greatly fraught political landscape. “GLOW” is a period piece, one based on a campy female wrestling outfit that enjoyed a short run of popularity on syndicated television between 1986 until 1990. But it wraps its arms around many issues dominating current discussions about female empowerment in the workplace and behind closed doors.

The action portrayed here may be set in a version of Los Angeles that existed more than three decades ago, but Ruth Wilder (Alison Brie), Debbie Eagan (Betty Gilpin), Sam Sylvia (Marc Maron) and their cohorts still confront the same struggles that need to be taken seriously in any enterprise fronted by women now.

Not much has changed, fundamentally. Women know this and are fed up with it. Plenty of women have visions of hitting the political powers aligned against them with a crippling suplex. “GLOW” acknowledges this while showing all the ways we persevere in spite of sexism and ignorance, creating the circumstances to capitalize on our strength and confidence nevertheless.

The lovely, necessary glory of this series is that although it trains some of its focus on female anger, frustration and shattering disappointment, that is not all there is to its outlook. “GLOW” is much more about the optimism, camaraderie and support these women lend one another inside and outside the ring.

The comedy explores what happens when women from very different backgrounds come together — a rich, white former soap opera star, a black woman who has had to work very hard to make life better for her son, a Latina dancer, an Indian medical school dropout pursuing her dreams and whatever Sheila the She Wolf (Gayle Rankin) is — and collaborate to create something that’s tough and dangerous and wonderful. The major arcs are wonderful to witness, but the tinier details — as when one character silently reaches for the hand of another, and the other grasps and squeezes it, briefly and lovingly — are what make this show.

You want feminist as hell? Here it is, and “GLOW” gets it done without overtly hanging a crass sign on its social compass. It is empowering. It’s also raucous fun.

Fortunately “GLOW” remains as lithe and fleet-footed in its second season as in its first, by the design of its executive producers Tara Herrmann, Jenji Kohan, Liz Flahive and Carly Mensch.

Flahive and Mensch return as its showrunners, maintaining the uncertain energetic chemistry between ex-best friends Ruth and Debbie, known to fans as their alter-egos Zoya the Destroya, a classic Soviet Cold War villain, and all-American Liberty Belle.

The violent dissolution of a close-knit friendship constituted as much of season 1’s backbone as the rise of the wrestling outfit did, while also providing the opportunity to touch upon issues both psychological and social. Ruth, made lonelier by the loss of her best friend (her fault, since she slept with Debbie’s husband), hangs to this dodgy job with everything she has. Debbie faces the truth that she gave away her power, and a series regular role on a successful soap opera, to play the part of a suburban housewife who exists to serve her husband, only to have that husband be unfaithful. In wrestling she comes to realize this; in wrestling she’s also able to reclaim a share of that power.

The new season allows the characters to more wholly deal with the ramifications of embodying stereotypes to entertain fans, particularly Tammé Dawson, aka Welfare Queen (Kia Stevens), who is forced to reconcile with her damaging character in a very real way early on.

Struggles for dominance in the ring are all planned -- part of the entertainment. But “GLOW” slices into the meat of what it means to have leverage in the workplace and what the men who have the ability to get this little performance company that could to the next level — namely Sam and his producer Sebastian "Bash" Howard (Chris Lowell) — owe the women, otherwise known as the product, who are putting their bodies on the line.

As tempting and simple as it may have been to make Sam a crusty jerk the ladies are forced to scheme against, “GLOW” gets great mileage out of treating its principal male characters with empathy and softness. Mind you, Sam is a jerk to both Ruth and Debbie, mainly out of a sense of insecurity. Much of season 2’s tension is a result of the dawning realization on the leathery Sam’s part that directors have far less control in TV than they do in movies.

Maron’s Sam also struggles with what it means to be a father now that his teen punk wrestler Justine (Britt Baron) has unmasked herself to reveal her true identity, making him at once gruffer and eventually more understanding. This development invites Annabella Sciorra into the mix, and she turns in a suitably prickly special guest performance as Justine’s worried, angry mother.

Even in this puddle the writers find some uplift, mainly through the delicate friendship between Sam and Ruth. At his pettiest, Sam somehow remains lovable; at his least mature Bash still cares about the people surrounding him. It’s understood that Sam’s only reacting to the undeniable fact that Ruth is actually quite good at making the team look good. He’d prefer her to be an underdog that he can nurse because he’s an underdog who needs nursing, just as Debbie wants Ruth to pay for her estranged husband’s sins since he’s not around for her to put in a headlock.

In “GLOW,” nobody is always the “face,” and nobody is entirely the “heel,” and this is what continues to make the story work. Costumes, wigs, greasepaint and glitter aside, these are just a bunch of humans, merrily if hamfistedly bumbling through this chapter of their lives, going all in on a dream that probably shouldn’t work but, in a small and effective way, actually appears to be catching on. Even Cherry Bang (Sydelle Noel) comes to recognize the value of being an important part of a scrappy enterprise as opposed to being dismissed at what should be a cushy high-profile opportunity.

This second season makes Brie and Maron’s onscreen partnership as charming and honest as the one Brie shares with Gilpin, the first season’s emotional heavy hitter. Some of the best scenes in these new episodes show Debbie falling apart in magnificent style, white wine in hand, and Gilpin once again makes her character's misery as funny as it is palpable.

Carmen, however, provides the heart and technical expertise the women of GLOW require, in addition to balancing her family loyalties. In achieving this balance, Young has more emotional notes to capitalize upon than before. Seeing her and everyone else in this series go all in, heart forward, makes their various tales of this ragtag dream worthy of our emotional investment and “GLOW” itself well worth of the five-plus hours of attention it asks of the audience. You’ll want to binge these episodes because they’re exactly what we all need right now.

Jeanne "Hollywood" Basone gave up drawing blood to kick ass, and she never looked back.