Author Alexia Norton Jones accuses Russell Simmons of rape: "I must have said no seven to 10 times" 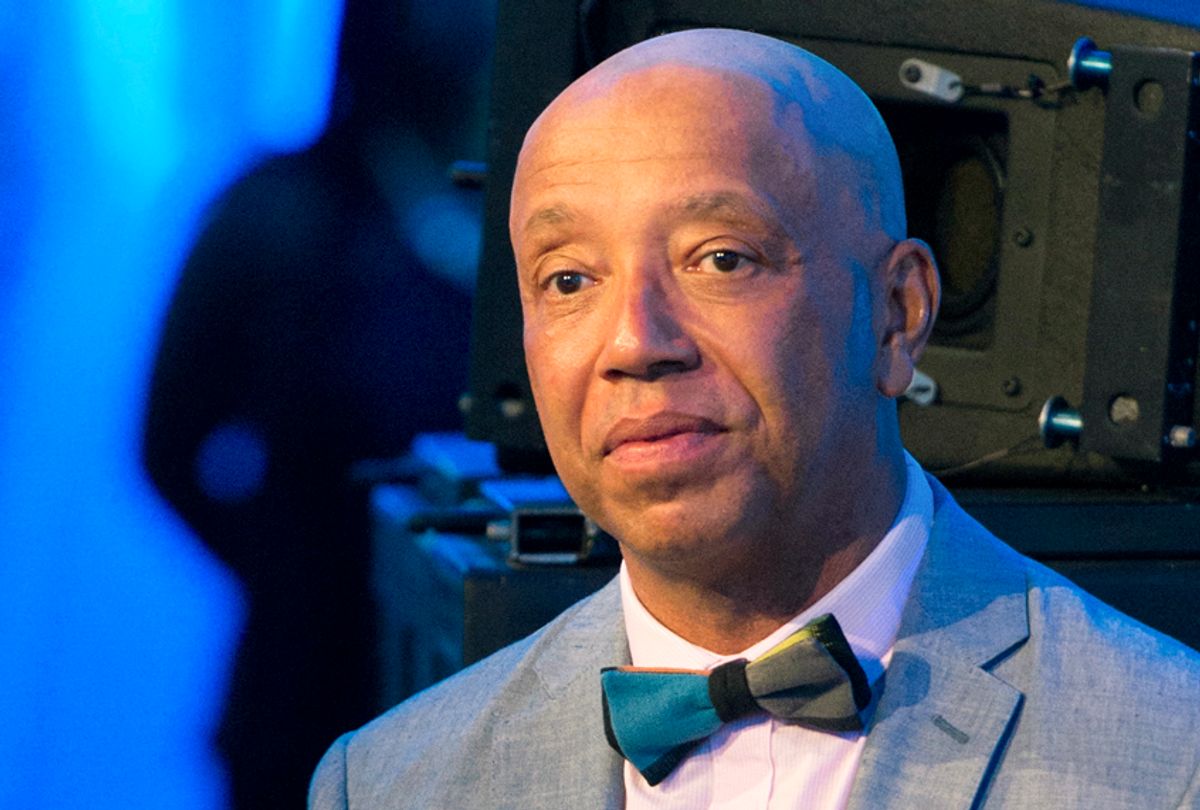 One more woman has come forward to accuse music mogul Russell Simmons of sexual misconduct, joining a list of alleged victims that has grown to more than a dozen.

Alexia Norton Jones, the author and grandchild of famed publisher W.W. Norton, revealed she went on a date with Simmons in 1990 – a night that allegedly ended with her pinned to a wall and raped by the Def Jam co-founder.

"It was such a fast attack. He pulled my dress up. I must have said no seven to 10 times," Jones claimed to Variety in an exclusive interview. "And then I acquiesced. It was very fast. I would say it happened in less than 10 minutes.

Since November of 2017, Simmons has been dogged by mounting claims of sexual harassment and rape in incidents that allegedly span from the early 1980s to 2016. Simmons departed from his business ventures that month after Jenny Lumet, the screenwriter of "Rachel Getting Married and daughter of the Academy Award-nominated director Sidney Lumet, detailed allegations of sexual assault in a guest column she penned in the Hollywood Reporter.

Nearly 30 years after the alleged rape, Jones said she was motivated to come forward as Simmons continues to deny any wrongdoing. According to Variety, Jones filed a police report with the NYPD last spring, even though it missed the window for felony charges to be brought forward in New York. Jones claimed she "doesn't want any money" from Simmons, but merely to stand in solidarity with his other accusers. She elaborated:

I would have kept quiet forever. What made me come forward is his denials of violence toward other women. I don’t want any money from Russell. I’m not suing him. If you look at the women he allegedly assaulted, many of us have a similar look. It’s uncanny. Russell knew that the African-American community was behind him. There are so few black men who make it, we wanted him to succeed. Yet there was also this huge betrayal. He counted on this silence.

Simmons denied Jones' allegations, telling Variety he was "deeply saddened" by her claims:

I’m deeply saddened by this story from Alexia. At no time did she share these feelings about her first sexual encounter with me, which took place roughly 28 years ago. I have taken multiple lie detector tests that affirm I never sexually assaulted anyone. Alexia and I dated, were intimate and attended multiple events together after she alleges the incident occurred in 1990. I considered her a friend for all these years and continue to have a warm relationship with members of her family. I believe we last spoke in 2006 when she called to express her disappointment over the fact that I had not attended an event honoring her father.

A representative for Simmons also shared a statement from Kenneth L. Jennings, a driver who first began working for the music mogul in 1989, with Variety:

"I recall driving Mr. Simmons and Alexia Jones on about 10 to 12 dates in or about 1990. Their relationship lasted approximately five months."

Jones has a very different recollection of her alleged relationship with Simmons. Jones told Variety she never went on another date with Simmons after she allegedly left his apartment "distraught and in shock." However, Jones claims the music mogul continued his pursuit.

"When I saw him out after that, I wouldn’t even look him in the eyes," she elaborated. "I thought he was garbage. But he still had the compunction to call me."

Jones said she first met Simmons in the mid-'80s, when she worked as an executive assistant at Inter City Broadcasting Corporation in the early days of his career as an ambitious record executive, years before their first date.

"There was no confusion about that. And I liked him," she said. "At the end of the evening, he wanted to show me his new apartment, which he said he’d bought from a well-known pop star."

Jones claimed that, within minutes, Simmons became physical, alleging he began by touching her body and kissing her.

"I didn’t want to go further. It was such a fast attack," she continued. "It was literally an attack. Because he was overweight, I remember thinking it was like being attacked by a flabby walrus."

Jones said she became "very depressed" after the alleged rape, which "eroded" her self-esteem. However, she claimed she learned to forgive Simmons with the passing of time:

I’m a victim, but I didn’t end up living like a victim. The other thing that you do is you have to forgive. I ended up forgiving Russell simply for one reason: time. I would run into him at social events decades later, and I saw a difference in him and the way he acted after he got clean. Russell doesn’t get to be my jailer.

How a story of rape, race and justice became revolutionary

Documentary director Nancy Buirski says she had a responsibility to direct her latest “The Rape of Recy Taylor," a disturbing look at the brutal rape of a young black woman by six white boys in Alabama in 1944.