After embarrassing Theresa May in interview with The Sun, Trump apologizes to her

The president claimed that parts of his interview with The Sun, a Rupert Murdoch-owned tabloid, were "fake news" 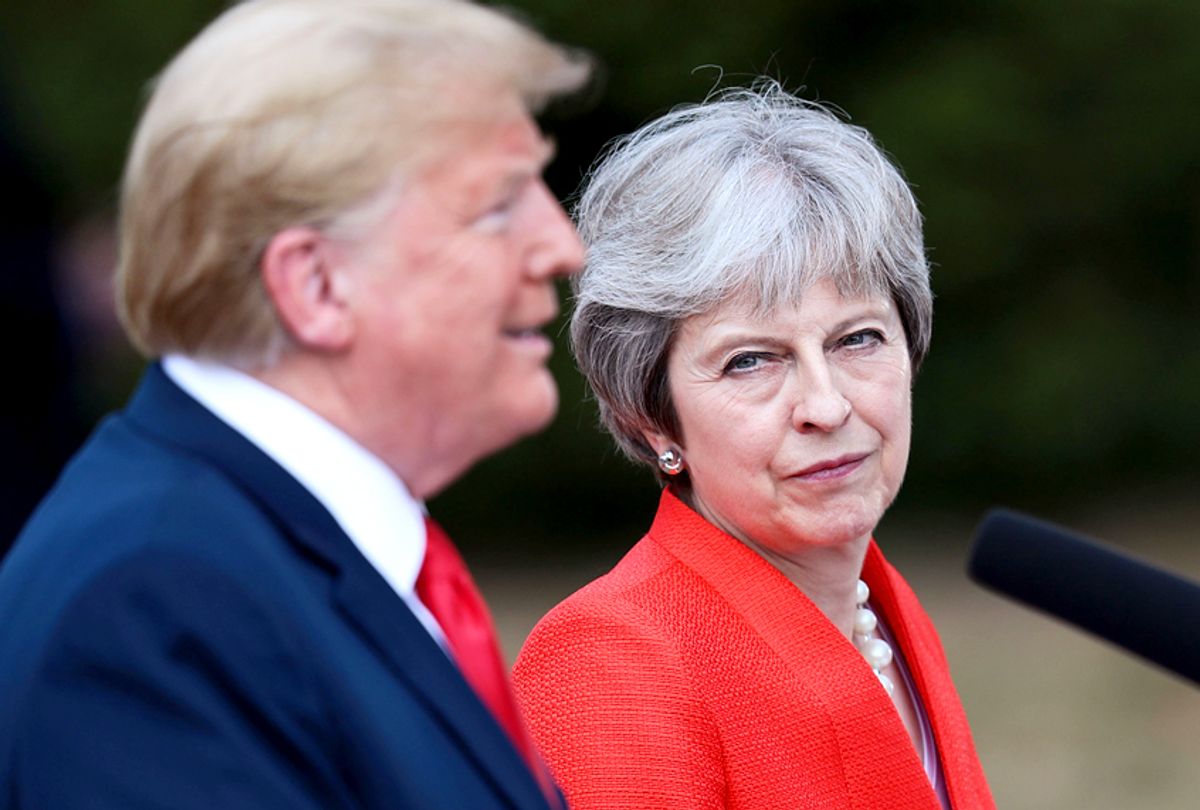 "I didn't criticize the prime minister," he insisted during a joint press conference with his British counterpart on Friday.

That statement was directly contradicted by the facts, however, even as the president at one point refused to answer a question from a CNN reporter on the grounds that it's "fake news."

Trump's extensive interview with The Sun also included swipes at London Mayor Sadiq Khan and Europe's comparatively liberal immigration policies — the latter in terms that can only accurately be described as racist.

On immigration, Trump implicitly made it clear that he felt the influx of non-whites into Europe was destroying the culture of that continent.

"I have great love for countries in Europe. Don’t forget, essentially I’m a product of the European Union, between Scotland and Germany. Right? My father Germany, my mother Scotland," Trump told the Sun. "I think what has happened to Europe is a shame. Allowing the immigration to take place in Europe is a shame. I think it changed the fabric of Europe and, unless you act very quickly, it’s never going to be what it was and I don’t mean that in a positive way."

He added, "So I think allowing millions and millions of people to come into Europe is very, very sad. I think you are losing your culture. Look around. You go through certain areas that didn’t exist ten or 15 years ago."

Trump reiterated these sentiments during his joint press conference with May on Friday, making it clear that he deplores the wave of immigration to Europe as eroding the culture of that continent.

When discussing May's preference for a so-called "soft Brexit" deal with the European Union that would maintain close ties with the multinational organization, Trump insisted that she had ignored his own advice.

As Trump put it, May's position on the European Union and trade "will definitely affect trade with the United States, unfortunately in a negative way."

READ MORE: When evangelicals were pro-choice and the NRA was pro-gun control: A history of hypocrisy

Trump also agreed with the position of former May cabinet member Boris Johnson, who resigned earlier this week, when he said that Trump would have gone in "bloody hard" in the Brexit negotiations.

"I would have done it much differently. I actually told Theresa May how to do it but she didn’t agree, she didn’t listen to me. She wanted to go a different route," Trump told the Sun. "I would actually say that she probably went the opposite way. And that is fine. She should negotiate the best way she knows how. But it is too bad what is going on."

Trump also threw another bouquet toward Johnson, this time by stating that he thought the departing politician would make a fine Prime Minister.

"I have a lot of respect for Boris. He obviously likes me, and says very good things about me," Trump told the Sun. "I was very saddened to see he was leaving government and I hope he goes back in at some point. I think he is a great representative for your country."

When asked if he thought Johnson should be the next prime minister, Trump said "Well I am not pitting one against the other. I am just saying I think he would be a great Prime Minister. I think he’s got what it takes."

The politician who received the harshest words from Trump was Sadiq Khan, the current mayor of London as well as the first Muslim to lead the city.

He added, "I think he has done a bad job on crime, if you look, all of the horrible things going on there, with all of the crime that is being brought in."

Trump had canceled a previously planned trip to London last year after he got into a public dispute with Khan when Trump claimed that the mayor had insisted there was "no reason for alarm" after a terrorist attack in the summer of 2017, according to CNN. The quote had been taken out of context but Trump never apologized for his claim that Khan's statement reflected people "being politically correct."

Finally, Trump revealed that the anticipated 200,000 protesters who have rallied to object to Trump's visit to London, complete with a giant balloon depicting Trump as a big baby, have soured his view on the city.

"I guess when they put out blimps to make me feel unwelcome, no reason for me to go to London," Trump told the Sun. "I used to love London as a city. I haven’t been there in a long time. But when they make you feel unwelcome, why would I stay there?"

He added, "And when I say that I am talking about government because the people of the UK agree with me."

"You know, a poll just came out that I am the most popular person in the history of the Republican Party. Beating Lincoln. I beat our Honest Abe," Trump told The Sun. "But the people of the UK, and I’ll bet if you had an honest poll, I’d be very strong. They want the same thing I want. I love the UK."

A look at anti-Trump protesters who could face decades in prison.