Why won't some people believe what their own senses tell them? Political scientists explain 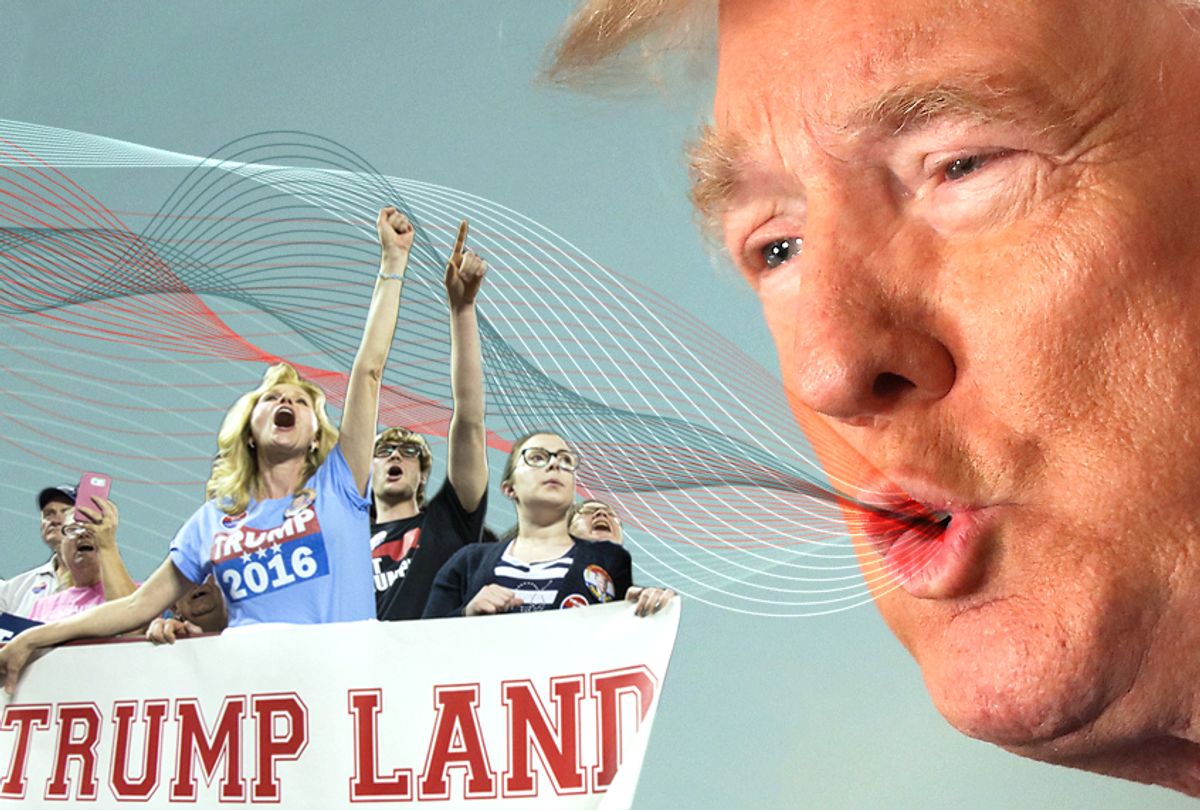 Like many, I watched Trump's behavior at the Helsinki summit with bulging eyes —a mix of shock and dismay that there were still those who, despite mounds of evidence, refuse to accept that President Trump is a senile, braying, compromised authoritarian. That led to a deeper question: How do so many Trump-supporting Republicans — 68 percent, according to one poll — refuse to acknowledge what their eyes and ears told them at the Helsinki summit?

While commentators from the left, right and middle love to bemoan how those who disagree with them ignore "facts" and "logic," the unwillingness to accept the input you witness yourself is a much deeper and more troubling problem. Methodologically sound statistics, well-documented reports, scientific research and historical information are objective and reliable and thus should be taken seriously, to be sure, but because they are still inherently intangible — matters to be processed by the mind rather than observed with the senses — people who dismiss them as abstractions are not willfully insane for doing so.

The same is not true when you can watch a video in which, before your very eyes and in plain English, the president sides with a hostile foreign leader over his own intelligence agencies, blatantly sucks up to that same despot on a number of occasions, and even offers to turn over anti-Putin critics to be persecuted as a trade-off for America pursuing legitimate criminal cases against Russians who wronged our country. If you see that and then insist that Trump didn't betray America to Russia — never mind whether you believe that betrayal technically constitutes treason, a point which is legitimately arguable — you are either (a) more loyal to Russia than America, a scenario that may apply to Trump himself but almost certainly does not apply to the vast majority of the people supporting him right now or (b) rendering yourself willfully insane in the literal definition of that word — that is, adopting a state of mind that prevents you from perceiving the reality that is right in front of you.

My goal, when I set out to do research for this article, was to figure out how people who had adopted that mindset could be approached in a way that would cause them to accept that water is wet, blood is red, sandpaper is scratchy and Trump betrayed America to Putin in Helsinki.

The results were not hopeful.

"My hunch is that the bigger phenomenon, the more important phenomenon, is that people always overestimate the amount of attention that anybody in the public is paying to any of this," Gabriel Lenz, an associate professor at the University of California at Berkeley's Department of Political Science, told Salon. "So they probably would figure it out if they paid attention but mostly they're just not and so they'll fall back on any cues, heuristics they normally use."

Lilliana Mason, an assistant professor in the Department of Government and Politics at the University of Maryland, brought up an additional factor.

"And the really disturbing part of that is that the people who have the most political information are the ones who are the best at deceiving themselves into making the world the way they want it to be," she added.

Neither of these explanations is necessarily surprising. It stands to reason that not everyone who supports Trump right now watched the Helsinki summit or understood the details of what was being discussed there, and certainly those who were sufficiently well-informed may have been motivated — if they're already pro-Trump — to not feel humiliated by realizing they had been supporting a fool and a puppet.

"I think that probably the best established mechanism here is some sort of motivated reasoning. They're motivated to counter-argue and think through, come up with reasons why they don't see this as disqualifying. And they can tell themselves some story about why Trump would have to say this or doesn't mean it," Lenz told Salon.

During my interview with Mason, she elaborated on just how people use motivated reasoning to put a positive spin on the objectively negative developments right in front of them.

"When I say information — generally we say knowledge — but I'm just calling it information at this point, because you can have bad information and still believe it," Mason explained. "And essentially the more of it that you have — which right now means the more you are exposed to media arguments that help you justify what you've seen — the easier it is for you to say, 'Well, I can explain it because "Fox & Friends" this morning just showed me how to explain it.' Or, 'because I'm reading Breitbart and that told me what exactly is happening here and it told me how to get my brain around it in a way that makes it okay.'"

Neither Lenz nor Mason provided hopeful assessments about how to break through to people who refuse to believe their eyes and ears.

"Most of what we know about misinformation is that the best way to get people to correct these things they're seeing in front of them that are incorrect things is to have an unlikely person correct it. So a Republican should criticize Trump's behavior, and we actually are seeing some of that, and so actually I think the best way is to highlight the fact that traditionally loyal, partisan Republicans are seeing this as a betrayal. That's one way to do it," Mason suggested. "The only other thing I could think of is to try to bring in the superordinate American identity."

Of course, as Mason pointed out, the fact that many of Trump's supporters seem to be more loyal to him than to the Republican Party makes the first development less effective than might otherwise be the case; something similar happened when Richard Nixon was facing impeachment during the Watergate scandal. As for the second development, Mason noted that Trump supporters can frequently redefine what it means to be patriotic so as to make loyalty to Trump the man somehow the definition of patriotism regardless of whether he betrays America's interests.

Lenz also had a suggestion on how to counter the people who refuse to recognize what is right in front of them: Keep on covering it.

"The longer they're in the news, the more likely it is someone's going to hear about them, someone's going to learn about them," Lenz told Salon, citing the frequent coverage of Hurricane Katrina during President George W. Bush's administration as one example of something similar occurring.

While Lenz is undeniably correct that continuing to cover the Helsinki summit for the next few months or years will keep it fresh in the minds of Americans who don't pay enough attention to politics, it may do nothing for those who are already aware of it but inclined to remain loyal to Trump. Indeed, just think of how little effect the Mueller investigation has had on them.

This brings me to an observation made by late-night talk show host Stephen Colbert earlier this week:

They say that time heals all wounds... and they are wrong. Time can also fester all wounds and then you gotta start lopping off stuff before it spreads. And I'm beginning to think it's time to reach for the bone saw because anyone who still believes Donald Trump at this point is gangrene on the body politic.

Unfortunately it really is that simple. America now faces the unenviable reality of having a president who is, for whatever reason, beholden to the leader of a hostile foreign power. The priority must be to hold him accountable and remove him from office. If the Americans who support his political party agree that this is a priority, more power to them. If they refuse to do so, however, that doesn't suddenly mean removing Trump from power is no longer an imperative. It simply means that these people have, by virtue of refusing to admit that their eyes and ears aren't lying to them, rendered themselves at best irrelevant to any intelligent conversation and, at worst, a downright impediment to having one.

As Edmund Burke, one of the founders of modern conservative thought, famously put it:

Your representative owes you, not his industry only, but his judgment; and he betrays, instead of serving you, if he sacrifices it to your opinion.