We don't need a prestige Joker movie, but "The Dark Knight" made one inevitable 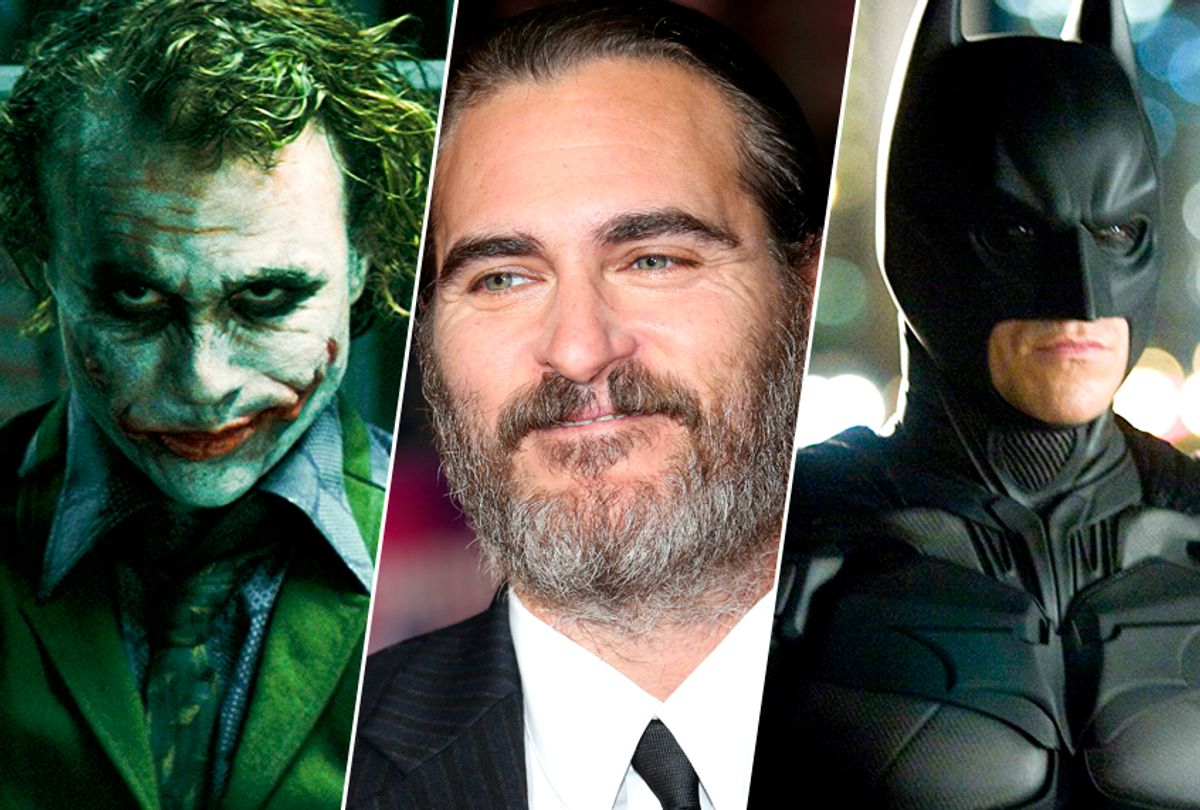 Early in Dave Gibbons and Alan Moore’s seminal comic book series “Watchmen,” the malodorous, psychotic sleuth Rorschach cracks a joke. It goes something like this: Feeling depressed and utterly despondent, a man visits his doctor, who offers a simple treatment. “Great clown Pagliacci is in town tonight,” the doctor offers. “Go and see him. That should pick you up.” The patient bursts into tears, blubbering, “But doctor! I am Pagliacci!”

It’s a good joke. And rings true. If the jokers — those whose cultural function is the lightening of life’s heavy loads — are deeply melancholy, then who will (to nip the inspiration of Gibbons/Moore’s comic) clown the clowns? More crucially, the joke invites us to consider the extent to which Pagliacci's depression is a consequence of, and not merely an ironic counterpoint to, his desire to keep the whole world laughing. It is not just that he laughs at the world, but that he possesses a unique ability to see through it; a preternatural knack for understanding its hypocrisies and rank deceits. It’s a modest insight. And one that, I fear, has been debased into a cultural cliché.

If there's one text responsible for certifying the role of the clown as cultural commentator, interpreting the world through a cockeyed gaze, it’s likely Christopher Nolan’s superhero cinema game-changer “The Dark Knight,” which marks its tenth anniversary this summer. In that film, Heath Ledger played The Joker, Batman’s arch-nemesis and “Clown Prince of Crime,” as a convincingly unhinged agent of chaos — a criminal-mastermind-as-Nietzschean-archetype, cutting through the herd morality of Gotham’s huddled masses to establish his own disorderly value system. It was a genuinely iconic performance in an utterly watchable, wholly entertaining film. (Truthfully: While my feelings toward superhero cinema rarely rise above open contempt, if compelled to choose I’d take Nolan’s wide-screen action set-pieces over any of the Marvel movies’ crowded CGI bang-’em-ups, pretty much any day of the week.)

But Ledger’s performance, and “The Dark Knight” itself, also offered a dark and unfunny portent of mass culture’s unfolding over the subsequent decade and beyond.

The idea of a movie about a sinister clown directed by the guy who did “Road Trip,” with the star of a recent Thomas Pynchon adaptation, overseen by one of American cinema’s most formidable talents, may seem like a fittingly Joker-ish concoction of meaninglessness. But it’s really little more than carefully deliberated studio algebra, meant to capitalize on the post-“Dark Knight” legacy of superhero cinema’s most serious jester. After all, if Ledger’s performance was severe enough to both win him and Oscar and spur rumors that it led to his untimely death at age 28 — those rumors were dispelled in the doc “I Am Heath Ledger,” and elsewhere — then surely casting a generational thespian talent like Phoenix speaks to the character’s worthiness. (Such inflated appraisals of The Joker’s apparent appeal to actors always bring to mind this tweet.)

In advance of Comic-Con, and even well in advance of the film entering production, the new Joker movie is already being hailed in some quarters as a kind of coup for DC and Warner Bros., whose own mega-budgeted superhero efforts have failed to capture viewers’ imaginations and pocketbooks on the same order as the ever-expanding Marvel Cinematic Universe. As the entertainment website Collider recently put it, “when rumors hit earlier this year that Joaquin Phoenix was in talks to play a version of the Joker for director Todd Phillips in a standalone DC movie, it was one of those rare moments where everyone came together and said, ‘Yes!'”

At the risk of playing the contrarian sniping back at this supposed collective “Yes!” with a weary, “Ugh . . . no!,” I can’t help but feel skeptical. Sure, the forthcoming Joaquin Phoenix Joker movie is a triumph for DC/Warners/the recirculated belief that superhero movies possess anything like artistic merit/the pocket economy that generates Joker merchandise hawked at Spencer’s. But it’s no doubt a defeat for cinema itself.

It’s not enough that superhero movies now dominate in the big-budget blockbuster space. The domain of R-rated dramas was once safe from superhero incursions. But now, the profitable escapades of the foul-mouthed “Deadpool” movies and the hyper-violent, revisionist-mutant-Western “Logan” have dragged capped, clawed, armed-to-the-teeth crusaders into the realm of real movies. Superhero movies are now so ubiquitous that even serious, psychologically complicated adult dramas must be draped in the genre’s capes, cowls and periwinkle polka-dot trench coats.

The film has drawn rather obvious comparisons to Scorsese’s “Taxi Driver.” At this I can’t help but wonder: Who the hell watches “Taxi Driver” and thinks, “Good movie. But it’d be truly great if the guy was dressed like a clown”? Or more pointedly: Why tell a story of any unknown schmo’s descent into madness and criminality when you can bank, both literally and figuratively, on an audience’s familiarity with an established character?

I also cannot help but wince at the very idea of The Joker as a somehow relevant cultural archetype. Even the most generous allegorical takes on the Nolan-era Joker feel horribly old hat. The post-9/11 plunge into a world of deadly, seemingly indiscriminate terrorist attacks and comparably deadly, just-as-indiscriminate responses, may produce a fictional supervillain whose fundamental aim is the dismantling of systems of control and coercion who, as Michael Caine’s wizened butler puts it in Nolan’s film, “just want[s] to watch the world burn.”

Yet this characterization dangerously oversimplifies the actual motivations animating political reality. (It is also, I hasten to mention, wholly unfair to more serious-minded anarchists, merely inflating unflattering notions of those who wish to live free from government coercion as, in the words of Stephen Jay Gould, “bearded bomb throwers furtively stalking about city streets at night.”) Just look at the way the iconography of The Joker has been adapted to mock world leaders, from Barack Obama to Angela Merkel and, naturally, Donald Trump. Such mockery offers nothing like genuine insight. Instead, it reduces the complex and very deliberate political maneuvering of one or another perceived into the base motivations of a recognizable Bad Guy. If The Joker is somehow valuable as a cultural index of political reality, it is only in the character’s function as a meme: a symbol that can be endlessly retooled according to whim and convenience. In this sense, he has all the psychological depth of your average Minion.

Even the high-profile casting of an actor as uniquely talented as Phoenix feels like a loss. For years, Phoenix was a holdout. Where other respectable talents — Benedict Cumberbatch, Mark Ruffalo, Josh Brolin, Scarlett Johansson, Kevin Costner — were rolled into the Marvel/DC superhero movie katamari, Phoenix rebuffed such coy advances. His capitulation is made even more depressing by his justification. As he told Little White Lies earlier this year, “I enjoy those movies sometimes, and I think they keep the f**king industry going in some ways.” It’s less about quality and more about necessity (and, of course, money). These movies have come to stand as the bedrock of Hollywood film production. Even more than the bedrock. It’s not enough that we have to have this movies. Now we’re being told that we need them, lest the infrastructure of filmmaking collapse like some cruddily built house of cards.

The current DC/Warner Bros. superhero slate advances such an argument. The as-yet-untitled Joaquin Phoenix Joker movie is one of two solo Joker movies currently in some stage of pre-production. The other sees Jared Leto, who played the character in 2016’s “Suicide Squad,” reprising his role as a be-grilled, vaguely pimp-ish take on the character. Multiple Joker movies with various Jokers played by different actors may prove befuddling for viewers accustomed to the shared universe logic of the Marvel films, and DC’s own “Justice League” crossover brand. But that’s all a part of the studio’s new approach to their trademarked heroes and villains.

As Deadline put it when the project was announced, “This will be the first film under a new banner that has yet to be named in which WB can expand the canon of DC properties and create unique storylines with different actors playing the iconic characters.” Essentially, the idea is to work out which stories work in front of audiences.

It’s an audacious and insulting bid. Imagine a band figuring how to play a song live in front of a paying audience. Think of an author littering a polished manuscript with notes and marginalia enumerating paths not taken. Studios are now so contemptuous of audiences that they’re betting on their interest in paying to see successful storytelling formulas workshopped in front of them.

And the truly despairing thing is: they’re probably right.

An interview with the "Deadpool 2" Director

Salon Talks to David Leitch about the sequel