Do pre-sales for "The Briefing," the new memoir from Sean Spicer, point to low enthusiasm? 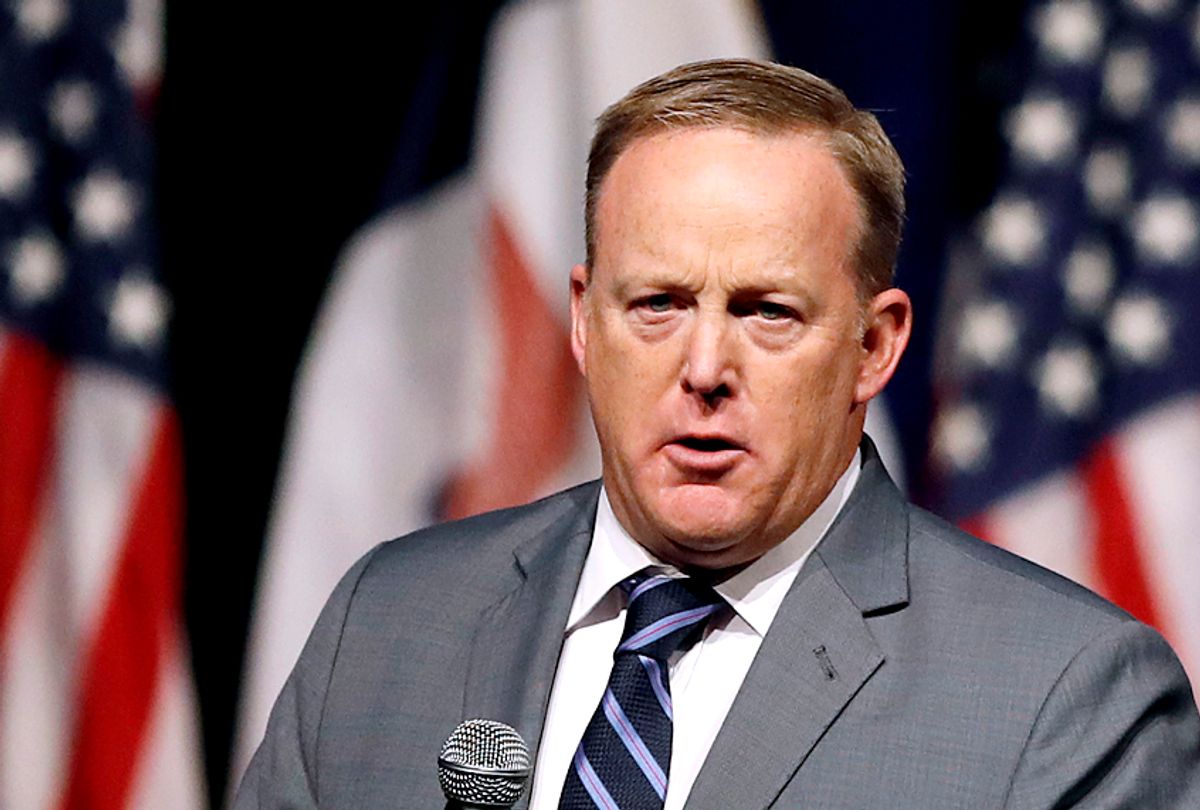 As of Monday evening, "The Briefing" had failed to crack the top 400 books on the "Amazon Best Seller" chart. (The Wrap reported earlier that morning that pre-orders on Amazon were "tanking." At the time, Spicer's book ranked slightly above the top 1,000 titles.)

Spicer's ranking stands in stark contrast to Fox News legal analyst Gregg Jarrett, whose book "The Russia Hoax: The Illicit Scheme to Clear Hillary Clinton and Frame Donald Trump" also goes on sale Tuesday yet currently ranks in the No. 5 spot on the same list at the time as of this writing.

Fox News' Jeanine Pirro, a personal friend of President Donald Trump, sits at the top perch on the chart after her new title "Liars, Leakers, and Liberals: The Case Against the Anti-Trump Conspiracy" published last week.

Despite Spicer's extensive promotional tour – he was on the "Today Show" twice last week, and he had three book launch parties scheduled – his pre-sale numbers could be a predictor of low enthusiasm for his work.

CNN's Brian Stelter has a theory for why the title isn't a best-seller before it officially hits book stores.

"I think there’s a simple explanation for this: Spicer, despite all his TV hits hyping the book, is not Trumpy 'enough.' He only served as press secretary for six months," Stelter wrote in his morning newsletter. "Pirro and Jarrett, on the other hand, are absolute Trump diehards. And, they’re plugged in right to the base via Fox’s prime time shows."

However, the president did tweet an endorsement for "The Briefing" on June 30, and he even encouraged his supporters to purchase a copy.

"A friend of mine and a man who has truly seen politics and life as few others ever will, Sean Spicer, has written a great new book, 'The Briefing: Politics, the Press and the President.'  It is a story told with both heart and knowledge," Trump wrote. "Really good, go get it!"

Spicer has tip-toed around the controversies of the press briefing room ever since he departed the White House. He has sought to poke fun at some of the falsehoods he told from behind the West Wing podium without claiming ownership of them. For example, in a surprise appearance at the Emmys last year, Spicer mocked the lie he told about the size of the crowd at Trump's inauguration. At the same time, however, the former press secretary has refused to distance himself too far from Trump, leaving him to straddle a middle ground which both Trump supporters and dissenters could deem not genuine.

The New York Times describes Spicer as "a kind of anti-celebrity." The outlet's Elizabeth Williamson elaborates on the reputation he cultivated while working for the most powerful man in the world:

His echoing of presidential untruths, his addressing the firing of the FBI Director James B. Comey from the nighttime shadows of a White House hedgerow, his referring to Nazi death camps as 'Holocaust Centers,' made the afternoon White House briefing a can’t-look-away television spectacle that topped the soap opera 'General Hospital' for viewership. The actress Melissa McCarthy created a gum-chewing parody of Mr. Spicer on 'Saturday Night Live.'

According to interviews Spicer has done in the lead up to the book's release, the former press secretary claims that he addresses these infamous scandals at length, offering context and explanation.

Aside from penning his memoir, in which he describes the president as "a unicorn, riding a unicorn over a rainbow," the former press secretary has also secured an unpaid pundit position with Fox News and recorded several podcast episodes with the conservative writer Katie Pavlich.

Additionally, Spicer has been pitching a TV talk show tentatively titled "Sean Spicer's Common Ground." According to a pitch sheet obtained by The New York Times, it would feature Spicer hosting "some of the most interesting and thoughtful public figures for a drink and some lite conversation at a local pub or cafe." Stormy Daniels' lawyer Michael Avenatti said he was approached as a guest, as did comedian Kathy Griffin; both said they declined the offer.