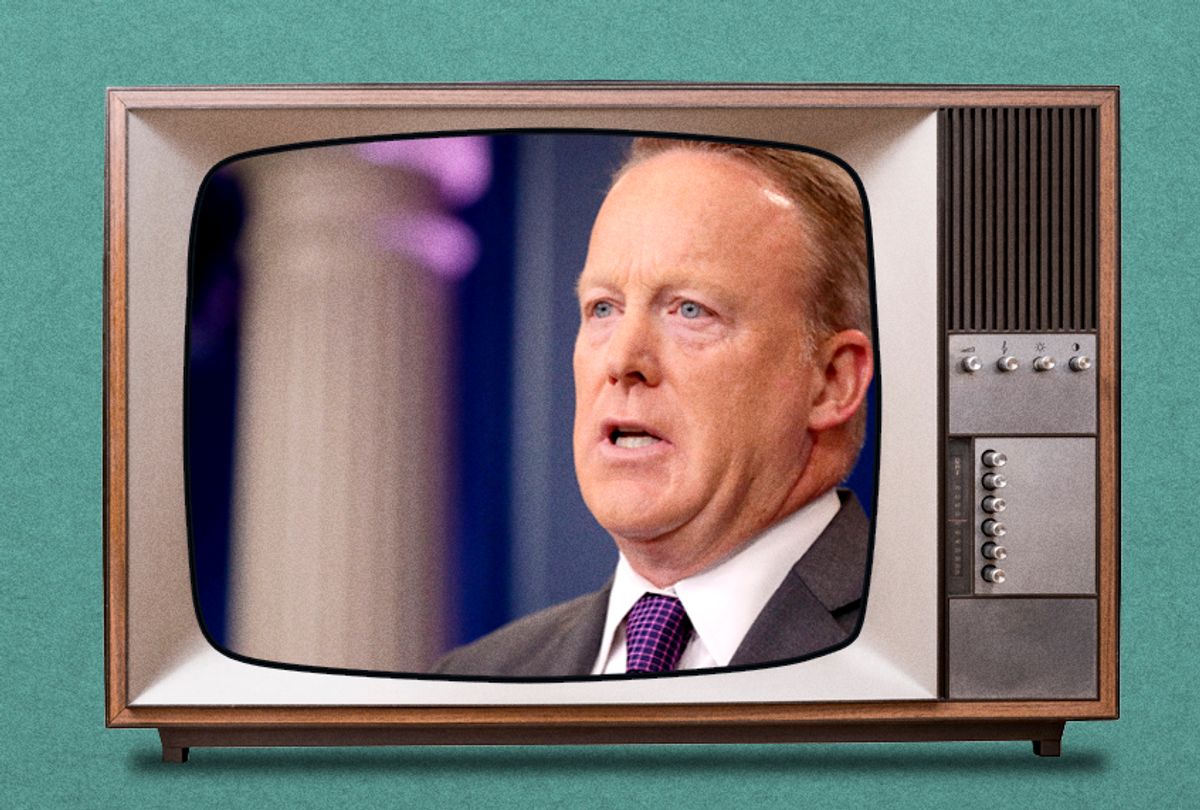 Sean Spicer, the former White House press secretary mocked by comedians for his combative style at the podium and for dealing in untruths — most notably insisting that Donald Trump's inauguration crowd "was the largest audience to ever witness an inauguration, period" — in the face of opposing facts, is vying to be the next Oprah.

According to the Times, which obtained a copy, the show's pitch sheet details Spicer hosting "some of the most interesting and thoughtful public figures for a drink and some lite conversation at a local pub or cafe."

"The relaxed atmosphere is an ideal setting for Sean to get to know his guests as they discuss everything from the media to marriage. . . They might even tangle over the merits of making your bed or the value of a great point guard."

The former Trump spokesperson confirmed to the Times that he was working on a TV show. "In this current environment, I think it’s important to have a platform where we can have civil, respectful, and informative discussions on the issues of the day," he said.

No network is on board yet, but there are plans to film the pilot episode next month. Spicer has already enlisted some industry titans, including Debmar-Mercury, the syndicator behind "The Wendy Williams Show" and "Family Feud," to co-produce with Pilgrim Media Group ("American Chopper").

On "Sean Spicer’s Common Ground," he would interview one guest per episode, the Times reported, and already two guests have reportedly turned Spicer down.

In an impressive mock-up of Trump's Twitter lingo, Michael Avenatti, the lawyer suing Trump on behalf of Stormy Daniels, said that he had been approached by Spicer to appear on the show.

He tweeted: "I turned down Sean Spicer for his new show despite the fact that it would have been YUGE with the biggest ratings since the Apprentice and the largest live audience since the 2017 Inauguration (which was the largest ever on record)!!!!!!!!!"

Avenatti also told the Times, "It is pretty funny that while some on the right criticize me for being on television too much, others are soliciting me to appear with them to help sell their shows."

Comedian Kathy Griffin, who came under fire for posing for a photo with a fake bloody mannequin head that resembled Trump and is currently making her comeback on a comedy tour, conspicuously did not deny a source's claim that she also declined to appear on the show.

Times White House correspondent Maggie Haberman tweeted that a "source says @kathygriffin was also invited but she declined," and while Griffin didn't comment, she did retweet Haberman's tweet.

Since leaving the White House, Spicer has worked to stay in the public eye. He is represented by the Hollywood agency WME and started a podcast with conservative writer Katie Pavlich called "Everything's Going to Be All Right." He also joined the super PAC America First Action to continue to support Trump.

Spicer's book about his short time at the White House, "The Briefing: Politics, The Press, and The President," will be out out on July 24. Not only will Spicer embark on an extensive book tour, but a documentary film crew will come along to film his travels, the Times said.

But the former press secretary has not had much of a presence on TV. A show of his own would change that and mark a return for Spicer, who made a name for himself anchoring testy White House news briefings and through Melissa McCarthy's "Saturday Night Live" parody, which won the comedian an Emmy Award for best guest actress on a comedy series for her portrayal of Spicer's penchant for bending the truth in the president's favor and hostility towards reporters who called him out for it.

The Times pressed Spicer about creating a show to promote civility from a person who served, for at least a short time, as the mouthpiece for a deeply divisive administration. "Maybe if I can be part of having productive conversations with people, we can show a better way," he replied, adding that he could have answered questions from reporters "in a more effective way."

The reported rejected invitations by potential left-leaning guests for the show recalls reactions to Spicer when he made a surprise appearance at the 69th Emmy Awards in 2017, mocking his notorious lie about the inauguration. He rolled out onto the stage behind a podium and proclaimed: "This will be the largest audience to witness an Emmys, period. Both in person and around the world."

Many in the live audience laughed at the obvious nod to his time as press secretary, but for many, there was nothing funny about a former spokesperson for the president poking fun at the times he lied to the American people. As reactions to that moment demonstrate, Spicer's new emphasis on civility, if his show is picked up, could struggle to find a receptive audience.

The "best-of" responses from Spicer as White House press secretary.