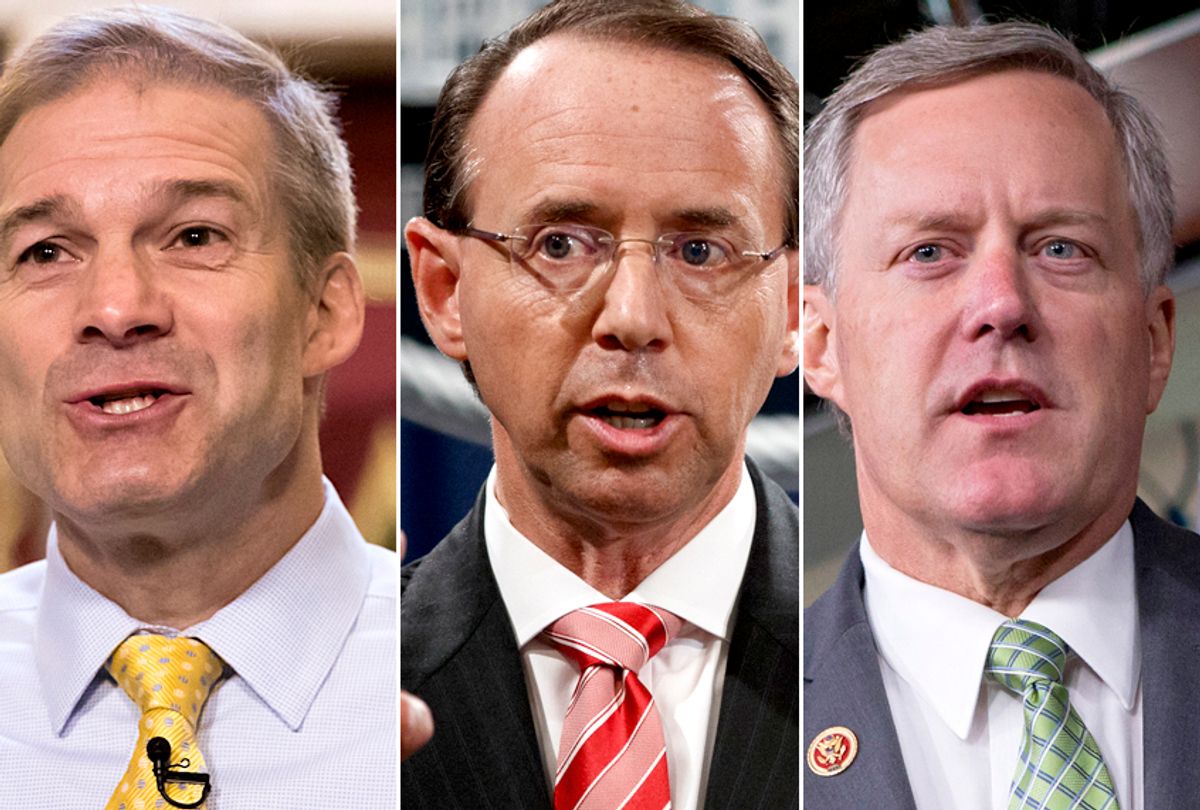 Many Republicans aren't on board with a failed, last-ditch attempt by some of President Donald Trump's closest congressional allies to impeach Deputy Attorney General Rod Rosenstein.

"It is the most shortsighted, and I have to say stupid thing, I have heard in a long time," Harvard law professor Alan Dershowitz said on Fox News on Thursday. "Here you have a president who the Democrats are trying to impeach. If they gain the House of Representatives they will almost certainly do so. And the big issue will be, can you impeach a president or anyone else when you don't charge them with specific crimes, just because you disagree with what he's done? And now you have the Republicans making the case for the Democrats who want to impeach the president! By offering bills of impeachment against Rod Rosenstein that don't charge crimes!"

He added, "This is so shortsighted! Both sides do this: They use criminal law to go after their enemies, they use impeachment to go after their enemies. The big victim is the American public. Impeachment is supposed to be there for serious crimes: Treason, bribery, other high crimes and misdemeanors. If you don't like the way Rod Rosenstein is responding to your subpoena, charge him with contempt of court. Bring him to court. But do not use impeachment. That just helps the Democrats who are trying to impeach President Trump. It is a dumb, dumb decision."

Dershowitz, it is worth noting, has been at the forefront of law professors defending President Donald Trump on various occasions regarding the legal accusations being made against him. He did so as recently as Tuesday night during an appearance on Fox News about the leaked taped conversation between the president and his former lawyer, Michael Cohen.

"There’s no crime," Dershowitz told "Fox & Friends." "This was a conversation between a lawyer and a client that should never have been heard. Even if . . . even if, and the tape is unclear, Trump raised the word cash, there was then a discussion. And the lawyer said 'No, no, no.' And President Trump said 'No, we’ll do it by check.' Lawyers and clients have those conversations all the time. I’ve had conversations like that with clients. The end result is, cash was not used, no payments were made."

Dershowitz added, "The context of the tape all suggests that the president wanted it to be papered. That he wanted it to be corporation, not just a payment. He wanted to make sure it was done right. He wanted to make sure it was done with records. And so I think the big picture is no crime. It sounds like Cohen is not as loyal to the president as he once was. It also suggests that this conversation never should have been heard by any of us."

"I have to start by saying that the people behind this are long-time friends of mine, whom I respect and admire and like," Napolitano started by saying, adding at the prompting of one of the co-hosts that they were like-minded. Nevertheless, Napolitano argued that "on this I profoundly disagree with them. And it doesn't matter what I think. The Constitution says there is a very, very narrow basis for impeachment. And that's intentional. If it was a broad basis, people would be getting kicked out of office left and right."

He added, "When Bill Clinton was impeached, it was obstructing justice by lying under oath. So it has to be something of that magnitude. Improperly signing off on a FISA warrant, staying in a position of a conflict of interest where you could be a witness in a case and you're managing the case. Those are good arguments for ethical violations, not for impeachment."

Not surprisingly, Speaker of the House Paul Ryan has already come out against impeaching Rosenstein, and Attorney General Jeff Sessions has publicly stated that he has "the highest confidence" in his deputy.

"Impeach him for what?" Gowdy asked on CBS's "Face the Nation."

Just as Trump has turned against Attorney General Jeff Sessions for recusing himself from the Trump-Russia investigation, so too has he been seeking an excuse to fire Rosenstein for quite some time. The president demanded loyalty from Rosenstein early in his administration and has been outraged that Rosenstein hasn't done more to quash the ongoing investigation into alleged connections between his campaign and Russia that have been pursued by Special Counsel Robert Mueller.

Of course, doing his job isn't sufficient grounds (or any grounds for that matter) to impeach a federal official. That is why Republican congressmen began drawing up articles of impeachment against Rosenstein all the way back in April, a process that has reached its next step now, as The New York Times reported:

A group of House Republicans escalated their feud with the deputy attorney general, Rod J. Rosenstein, on Wednesday, introducing articles of impeachment in a long-shot bid to oust the official overseeing the special counsel inquiry into Russian election interference.

The move was seen as much as a political maneuver as an act of congressional oversight. The group of 11, led by Representatives Mark Meadows of North Carolina and Jim Jordan of Ohio, would need the support of a majority of the House and two-thirds of the Senate to convict Mr. Rosenstein. The resolution they filed does not require the entire House to vote before Congress adjourns for its summer recess on Friday.

The claim being made by leaders of the impeachment move, including members of the ultraconservative House Freedom Caucus like Reps. Mark Meadows of North Carolina and Jim Jordan of Ohio, is that Rosenstein has not moved with sufficient speed to provide them with documents that they've requested about his various investigations. In a statement on Wednesday, Meadows declared that "it’s time to find a new deputy attorney general who is serious about accountability and transparency."

Rep. Andy Biggs, R-Ariz., echoed these thoughts in his own statement, arguing that "at almost every opportunity, Mr. Rosenstein has resisted and defied Congress’s constitutional oversight. His time to obstruct our investigations has expired."

The resolution specifically objected to Rosenstein signing off on a request to continue a Foreign Intelligence Surveillance Court application to wiretap Carter Page, one of Trump's former campaign advisers.

It is also notable that one of the Republican congressmen behind the impeachment case against Rosenstein, Rep. Jim Jordan of Ohio, is under fire himself for being allegedly aware of sexual abuse occurring at Ohio State University while he was an assistant coach there and doing nothing about it. Despite these accusations, there is no indication that Jordan's congressional office — or, for that matter, the level of authority necessary to suggest impeaching a federal official and be taken seriously — is in any way in jeopardy.

The move failed to get a vote on Thursday, effectively neutralizing the issue just one day before the House goes on August recess. Jordan then shortly announced his bid to replace the retiring Paul Ryan as Speaker of the House.

Check out the major trending news stories of today!