If elected, Jordan will be the second House speaker accused of covering up sexual abuse of high school wrestlers 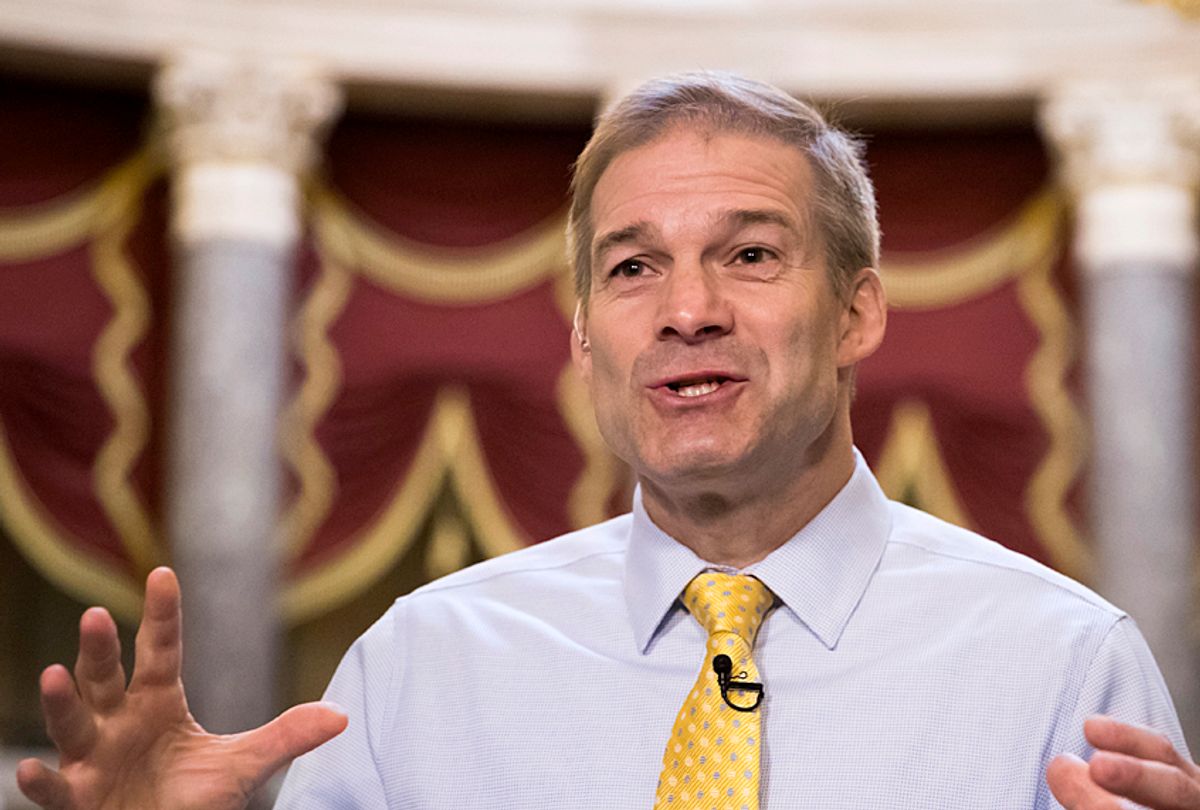 Apparently being accused of knowing about sexual abuse, and doing nothing about it, is not only cause for resignation from political office; it isn't even an impediment to seeking a still more powerful office — if you are a Republican.

"We’re running. There’s a letter as we speak that’s being sent to our colleagues," Rep. Jim Jordan, R-Ohio, told USA Today on Thursday. Jordan is perhaps best known as the co-founder of the House Freedom Caucus, a group of ultraconservative congressmen who have aligned themselves very closely with President Donald Trump and acquired considerable power during his presidency.

The incumbent Speaker of the House, Rep. Paul Ryan of Wisconsin, has made it clear that he hopes House Majority Leader Kevin McCarthy, R-Calif., will be his successor. But because he is retiring at the end of this term, Ryan will not be in a position to vote for McCarthy.

There are also a number of controversies surrounding Jordan, with the most troubling one being that he is accused of knowing about sexual abuse occurring at Ohio State University and did nothing about it.

Earlier this month it was reported that Jordan, who worked as an assistant wrestling coach at Ohio State University from 1986 to 1994, had been aware of accusations that an employee named Dr. Richard Strauss frequently behaved in an inappropriate manner with the team's wrestlers. The accusations against Strauss ranged from requesting unnecessary nudity during physicals and groping to regularly taking showers with the wrestlers. At least one wrestler said that he had told Jordan about the accusations; another, in a troubling story, recalled that Jordan confronted Strauss in order to make sure that no pass was made at him, rather than to protect the students.

"I remember I had a thumb injury and went into Strauss’ office and he started pulling down my wrestling shorts. I’m like, what the f--- are you doing? And I went out and told Russ and Jim what happened. I was not having it. They went in and talked to Strauss," Dunyasha Yetts told NBC News. He also said that he and his teammates broached the matter with Jordan in a number of conversations.

"Strauss’s locker was right next to Jordan’s and Jordan even said he’d kill him if he tried anything with him," Yetts claimed.

Yetts added of Jordan, "He’s a great guy. We would have all these great talks with him and he talked about how one day he’d be the president of the United States. So it’s sad for me to hear that he’s denying knowing about Strauss. I don’t know why he would, unless it’s a cover-up. Either you’re in on it, or you’re a liar."

In response to the accusations, Jordan told Politico earlier this month that "it’s not true. I never knew about any type of abuse. If I did, I would have done something about it. And look, if there are people who are abused, then that’s terrible and we want justice to happen."

Trump also went to bat to defend his close congressional ally, saying at a recent rally that "I don’t believe them at all," of the multiple accusations. "I believe him. Jim Jordan is one of the most outstanding people I’ve met since I’ve been in Washington. I believe him 100 percent. No question in my mind. I believe Jim Jordan 100 percent. He’s an outstanding man," Trump declared.

If Jordan winds up becoming Speaker of the House, he will not be the first Republican to hold that position in recent years despite a past that involves accusations of child sexual abuse. His predecessor, however, was an even more extreme case: Speaker of the House Dennis Hastert, an Illinois congressman who was eventually sentenced to 15 months in prison for financial crimes related to his attempt to cover up his abusive past. Despite being an outspoken opponent of gay rights who frequently conflated homosexuality with pedophilia, Hastert was a serial child molester whose legacy was ultimately disgraced by the revelation of him abusing children while serving as a wrestling coach.

Many Republicans, including former House Majority Leader Tom DeLay, wrote character references for Hastert even after he had been convicted.

Not surprisingly, Jordan would almost certainly prefer to avoid associations with Hastert and instead focus on shoring up his bona fides as a right-wing firebrand.

To that end, he worked with other members of the House Freedom Caucus to draw up articles of impeachment against Deputy Attorney General Rod Rosenstein, an effort that was rebuked not only by Ryan but by many Fox News commentators as well. While Jordan and other conservative House members have claimed that Rosenstein has not been sufficiently cooperative with them as they have attempted to acquire documents pertaining to the Trump-Russia investigation, critics have claimed that their real motivation is to punish Rosenstein for not squashing the investigation itself, which has been conducted since last year by special counsel Robert Mueller.

House Minority Leader Nancy Pelosi (a former Speaker of the House) also offered another theory about why Jordan was pushing for a Rosenstein impeachment, telling reporters that "I don't know, but what I've heard is Jim Jordan wants to take attention away from the scrutiny that he is under in Ohio, that could be a part of it."

If nothing else, the fate of Jordan's bid to replace Ryan will be very telling in terms of what it says about the rising prominence of sexual abuse accusations in our culture. Less than two years ago, a presidential candidate from Jordan's party was elected despite a series of sexual abuse accusations against him. In the subsequent period, the #MeToo movement has taken down a number of powerful men who had similar accusations of sexual abuse against them, from an Olympic team doctor (Larry Nassar) and a Hollywood producer (Harvey Weinstein) to a state attorney general (Eric Schneiderman) and a once-beloved comedy icon (Bill Cosby).

While Jordan has not been accused of committing sexual abuse himself, he can certainly be lumped in with former Penn State football coach Joe Paterno as someone who is accused of being aware of rampant sexual abuse and doing nothing to stop it. If that accusation doesn't ultimately factor into his bid to become Speaker of the House, it will demonstrate that the events of the past few years have not managed to reach into the corridors of power in Capitol Hill.

Molly Ringwald talks about the legacy of her movie roles.