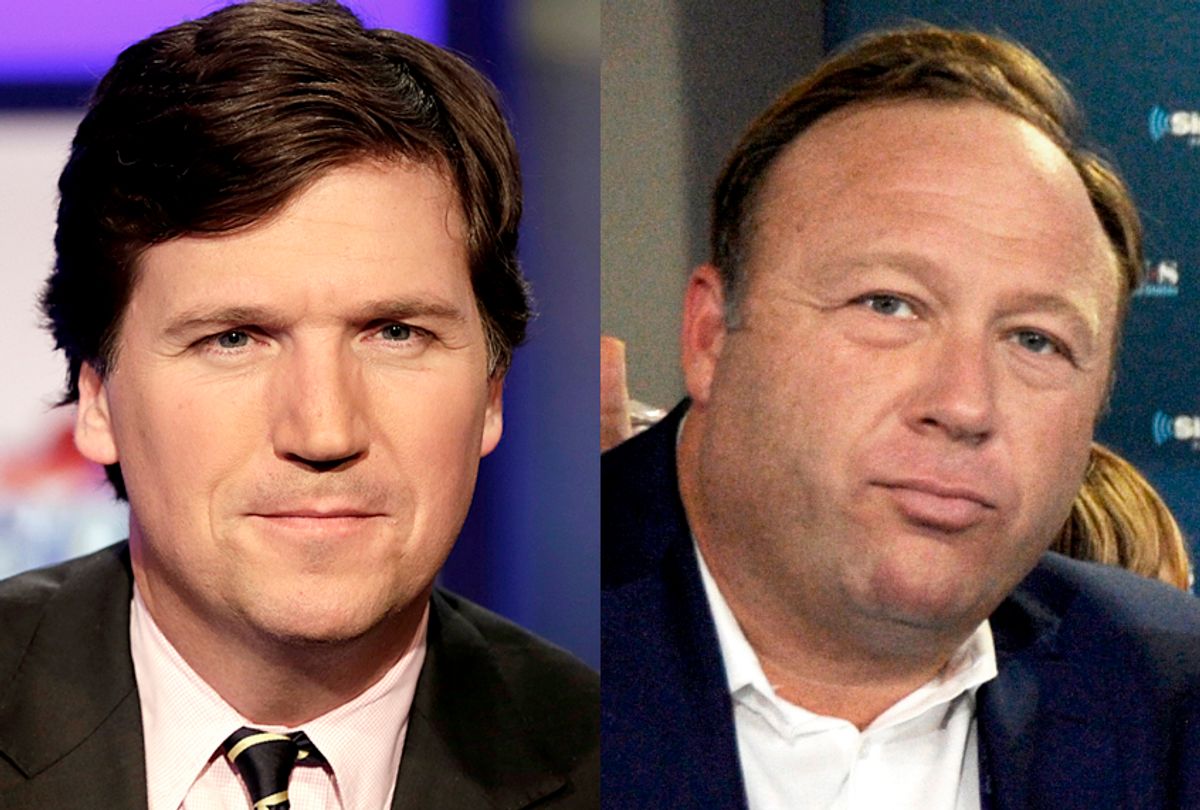 What began as a defense of Carlson's former employee at the Daily Caller, now-CNN reporter Kaitlan Collins, turned into a full-throated defense of one of the worst purveyors of fake news.

"But," Carlson insisted, "CNN has been basically a martyr for free speech for the last 24 hours."

He continued: "At the same time they are telling us how important it is that people should be able to say what they think, they are agitating for Alex Jones to be pulled off YouTube."

"Now, I know we're supposed to think that Alex Jones is way more radical than, like, Bill Maher, or Michelle Wolf, or Rosie O'Donnell," Carlson added, "but he's got a point of view, and CNN is trying to squelch his point of view."

Carlson's comments after news reports revealed that Facebook suspended Jones for 30 days for violating its policies against bullying and hate speech on Thursday.

“Our community standards make it clear that we prohibit content that encourages physical harm [bullying], or attacks someone based on their religious affiliation or gender identity [hate speech]," a Facebook spokesperson told The Guardian. "We remove content that violates our standards as soon as we’re aware of it. In this case, we received reports related to four different videos on the pages that InfoWars and Alex Jones maintain on Facebook. We reviewed the content against our community standards and determined that it violates. All four videos have been removed from Facebook."

The news comes after YouTube removed four InfoWars videos from Jones' channel, which has more than 2.4 million subscribers, on Wednesday for violating its community guidelines. As my colleague Nicole Karlis reports, "two more strikes could result in Jones being barred from the video-sharing site — the main outlet by which InfoWars' distributes its videos."

Two of the videos in question promoted anti-Muslim content, including Jones claiming that Muslims were taking control of European countries, according to reports from multiple outlets.

"Another was flagged for anti-transgender content, in which Jones appeared to threaten transgender people," NBC News reported. "The fourth showed an adult man and a young boy engaged in a physical altercation under the title ‘How to Prevent Liberalism.'"

The right-wing media personality criticized YouTube's decision on Facebook and claimed that YouTube's move was an attempt to censor his conservative ideas. He then asked his followers on Facebook to watch the videos and decide for themselves.

"YouTube has removed four Infowars videos that were critical of liberalism," Jones said. "But you can watch the videos here and make up your own mind – instead of letting YouTube to do it for you."

Of course, Carlson has appeared on Jones' show in the past: