John Dean shares a commonality with Michael Cohen: "There was a huge effort to discredit me"

"It was just my word against Nixon's until the tape came out, and they worked mightily to try to discredit me" 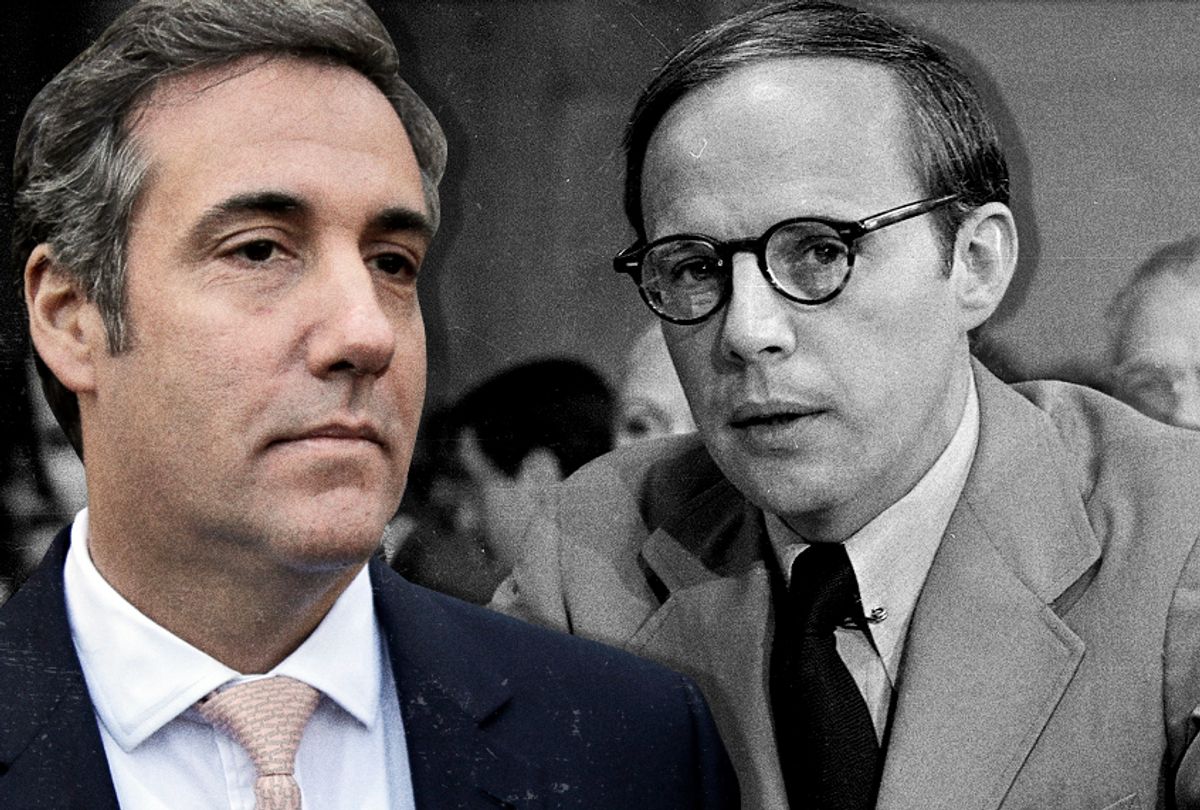 One of the most prominent figures in the scandal that ended the presidency of Richard M. Nixon issued a warning for President Donald Trump. John Dean, the former White House counsel to Nixon whose Senate testimony was considered significant in the eventual ouster of his embattled boss, said Trump could be implicated if longtime personal attorney Michael Cohen turns on Trump and informs special counsel Robert Mueller that Trump knew of the 2016 Trump Tower meeting ahead of time.

"I don't think it is boding well for the president," Dean told CNN. "It's clear, as I read the situation, that Michael Cohen is looking for a deal and he is upping the stakes."

Earlier this week, Cohen released audio recordings of himself and Trump from 2016 that make it clear that Trump was aware of an attempt to quash a report about his alleged affair with former Playboy model Karen McDougal. The effort has incited fiery attacks against the attorney from the president and his legal team — a situation with which Dean is familiar.

"When I became a witness, there was a huge effort to discredit me," Dean said. "It was just my word against Nixon's until the tape came out, and they worked mightily to try to discredit me."

Dean has long been critical of Trump. He recently suggested that Trump could be inching toward his own Watergate moment. But, he said Fox News could help Trump ride his term to its end in spite of the mounting scandals he faces.

According to Dean, if the conservative news network – which launched more than 20 years after Nixon resigned in disgrace – was around in the '70s, it is possible that Nixon could have "survived" the web of political scandals and cover-ups that surrounded him.

"Nixon might have survived if he had Fox News and the conservative media that exists today," Dean said

Trump has elicited broad comparisons to Nixon over the uncertainty surrounding alleged collusion between his presidential campaign and Russians who meddled in the 2016 election – the focus of a special counsel investigation. Recently, The New York Times reported that Trump was shown evidence indicating that Putin ordered cyberattacks designed to sway the election as early as January 2017.

Trump recently touched off a major political controversy in the fallout of his joint press briefing with President Vladimir Putin of Russia over his assertion that he believed the tyrant's word over the findings of the U.S. intelligence community.

While Dean sees several similarities between the presidencies of Nixon and Trump, he believes that the current political climate favors the White House – a crucial difference that could protect his political future.

"I doubt Trump will be forced from office – even if Mueller has tapes of him talking with Putin about how to rig the election," Dean said. "While we might have a Democratic House after the 2018 elections, which could impeach Trump, I do not see the needed 67 votes in the Senate to find him guilty and remove him from office. And, given the fact he is shameless, he will never resign."