Is Rudy Giuliani truly a bumbling idiot? Maybe — or he's an effective agent of chaos 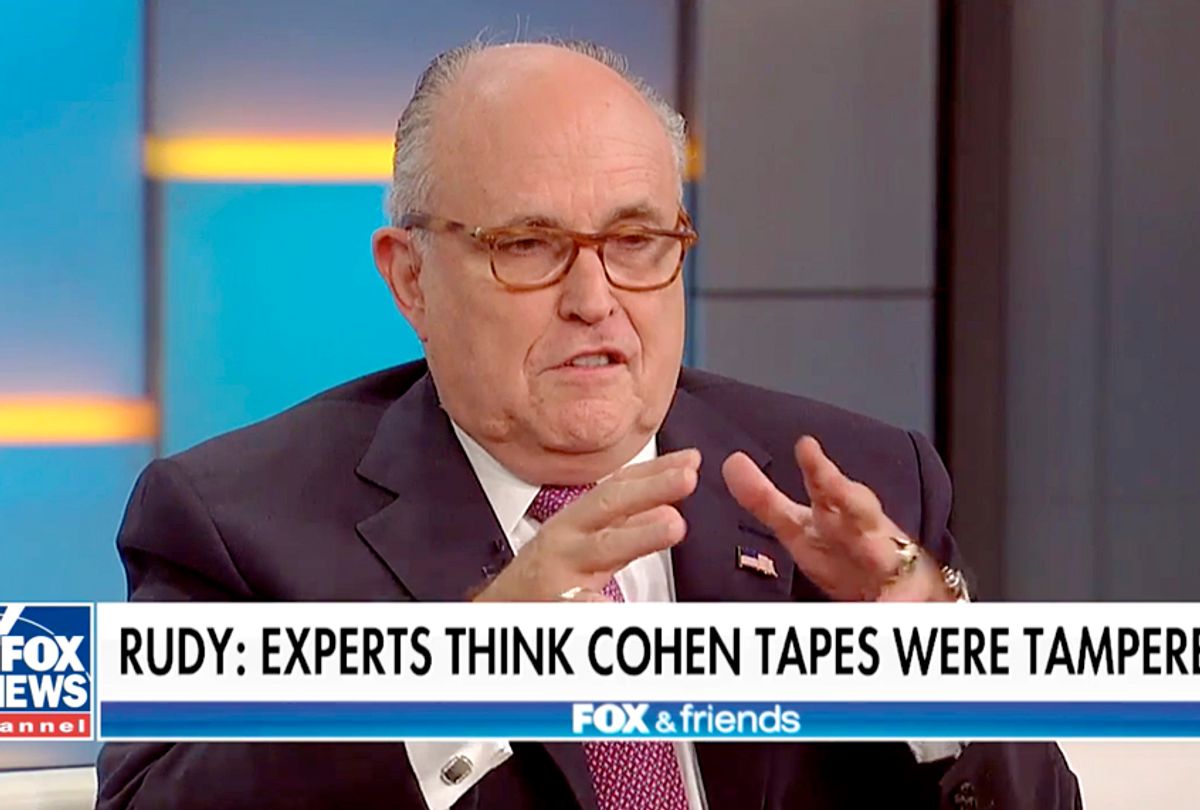 “The man is a liar,” Rudy Giuliani told CNN’s Chris Cuomo, referring to Michael Cohen. As recently as two months ago Giuliani had called Cohen, Donald Trump’s longtime personal counsel, an “honest and honorable lawyer,” but in light of revelations that Cohen had potentially flipped on his former client, Giuliani’s attacks have become frequent and blistering.

Giuliani’s recent appearance on "Cuomo Prime Time" was only one in a recent spate of interviews the former New York mayor has given in defense of Trump since he joined the president’s legal team in April. These affairs have been bizarre occurrences in which Giuliani gesticulates wildly and bulges his eyes while he rambles incoherently. Each appearance has been more puzzling than the last.

Recently, however, Giuliani has been flooding the airwaves in response to Cohen’s revelations, including a leaked recording of Trump discussing paying off Karen McDougal, a former Playboy model who says she had a relationship with Trump, and then the assertion that then-candidate Trump knew in advance that his son and campaign staff were planning on sitting down with Russians in the now-infamous June 9, 2016, meeting at Trump Tower.

Seemingly every night has brought a new interview with Giuliani, and with every one of these appearances the already-muddied waters only manage to darken even further. Crisscrossing between networks, Giuliani has maintained a disastrous press schedule that has seen him fail so badly he’s had to later call into the networks in order to clarify his recent statements.

On Fox News he sat down with the laughing cast of "Fox & Friends," Donald Trump’s favorite television show, and told them he couldn’t find it written anywhere that collusion was a crime.

That curious strategy has already been embraced by the president himself, who tweeted early Tuesday morning: “Collusion is not a crime, but that doesn’t matter because there was No Collusion …” Apparently the Trump team has decided on a multi-pronged battle plan in which they simultaneously deny that the president has colluded with foreign powers while arguing that, even if he had, there’d be nothing wrong with it.

Head-scratching as it is, this public relations blitz is just another attempt by Trump and company to get out ahead of a scandal that could end his presidency, an endeavor assisted time and again by America’s cable networks, which continue to give Trump and his associates all the airtime they could possibly ever want.

Though Giuliani has largely come off as a bumbling fool in his recent turns before the cameras, his job has never been to fully explain away the storm of allegations and scandals surrounding the presidency. Instead, Giuliani has been running interference and confusing an already confused situation, especially by giving Trump’s supporters talking points they might use to explain away any controversy.

A recent poll conducted by CBS News/YouGov found that 91 percent of the president’s supporters trust Donald Trump for accurate information, an overwhelming response that shows just how much sway Trump has over his base. This control was cemented in the 2016 presidential campaign when Trump’s criticisms of both Fox News and Republican stalwarts largely isolated his voters from looking elsewhere for facts. That grip has only tightened with every Trumpian attack on “fake news” and the mainstream media.

That media Trump has repeatedly decried and vilified has shown an unhealthy obsession with letting the president and his supporters come on television and spin their message. Hardly a panel on CNN goes by without a former Trump staffer or adviser toeing the party line. Whenever a sycophant like Giuliani comes calling, the networks can barely wait to broadcast whatever drivel he has to say over their airwaves.

This isn’t the first time they’ve made this mistake. It’s been a consistent misstep in the media’s coverage of Donald Trump and has been the norm since he first announced his candidacy. Though media outlets have regularly questioned their complicity in his political ascension, they’ve continued to fall into the same trap over and over again, and, to the detriment of the country, have kowtowed to the specter of politics as entertainment.

That kowtowing has its roots in June of 2015, when Trump rode the escalator down in Trump Tower and announced his intention to run for president. In the beginning the whole thing was a lark, a campaign that the Huffington Post consigned to its entertainment section as self-evidently not "real" politics. Pundits and experts everywhere largely expected Trump’s bid to fizzle out by the time the Iowa caucuses rolled around or negotiations began for the new season of "Celebrity Apprentice," whichever came first. In the meantime, the networks were going to fill their programming with as much entertainment as they could get. Whenever Trump stood behind a podium, the cable channels had their cameras at the ready.

Trump was unavoidable in the summer of 2015. Every time you clicked through the channels he’d be there, pounding away at his xenophobic and hateful message before an ever larger audience. The cable networks skipped commercial breaks in order not to miss whatever offensive thing Trump might say next, and their ratings continued to climb.

By the time it was over, it was estimated that Trump had received $5 billion in free advertising from the coverage. That jaw-dropping figure certainly made a difference as the upstart candidate built an unwavering base and completed his takeover of the Republican Party.

His appeal was exactly what you would expect. The networks knew that Americans wanted to see what offensive and crazy thing Trump might say next. It was as if Howard Stern had suddenly become a political entity. The effect his candidacy on cable news was likewise beneficial as they enjoyed record numbers of viewers and increased advertising rates. There’s certainly truth in what Trump has said in regards to their symbiotic relationship. They needed the spark he brought to politics, and they needed it bad.

What Trump had tapped into was a desire for narrative in American politics, particularly narrative that could compare to the tension in our prestige television dramas. For decades, politicians on both the right and left have cultivated personas that have more to do with reality television than the realities of governance, and after years of festering, Donald Trump, the largest TV character of them all, was poised to take over.

Cable news is in no way solely responsible for Trump’s presidency or our current predicament – racism, economic disparity, political corruption and widespread cynicism certainly deserve their share of the blame. But the continued reliance on “new developments,” “breaking news” and salacious headlines have turned the American voting public into a viewing audience of anxiety addicts who now understand politics not as a matter of dialogue and compromise but a zero-sum gladiatorial battle.

Those who doubt as much need only to look to an earlier incident, this one involving former Trump aide Sam Nunberg, who took to cable news, much like Rudy Giuliani, to air his incoherent grievances last March. These appearances were spurred on by Nunberg having received a subpoena from Robert Mueller's team of investigators and his subsequent vow not to honor the summons. Over the course of one day, Nunberg seemingly appeared on every major show to voice his intent and rambled on for hours. It wasn’t until CNN’s Erin Burnett confronted Nunberg in the evening, telling him she smelled alcohol on his breath, that the manic spree came to a merciful end.

Nothing came of Nunberg’s appearance besides rampant speculation stemming from his off-the-cuff remarks. There were no developments, no new clues in the public arena. What Nunberg has provided Mueller's investigation, when the cameras haven’t been rolling, is another question entirely. It would do all of us a lot of good to remember that this is where the real action is happening: outside the public eye.

Our dependence on the entertainment aspect of politics has led us far astray and has empowered a demagogue who regularly shows that he is similarly addicted to the stream of attention and incapable to control the narrative for longer than a few minutes at a time. What has kept Trump afloat, however, is his ability to continually pump the news cycle with overwhelming amounts of information, so much that it overloads our ability to process and give context to the crisis we face.

This battlefield is where Donald Trump thrives. In his 2016 campaign he was constantly besieged by scandal but was able to turn the irresistible flood of stimuli into an unusual but effective means of defense. Giuliani’s turn as a chaos agent has furthered that strategy, and as long as reputable news organizations continue to give time to those whose only agenda is to obscure and confuse issues that in reality are playing out behind closed doors, we'll never be able to see anything through the muddy waters.

Former White House communications director on the challenge of handling Fox News, then and now.