Why mothers defend Roe v. Wade: Abortion is a fact of life for parents, too

The majority of women who have abortions are already mothers. Being a parent makes me support choice 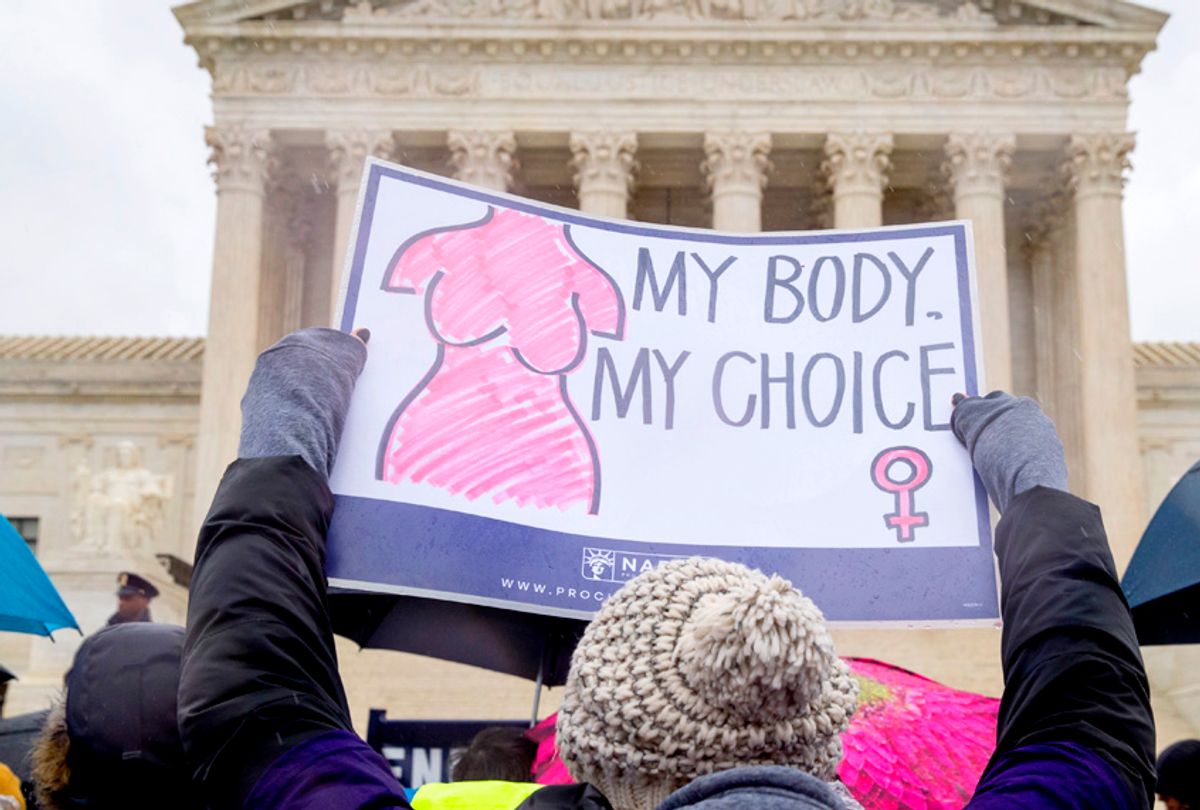 The voices of the anti-choice movement have a specific vision of their enemy. It's a selfish, reckless young woman who believes in abortion out of "convenience." It certainly couldn't be a man, because men don't care about these things. It couldn't be a woman who understands the experience of motherhood, because once you hold a little baby in your arms, you could never condone abortion. This of course it patently untrue. And it drives the enemies of reproductive rights crazy.

Earlier this week, my friend Deborah Copaken wrote an honest, fearless account of her reproductive history — three children and two abortions. She explained the personal and health reasons she terminated two pregnancies at different stages in her life, and also why she chose to go forward with an unplanned pregnancy in her late 30s. Here's a simple inconvenient truth opponents of choice don't want to acknowledge — for a lot of women, abortion makes their future families possible. My friend's entire adult life, a life that includes three great kids, would be unimaginable without the abortions that have also been a part of it.

Deborah is not unique; plenty of the mothers I'm friends with have had abortions. Plenty of yours have too, whether you want to admit it or not. Here's your evidence. According to the Guttmacher Institute, "Fifty-nine percent of abortions in 2014 were obtained by patients who had had at least one birth." And sorry, the women having abortions aren't godless heathens: "Seventeen percent of abortion patients in 2014 identified as mainline Protestant, 13% as evangelical Protestant and 24% as Catholic." Yup, a full quarter of the women seeking abortions are Catholic, just like I am. Put that in your conclave and smoke it.

I know mothers who've had abortions when they were young and their circumstances would have made raising a child impossible. I know mothers who had them when they were older and they had serious health considerations. They had them for all kinds of reasons. They were all deeply personal and all made thoughtfully, because no one has any better sense of their private needs and those of their families than they do. End of story.

I have never had an abortion. I've had two children and I've had one miscarriage from an unplanned pregnancy. I still grieve that loss, and would have gone forward if my body had not had other ideas, despite the far less than ideal circumstances in my life at the time. I also spent two years in a clinical trial for late stage cancer, and I would not have hesitated for a moment to choose to terminate if I'd become pregnant during that time. Not when the choice would have been between continuing treatment and living or miscarrying and dying. Any religious or political leader who would take that option from a woman, from a mother trying not to die so she can raise her children, honestly has no sense of how valuing life actually works. Or, for that matter, the blessing of choice.

Few things I can say in public provoke more logic-defying fury than when I mention that because I was conceived out of wedlock before Roe v. Wade, my mother didn't have the options I have been blessed with and that I fight for my daughters to keep. I, unlike pundits like Kevin Williamson, do not rejoice in my mother's forced parenthood — a situation that my father, who walked away before I was even born, never had to endure.

About a year ago I got an email from a young woman whose mother had experienced a high risk pregnancy but decided to continue it, resulting in her beloved sibling. She truly couldn't understand why a mother might make a different choice. I told her the key word there was "choice." Her mother got to make a decision about her pregnancy. What sadist would deprive any other woman of the same right? Why demand that women die — and women keep dying, all across the world, every day — so they can carry nonviable fetuses? Why demand they give birth to babies they aren't financially, physically, or mentally competent to care for? Could it be about something other than fetuses? Like a fury over women controlling their own lives? I don't expect to change anybody's mind, by the way, I'm just spitballing here.

"Close your legs" and its corollary, "Tell you daughters to close their legs" is a thing that people actually write to me all the time. And if that doesn't tell you a whole lot about the fear and contempt surrounding women's sexuality that's at the slimy bottom of the anti-choice rhetoric, I don't know what is. Believe me, I am all for women refusing to have sex with men who don't support their bodily autonomy, and the fewer d-bags getting laid out there the happier I am. That said, this specious argument ignores reality. For starters, it puts the entire burden of pregnancy prevention on women, despite the necessary male component of impregnation. Second, the Guttmacher Institute reveals that "Fifty-one percent of abortion patients in 2014 were using a contraceptive method in the month they became pregnant." Shocker! Contraception doesn't always work. Third, there's something called sexual assault. Rapists don't really pay attention to your evangelical insistence on clenching your knees.

There are people who would truly rather women and their doctors be murdered than see them have access to a safe and (so far) constitutionally protected right. I hear from these men all the time. (It's mostly men.) They don't care about our country's shameful maternal mortality rate. They don't care about healthcare or education. I get truly scary vitriol sent my way regularly, but it really ramps up whenever I express the fact that I'm a mother who supports choice and who wants my teenage daughters to have the freedom to choose when and if they have children. This means access to birth control, morning after pills and abortion. Because I love them more than anything in the universe and I want them to be educated, independent, and healthy. People who want to protect their daughters are called mothers. And people who are frightened of that prospect are called misogynists.