Ivanka Trump's only store turned into a Trump-branded shop overnight 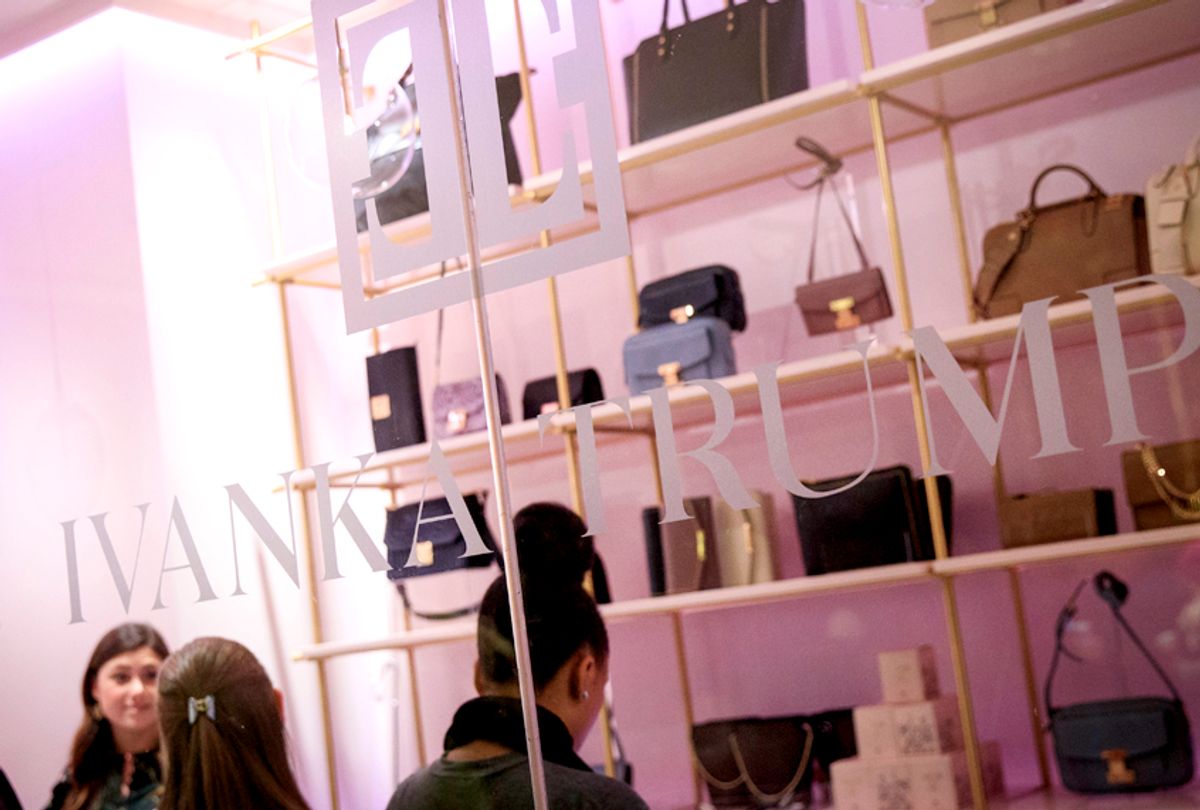 In a day, Ivanka Trump's namesake fashion store at Trump Tower, which was the brand's only physical location, converted into a Trump-branded store, Business Insider first reported. On Tuesday, the store was open and selling Ivanka's clothes, shoes and accessories. By Wednesday, it sold Trump-branded merchandise.

"Asked about the change on Wednesday, an employee told Business Insider that Ivanka's brand had shut down," according to Business Insider. "The Ivanka brand's logo was scrubbed from the glass windows outside of the store and replaced by a Trump Store logo. Trump-branded goods lined the shelves that contained Ivanka-branded items the day before."

Last week, the first daughter and assistant to the president, announced the closing of her namesake brand in order to focus on politics and policy in Washington.

READ MORE: The first casualties of the trade war are Trump supporters

"Online sales of the Ivanka Trump brand sold at Amazon.com, Macy’s Inc., Bloomingdale’s and Zappos.com fell nearly 55% in the 12 months to June, compared with the year-earlier period, according to Rakuten Intelligence, which gathers email receipts from 5.5 million U.S. consumers," The Wall Street Journal reported. And, as Axios reported, a daily consumer perception survey conducted by YouGov, found that out of more than 1,600 brands, "both the Trump Hotels and Ivanka Trump brands fall in the bottom 10."

However, it appears that poor sales wasn't the only factor motivating the president's eldest daughter to shut down her business. There was also the issue of conflict of interest. (After Nordstrom dropped Ivanka's line, the president tweeted that the company had treated her "unfairly." And, in a television interview last year, senior adviser Kellyanne Conway told viewers on "Fox & Friends": "This is just a wonderful line. . . I own some of it—I’m going to give a free commercial here. Go buy it today, everybody, you can find it online.")

While Ivanka had formally parted ways from her fashion business in the spring of 2017, she still owned the brand, received a multimillion-dollar annual income from it, The Wall Street Journal reported, and wore her namesake brand repeatedly — notably while photographed in the White House during meetings, press conferences and other official capacities, effectively acting as a walking billboard.

Yet, "In an effort to minimize conflicts between her duties as a White House adviser and her financial interests as a business owner, the 36-year-old Ms. Trump has placed her company, IT Collection LLC, in a trust run by family members, just as her father, President Donald Trump, has done with his businesses," according to The Wall Street Journal. "She receives certain financial information and a share of the profits, but says she doesn’t participate in management."

When sharing the news to the Ivanka Trump staff about the business shutting down, Ivanka said the move was something she had been thinking about in the past few months, after growing frustrated by the restrictions imposed, as part of the IT Collection LLC, The Wall Street Journal reported. Among these restrictions is the inability to forge new foreign deals.

A representative for the brand told Business Insider that Ivanka's line will still be produced and sold by licensing partners.

In a 2016 interview with Salon, economic commentator Larry Kudlow, who has been named a top economic adviser to President Donald Trump, opened up about his plans for economic growth, tax rates and trade.