None dare call it collusion: Whatever word we use, Trump's entanglement with Russians is a big deal

Republicans are now trying to say that collusion — whatever that word means — is no big deal. They're wrong 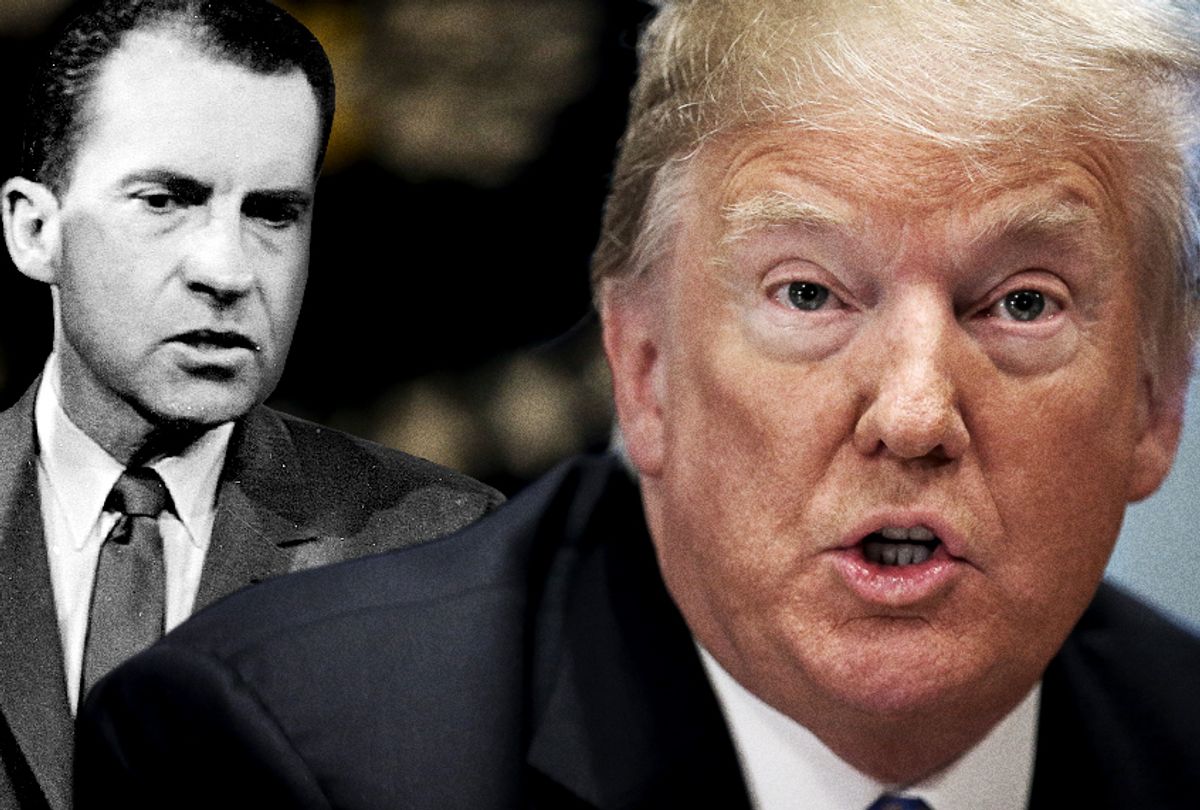 It shouldn't be necessary to explain why it's wrong, not to say potentially criminal, for a presidential candidate to work with a foreign power to undermine his opponent's campaign. Unfortunately, we live in the era of hyper-partisanship, and as a result, many Republicans and their media supporters — the same people who have insisted for months that there was "no collusion" between Trump and Russia — are now presenting a different spin: If there was collusion, it would be no big deal.

We can start with a Tuesday morning tweet by President Trump himself.

Then there was this bizarre statement by Rudy Giuliani, New York's former "hero mayor" who has taken Michael Cohen' former job as a lawyer and shill for Trump.

"I don't even know if that's a crime — colluding with Russians. Hacking is the crime. The president didn't hack. He didn't pay for the hacking," Giuliani proclaimed to CNN on Monday.

Even before Giuliani was carrying Trump's water, former New Jersey Gov. Chris Christie was on ABC News on Sunday, claiming that even if everything Cohen has said or hinted about Trump is proved to be true, there's simply nothing to get all upset about.

"We don't even know if the information that we're being given by that other outlet is even accurate," Christie told ABC, apparently referring to Cohen. "Now, if it is, and we've discussed this before, collusion is not a crime. And so the fact of the matter is that we're a long way away yet from having anything to talk about here."

Fox News host Tucker Carlson is aboard the same train. He told his viewers on Friday night that even if  Trump actually colluded with the Russian government during the 2016 campaign, well, so what?

"What exactly would the crime here be? It's not illegal to talk to foreigners. Nobody is claiming that any information changed hands, though even if it did, so what?" Carlson said, according to a transcript from Media Matters for America.

A day before that, National Review contributing editor Andrew McCarthy tried to characterize working with a hostile foreign power to win an election as merely "icky" rather than sinister.

"Look, I don't think that it's bad if campaigns are turning to foreign governments for dirt. It's not collusion, it's not something that's impeachable, it's icky. But that's what this is," McCarthy said, according to a transcript from Media Matters for America.

Allow me to demonstrate the fallacy in this reasoning with a Watergate comparison.

In many ways, the parallels between the Trump-Russia scandal and Watergate are quite striking. Both involved efforts by Republican candidates to dig up dirt on their Democratic opponents. Both memorably involved famous pieces of real estate: the Watergate complex in Washington; Trump Tower in midtown Manhattan. Both dealt critical damage to the presidencies of the men implicated in these messes, even if it remains unclear whether Trump will ever be forced into the resignation that, regardless of what happens, future historians will agree that he richly deserves.

But practically speaking, there is one key difference between the Nixon-McGovern election of 1972 and the Trump-Clinton election of 2016. To illustrate this point, I turn to this passage from "The Making of the President -- 1972" by Theodore H. White.

In this writer's opinion, it is possible that at least three or four million Americans were so disillusioned by both candidates that they chose not to vote at all. Had it not been for Watergate, it is quite possible that Richard Nixon's margin would have been increased by another three or four million votes — that, indeed, his stunning 61-38 victory might have gone as high as 65-35, for a record that might never again be approached in American two-party history. The Watergate affair blew that opportunity.

This is where the contrast with 2016 becomes crucially important. As statistician Nate Silver has pointed out, we will never know for sure how much Russian disinformation campaigns and the hacking of Democratic Party email accounts hurt Hillary Clinton among voters. Silver observed that polls can demonstrate that former FBI Director James Comey's letter to Congress in late October "probably did cost Clinton the election," but the Russian campaign against Clinton is not measurable.

As Silver put it, that campaign may have had no impact whatsoever, or may have caused "chronic, insidious effects that could be mistaken for background noise but which in the aggregate were enough to swing the election by 0.8 percentage points toward Trump — not a high hurdle to clear because 0.8 points isn’t much at all." Because the campaign of Russian interference was spread out over an extended period of time, however, its effects cannot be determined with certainty.

Just because hard data is wanting here doesn't mean common sense can't fill in at least some of the gaps. Anyone who paid attention during the 2016 election was aware, at least vaguely, that "Clinton's emails" were a bad thing. Similarly, they developed the general impression that the emails published by WikiLeaks in the summer of 2016 were damaging, and proved or suggested that Clinton and those around her were corrupt and dishonest.

To be fair, a large proportion of voters had the same general impression about Trump (and with far more reason, although right now that's not the point). So it's fair to assume that many of them simply sat out of the election — more than would have been the case had Clinton's image of "corruption" been limited to overtly partisan attacks coming from Republicans rather than being an all-sides barrage orchestrated by the Russian government and embraced, to a disgraceful degree, by The New York Times and other mainstream publications.

Lest we forget, Clinton won the national popular vote by two percentage points and nearly 2.9 million votes in spite of these challenges -- a much greater margin than Jimmy Carter's over Gerald Ford in 1976 or Nixon's over Hubert Humphrey in 1968. It is reasonable to speculate that Clinton's popular-vote lead would have been significantly larger without the Russian hacking and disinformation and that she almost certainly would have won the Electoral College as well. So while the Watergate scandal had no meaningful effect on the 1972 election, there is a strong chance that collusion -- or, to use a more accurate term, criminal conspiracy -- between the Trump campaign and the Russian government actually put Trump in the White House.

Of course, there is also the almost unmentionable possibility that the Russians did something which Nixon and his cronies never pulled off — actually tampering with the election results themselves.

Salon reached out to Kyle Kondik of Sabato's Crystal Ball and the University of Virginia's Center for Politics to ask whether the disparity between poll numbers and election results in 2016 could indicate tampering — and whether Americans should be concerned that the 2018 midterms could be compromised. Kondik says he thinks the 2016 result was on the level, statistically speaking.

We shouldn’t take polling as a perfect prediction of the truth, particularly if there are reasons why the polling may be off in a systematic way (in this case, it seemed like some of the swing-state polls overstated the education level of the electorate, something that is common in polling).

I get a lot of questions from people wondering if the [2016] results seemed tainted. My reply is typically to say that if the results were rigged, they were rigged in a very sophisticated way, because to me the results make sense based on the educational split (and other factors) across both competitive and noncompetitive states.

What would a hypothetical scenario look like in which America's election results had actually been rigged by hackers? Kondik thinks certain patterns would give it away: "If similar types of counties demographically were voting in really different ways, or if there were drastically different patterns in competitive vs. noncompetitive states."

Kondik agreed that a sophisticated hacker could take such factors into account and try to cover their tracks, but said, "I think it would be hard with our decentralized voting system."

Christy Setzer, president of the Washington public relations firm New Heights Communications in Washington, told Salon by email that Democrats' best strategy to counteract possible Russian interference is simply to "cede no ground." Conventional wisdom holds, she said, that Republicans "can prevail if attention stays on a growing economy — but that should be easy territory for Democrats to compete on as well." Don't try to come off like "GOP-lite," she urged, and don't forget about the Supreme Court: "Americans don't want to overturn Roe or the Affordable Care Act, nor do they want a Court that will. Use it."

When asked what advice she had for Republicans, Setzer said, "Ask for help from the Russians?"