The president's eldest son also dismissed history classes, as "academia has been so wrongly influenced by the left" 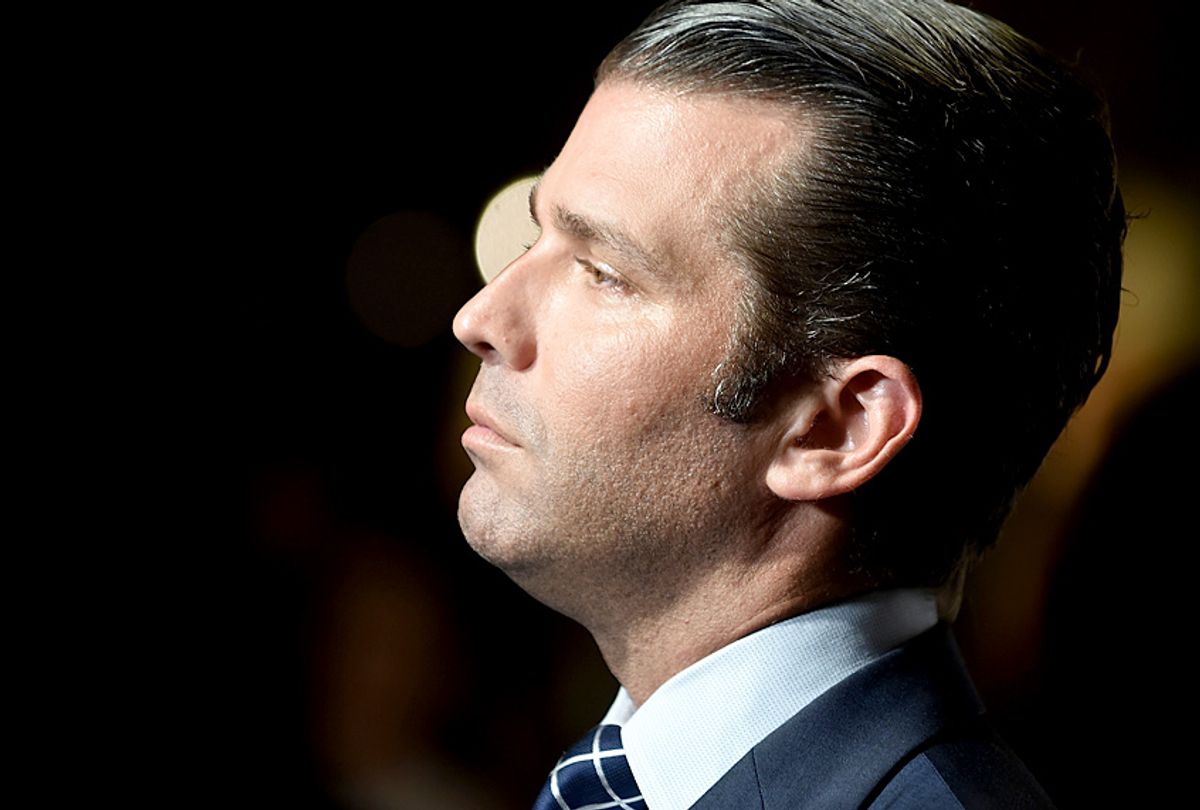 Donald Trump Jr. has drawn parallels between the current platform of the Democratic National Committee and Germany's Nazi Party in the 1930s, suggesting the pair are "awfully similar" to each other.

Trump Jr., the president's eldest son and executive vice president of the Trump Organization, made the controversial remark Thursday while attending a premiere for the right-wing pundit Dinesh D'Souza's film "Death of a Nation," which attempts to draw parallels between Civil War-era Democrats and Germany's Nazi Party.

"I've been hearing the left talking about these things: fascism, Nazism on the right," Trump Jr. said during an interview with One America News Network. "And when you look at the actual history of how these things evolved – and you actually look at that platform versus the platform of the modern left – you say, 'Wait a minute, those two are very heavily aligned and, frankly, contrary to the right.'"

While supporting D'Souza's documentary, Trump Jr. also suggested that Americans should not trust what they have been taught in a history class, because "academia has been so wrongly influenced by the left."

"You see the Nazi platform in the early 1930s and what was actually put out there, and you look at it compared to – like – the DNC platform of today, and you’re saying, 'Man, those things are awfully similar – to the point where it's actually scary,'" Trump said. "To me, that was one of the most striking things I took from the movie, because it’s the exact opposite that you’ve been told."

Trump Jr. conducted only two interviews at the event, one of which was with the right-leaning One America News Network, according to the Washington Post.

Trump Jr.'s remarks parallel D'Souza's movie and accompanying book, "Death of a Nation: Plantation Politics and the Making of the Democratic Party," which compares his father to President Abraham Lincoln and suggests that Adolf Hitler was a liberal who was inspired by Civil War-era Democrats.

"'Death of a Nation' draws a provocative analogy between Lincoln and Trump," D'Souza explained. "Not that they're the same people, but that they've fallen into the same situation. Not since 1865 have Democrats so dramatically refused to accept the outcome of a presidential election."

In May, President Donald Trump granted a full pardon to D'Souza, who pleaded guilty in 2014 to violating campaign finance laws for making illegal contributions to a Republican Senate candidate in the name of others.

While Trump Jr. spoke approvingly of D'Souza and his quest to own liberals in his film, he did not mention his father's infamous comments about last year's torch-lit white supremacist rally in Charlottesville, Virginia in support of statues of Confederate generals. "You also had people that were very fine people on both sides," the president said about the incident, which turned deadly when a white supremacist drove his car at high speed into counter-protesters.

In June, Trump Jr. addressed the criticism that the GOP had become a cult under the current president made by Bob Corker, the Republican Senator from Tennessee.

“If it’s a cult, it’s because they like what my father’s doing,” he told "Fox & Friends." “You see real Americans actually winning for a change, conservatives actually getting things done.”