Don't laugh off Trump's LeBron James insults. His racist rhetoric can reproduce at a rapid rate

Trump has been insulting minorities since before he was in office. It's one of his most consistent public messages 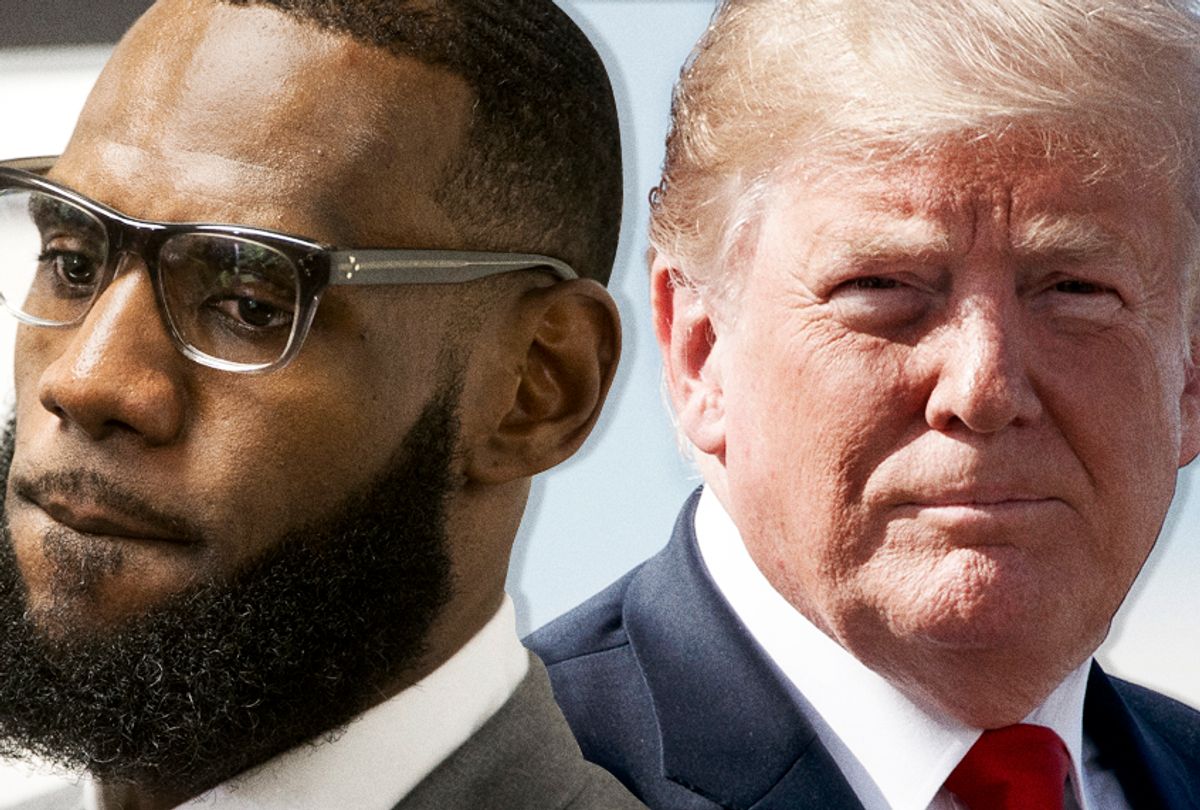 “LeBron James was just interviewed by the dumbest man on television, Don Lemon. He made LeBron look smart, which isn’t easy to do. I like Mike!”

That was Donald Trump’s response to an interview that NBA megastar LeBron James did with CNN’s Don Lemon last week, where the athlete said, "What I've noticed over the past few months, he's kinda used sports to kinda divide us, and that's something that I can't relate to."

"Sports was the first time I was ever around someone white," James continued. "I got an opportunity to see them and learn about them, and they got the opportunity to learn about me ... And I was like, 'Oh wow, this is all because of sports.'"

Many are offended by Trump's response. Why is our president using his platform to hate on a tax-paying citizen who is using his own money to fund an innovative school in order to fix a problem that the government should be solving?

I've heard other people laughing it off, though, taking Trump’s tweet as a joke. You know, “Trump is crazy, man, he’s funny, he’ll attack anyone!” I’m guessing that they are forgetting that taking Trump as a joke is how we ended up with him in the Oval Office in the first place.

But the bigger issue for me is how dangerous it is that it makes our president so happy — excited even — when he gets the chance to call black and brown people dumb.

You can look at the career paths of both Lemon and James, and even if you disagree with them on certain topics and issues, anyone can clearly see that those men aren’t stupid. Trump's racist antics against black athletes have been going on for a while now — LeBron James isn’t alone. Remember the president has engaged in public feuds with Marshawn Lynch, Stephen Curry and Colin Kaepernick, whose protests against police brutality prompted the President to say, “Wouldn’t you love to see one of these NFL owners, when somebody disrespects our flag, to say, ‘Get that son of a bitch off the field right now. Out. He’s fired. He’s fired!’”

Trump has also traded jabs with Lavar Ball, but never responded to the white men in professional sports who attacked him directly, like Steve Kerr or Greg Popovich, who said, “We have a pathological liar in the White House. . . . Unfit intellectually, emotionally, and psychologically to hold this office, and the whole world knows it, especially those around him every day."

Then there was the time at that rally in Montana when the president called Rep. (and national hero) Maxine Waters a “low-IQ individual.” Add that to his comments that Nigerians live in huts, Haitians have AIDS, and Mexicans are thieving gang-affiliated rapists, and we get a clear picture of who Donald Trump really is.

The danger comes into play with perception. It doesn’t matter if you like Donald Trump or not. He is the President of the United States and people listen to presidents. It doesn’t matter if the commander in chief is a racist or a bumbling idiot who stole his position; people listen. They follow what he says at his racist rallies, they read his tweets, and they watch Fox News — a lot of Fox News.

According to Statista, a recent poll showed Fox News ranked first over MSNBC and CNN, averaging 2.39 million viewers in primetime. MSNBC and CNN both challenge and condemn Trump’s racist rants and ideas, while the people at Fox — including in-house pundit hosts like Sean Hannity — work around the clock to push a narrative that Trump is right. So many Americans rely on Fox and other right wing media outlets for all of their information. So if Hannity or Rush Limbaugh or Laura Ingraham is your guide to what’s happing in our democracy, you are constantly being bombarded with stereotypes and racist ideas presented from an extremely limited perspective. MSNBC and CNN are far from perfect — for starters, they're not as diverse as they could be — but at least they do believe in facts.

People who watch Fox News and follow Trump aren’t all close minded racists. There are many hardcore racists out there, but they are probably outnumbered by confused people working with bad information. I know I keep meeting them in airport bars as I travel the country.

My last exchange came before the NBA playoffs. I was leaving Miami after covering a story on some brilliant kids from Baltimore who were competing in a tech competition. A few drinks floated around and I ended up talking basketball with an older white dude who said he needed a break from his wife, whom he left at the gate. He wasn't sporting a MAGA hat or a Fox News T-shirt, but he did give off a Republican vibe when he said, “I think LeBron is an outstanding player, but he’s a troublemaker.”

The conversation got really interesting when I asked him to explain.

“Well, for starters, all that mess with him leaving his hometown and going to the Heat.”

“He didn’t leave his hometown,” I laughed. “LeBron is from Akron, not Cleveland. He gave them a championship, and this is America. People should be able to work wherever they want, right?”

He paused. “I never looked at it like that.”

Then I brought up how LeBron is a family man, has never been caught up in any scandals, and gives a lot of kids hope. “Where’s the trouble?”

We continued joking and talking about sports. We disagreed on the idea that everyone needs to stand for the national anthem, took some shots at each other, and in the end I do believe he got chance see that some of his feelings were based on a exposure to a limited perspective — little to no interactions with black people, and too much more of the kind of racist poison that Trump uses to widen the divide in our nation.

I don’t think that guy left the airport and bought a Black Lives Matter hoodie, but he did get a chance to reevaluate his ideas and realize that other perspectives outside of his do exist — they just get lost in all of the readily available flawed messaging around him.

With Trump and his surrogates constantly spreading racist messages — that all minorities are criminals and stupid — it doesn’t matter if Trump only serves four years. At this rate, he’s laying the groundwork for a generation that will believe in his toxic rhetoric because it's the message to which they've been exposed. If we don't push back, we’ll need to make way for more Charlottesvilles, more police shootings, more divisiveness. We may even be opening the door to elect another Trump.