Trump adviser Stephen Miller has a plan to impede the status of millions of legal immigrants: report

The policy would make it more difficult for legal immigrants in the U.S. to gain citizenship or obtain green cards 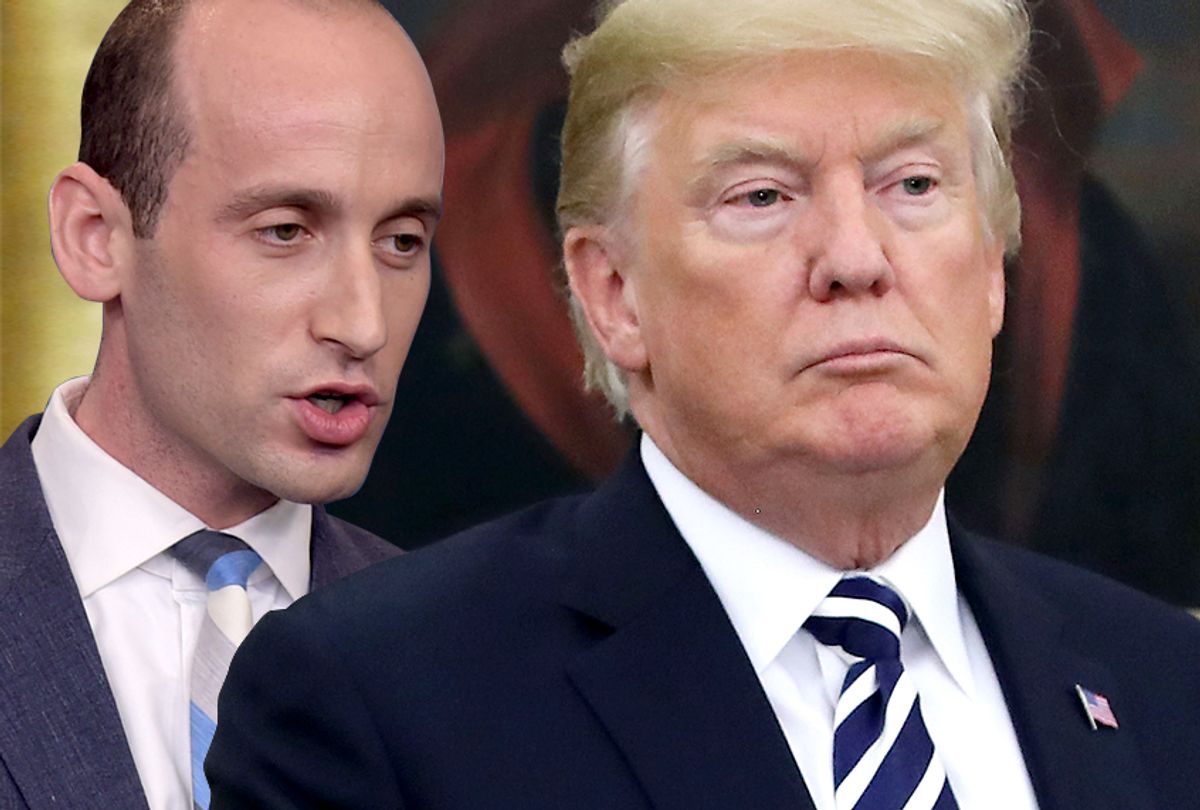 President Donald Trump's administration is reportedly planning to rubber stamp a new policy that would make it significantly more difficult for legal immigrants in the country to gain citizenship or obtain green cards.

The plan, which would not require authorization from Capitol Hill, could impede the status of legal immigrants who choose to access a number of public welfare programs available to them, according to an exclusive new report from NBC News. Those include "immigrants living legally in the U.S. who have ever used or whose household members have ever used Obamacare, children's health insurance, food stamps and other benefits," Julia Ainsley writes.

The mastermind behind the new immigration policy is reportedly Stephen Miller, who has been a Trump loyalist from the beginning and has developed a reputation as one of the White House's staunchest opponents of immigration. Just as the Trump administration's controversial family separation policy was widely attributed to Miller, so too is this policy believed to have been shaped by the senior White House adviser. On both occasions, Miller seemingly had the same goal in mind: to limit the number of immigrants entering the U.S., whether legal or not.

The news is also consistent with a report from Politico in June that Miller was meeting with a number of government officials in order to find ways to "use executive authority and under-the-radar rule changes" to affect immigration. The new policy is one of the measures that Miller was reportedly considering at the time. According to NBC News, it would be "the most significant change to legal immigration in decades" if enacted.

"There are two different aspects that I think are particularly important about this rule," David J. Bier, immigration policy analyst at the libertarian-leaning CATO Institute, told Salon. "One is: They're taking the definition of 'public charge,' and they're changing it from what it has historically meant. What 'public charge' has historically meant, all the way back to 1891 when it was first put into law, is two things. One: the receipt of significant benefits, significant support, from the government. And what this rule changes the definition to be is: If you use benefits in any amount greater than $1 per day for a single person or 50 cents per day for a family of four, you will be deemed a 'public charge,' a ward of the state, and will be excluded from receiving legal status in the United States. And that definition is totally discordant with the historic understanding of 'public charge' as someone who is receiving significant support from the government."

"Then, the second aspect of this historical understanding of 'public charge' is: Not only do you have to have received significant support from the government, you have to account for the inability of the immigrant to support themselves apart from that support," Bier continued. "So it took into account how much you are contributing and supporting yourself as part of the determination. That's why the current definition is: Are you primarily dependent on the government or not?"

The Trump administration, by contrast, is incorrectly arguing that they are merely enforcing the law as it currently exists — an argument reminiscent of their equally inaccurate claim that separating migrant children from their parents enforced existing laws.

"The administration is committed to enforcing existing immigration law, which is clearly intended to protect the American taxpayer by ensuring that foreign nationals seeking to enter or remain in the U.S are self-sufficient," a spokeswoman for the Department of Homeland Security said about the proposed policy. "Any proposed changes would ensure that the government takes the responsibility of being good stewards of taxpayer funds seriously and adjudicates immigration benefit requests in accordance with the law."

As Bier explained to Salon, however, "the definition of 'public charge' that they're trying to provide makes no fiscal sense for the country. You're excluding more contributors than you're excluding welfare queens under this definition."

If the financial logic of Trump's policies doesn't add up, however, there is a racist subtext that provides clarity in terms of why he and his administration are pursuing this anti-immigrant agenda.

"Like the racist Know-Nothings of the last century, Donald Trump’s immigration policies are guided by the belief that America is a small place whose promise of opportunity and dignity must be reserved for white Anglo-Saxon people," former Maryland Gov. Martin O'Malley, a Democratic presidential candidate from 2016 who has long supported progressive immigration policies, told Salon by email. "He has admitted as much when he openly asked why we can’t see more immigrants from places like Finland and less from places like Africa."

He added, "Trump’s immigration policies are — by intention and practice — racist, anti-Muslim, anti-Catholic, mean-spirited, and intentionally cruel to children and their refugee parents. His actions are the opposite of the values for which the Statue of Liberty stands. Trump’s immigration policies run decidedly counter to the longer historic movement of the United States toward greater inclusion, diversity, and compassion for all. Trump’s policies toward refugees and refugee children are a violation of the norms of human decency the world-over. His actions run contrary to one of the basic precepts of every major world religion — kindness to refugees and strangers."

Yet the U.S. Citizenship and Immigration Services is downplaying the magnitude of this policy change, which is expected to impact more than 20 million legal immigrants currently residing in the country.

"Contrary to open borders advocates, immigration attorneys and activists," agency spokesperson Michael Bars told NBC News. "USCIS has not changed the manner in which applications for naturalization have been adjudicated, as the law generally requires that an eligible applicant must have been properly admitted for permanent residence in order to become a U.S. citizen . . . We reject the false and inaccurate claims of those who would rather the U.S. turn a blind eye to cases of illegal immigration, fraud, human trafficking, gang activity and drug proliferation at the expense of public safety, the integrity of our laws and their faithful execution."

It is worth noting that, according to a draft of the policy document covered by Reuters in February, the government explicitly bases its argument on the distorted definition of "public charge" identified by Bier.

"Non-citizens who receive public benefits are not self-sufficient and are relying on the U.S. government and state and local entities for resources instead of their families, sponsors or private organizations. An alien’s receipt of public benefits comes at taxpayer expense and availability of public benefits may provide an incentive for aliens to immigrate to the United States," the document proclaimed at the time.

"It's like a merit-based point system, but the applicants don't get to know what the point values are and the bureaucrats get to make up the values as they go along," Bier told Salon. "And, so, it's just going to create total chaos for the legal immigration system and going to result in many people being excluded from the United States who are not even likely to use benefits at all."

Gov. O'Malley was even more scathing in his assessment of the ultimate consequences of Trump's policies.

"Ripping frightened children from their refugee parent’s arms at the border and sticking them in cages is contrary to the teachings of the Christian Gospel. It is behavior which is inhuman and cruel; it is behavior which is intentionally evil — designed to pander to the hates of a few by dehumanizing and scapegoating other human beings," O'Malley explained.

He added, "Sadly, the administrative execution of these policies is being supervised by Americans of Irish and Jewish heritage. May the souls of their grandparents forgive them."

On the racist double-standards that exist for immigrants.