Omarosa: President Donald Trump is "actually a racist" and has uttered the "N-word" and other slurs

"Using the N-word was not just the way he talks . . . it was how he thought of me and African Americans as a whole" 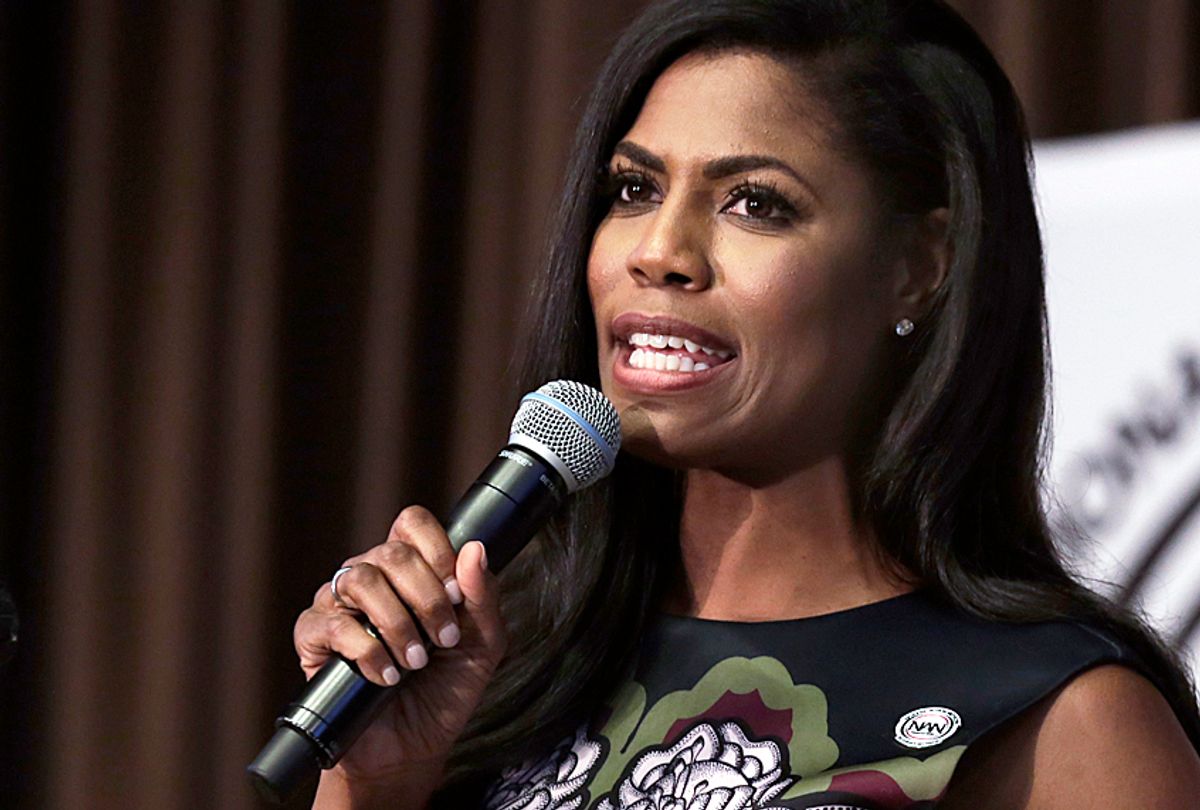 Omarosa Manigault-Newman, who was fired from her post as director of communications at the White House Office of Public Liaison last year, alleges in her upcoming tell-all that President Donald Trump is "actually a racist" and has uttered the "N-word" and other slurs.

The new allegations were first revealed by The Guardian, who obtained an advance copy of "Unhinged." In the memoir, the former "Apprentice" contestant insists that outtakes from the reality TV show, in which Trump can be heard using the N-word "multiple times," exist. However, The Guardian notes that Manigault-Newman "does not say she heard him use the word herself."

"Three sources in three separate conversations had described the contents of this tape," Manigault-Newman writes. "They all told me that President Trump hadn’t just dropped a single N-word bomb. He’d said it multiple times throughout the show’s taping during off-camera outtakes, particularly during the first season of 'The Apprentice.'"

The Guardian also writes that Manigault-Newman "personally witnessed Trump use racial epithets about the White House counselor Kellyanne Conway's husband George Conway, who is half Filipino."

The news arrives one day after The Daily Beast reported that Manigault-Newman secretly taped private conversations she had in the West Wing with her former boss. The reality TV star turned White House staffer clandestinely recorded her former boss on her smart phone, although it remains uncertain if any conversations captured on tape contain bombshells. The recordings were described to the outlet by multiple sources as "anodyne, everyday chatter."

The former star of "The Apprentice" is set to publish what has been described as an “explosive, jaw-dropping” account of her time inside the White House later this month — a memoir publisher Gallery Books purports will be a "must-read for any concerned citizen." In a page from her book, "Unhinged," which was obtained by The Daily Beast, Manigault-Newman details an attempted purge of "leakers" carried out by herself, then-communications director Anthony Scaramucci and Ivanka Trump, the president's eldest daughter.

Late last month, Trump's former personal attorney Michael Cohen released a secret recording of a 2016 conversation he had with Trump to CNN by way of his lawyer Lanny Davis. The dialogue indicates that Trump was aware of an attempt to quash a report about his alleged extramarital affair with former Playboy model Karen McDougal only weeks before Election Day.

TIME’s Ryan Beckwith was quick to point out on Twitter that, while Trump has accused former President Barack Obama and former FBI director James Comey of secretly recording private conversations him, the people who actually taped him were members of his own inner circle: Cohen and Manigault-Newman.

Manigault-Newman left her post as director of communications at the Office of Public Liaison in December after less than a year on the job. Fired by Chief of Staff John Kelly, she reportedly tried to protest the terms of her firing by marching to the White House residence. Following what was allegedly a dramatic exit, Manigault-Newman bounced back from reportedly being fired and escorted off of White House grounds with a much-hyped return to reality TV.

“It had finally sunk in that the person I’d thought I’d known so well for so long was actually a racist," she writes of her exit in "Unhinged." "Using the N-word was not just the way he talks but, more disturbing, it was how he thought of me and African Americans as a whole.”

During an appearance on the CBS series “Celebrity Big Brother,” Manigault-Newman began to share her unfiltered feelings about her brief stint working for President Trump — remarks that could foreshadow the text on the pages of her new book. “There’s a lot of people that want to stab me in the back – kind of similar to the White House,” she said on the broadcast. “The one thing I learned from politics is you have to learn how to watch your own back. And, in some cases, you have to watch your front, too.”

On the show, Manigault-Newman also claimed she was “haunted” by Trump’s tweets “every single day,” and described the situation inside the White House as “bad.” She also questioned the country’s leadership under Trump.

Most recently, the fired White House staffer alleged that she observed the “mental decline” of her former boss. The claim emerges in another excerpt of her upcoming book.

Manigault-Newman’s book could also detail her connection to Cohen. According to the Wall Street Journal, "Mr. Cohen mediated a dispute between Omarosa Manigault-Newman, who had been a star on Mr. Trump's 'Apprentice' reality TV show, and the Enquirer over a story about her brother's murder."

Trump has previously called Manigault-Newman "Honest Omarosa," claiming that "she won't backstab-she'll come at you from the front."