Why this Watergate anniversary says so much about Donald Trump

If Congress today had been as diligent as it was when Nixon was president, Trump would have resigned already 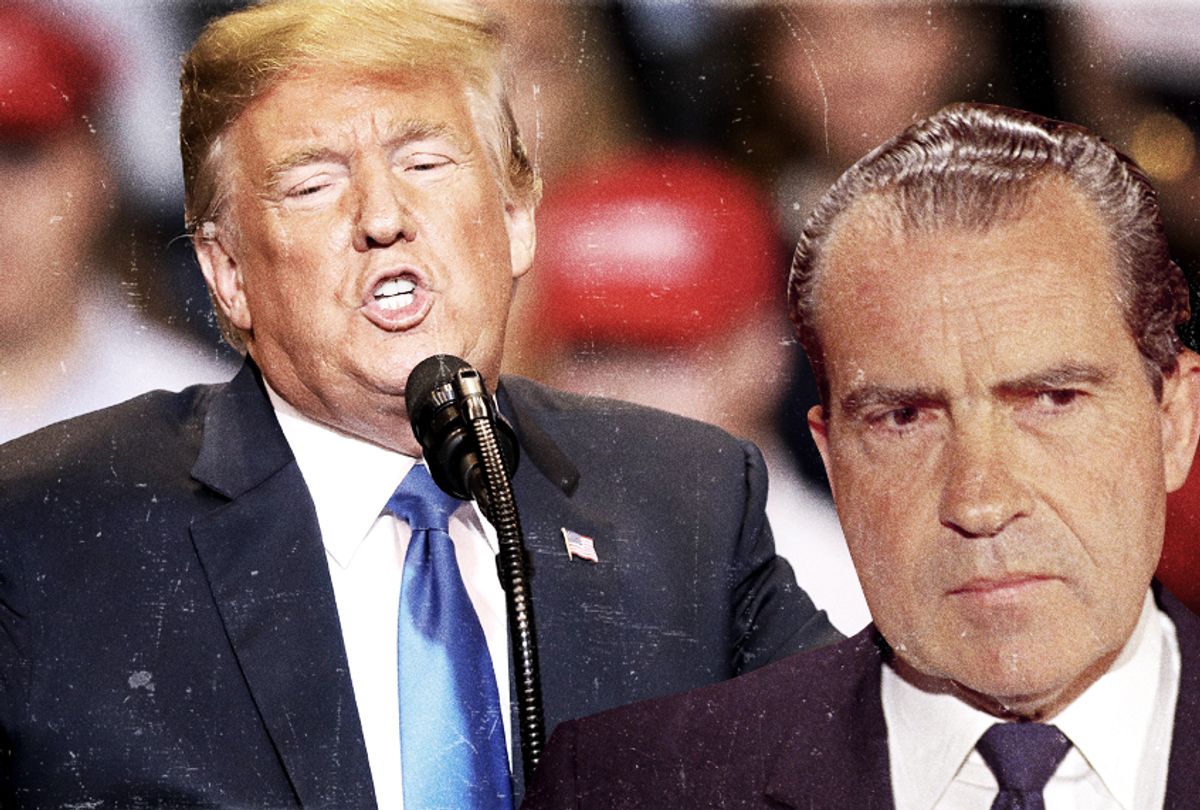 Thursday we quietly marked the 44th anniversary of Richard Nixon's resignation from the office of President of the United States.

Right now America is facing a presidential scandal that bears striking similarities to Watergate, the event that ultimately caused Nixon to leave office in disgrace. On both occasions, the scandal occurred because a Republican presidential candidate — Nixon in 1972 and Trump in 2016 — used trickery in the hope that doing so would reveal dirt that could undermine the campaign of their Democratic opponent. To the credit of the Democratic nominee from 1972, George McGovern, Nixon's snoops and scoundrels weren't able to find anything about him, forcing them to resort to distorting his progressive ideology; to the discredit of the Democratic nominee from 2016, Hillary Clinton, there was plenty of dirt to be had on her.

When it comes to the misdeeds committed by the Republican candidates, however, those comparisons between McGovern and Clinton are tangential. It is just as wrong to break into the political offices (Watergate) or email accounts (Trump-Russia scandal) of someone who has done shady things as it is to do it to someone whose record is squeaky clean. This must be noted because one of the current tactics being used by Trump's defenders is to argue that the act of potential collusion matters less than anything which might have been uncovered about Clinton. From both a legal and ethical standpoint, this is simply not the case.

By this time in Nixon's presidency, the sins of how he was elected to his then-current term had finished catching up with him. He was already reckoning with near-certain impeachment and, to avoid dragging the nation through that trauma and himself through further anguish, he resigned. Soon Nixon's successor, President Gerald Ford, was able to tell the nation that "our long national nightmare is over." The exact same period of time has elapsed between Nixon's second inauguration (the one after the 1972 election) and his resignation that has transpired from Trump's inauguration and the present day.

And yet Trump is not only still in office. The prospect that he would be impeached, even if he was guilty, is at best remote.

The reason why Trump is likely to get away with any misdeeds he committed is identical to why Nixon was ultimately held accountable for his own transgressions — we live in a hyper-partisan society. Although Nixon won by a landslide in 1972, Democrats remained in control of Congress, and as a result, it would have been easy for them to muster up enough votes between their own members and dissident Republicans to forcibly remove Nixon from office if he didn't resign.

By contrast, Republicans have made it clear that they have no desire to hold Trump accountable regardless of whether he did anything wrong. The last part of that sentence — "regardless of whether he did anything wrong" — is absolutely critical here. Hypothetically speaking, it could wind up being that Trump didn't break the law and doesn't deserve to be impeached. That said, Republicans in Congress have allowed blatantly biased members to control key investigations into the accusations against Trump, refused to pass legislation protecting special counsel Robert Mueller from being fired and have in general slow-walked any meaningful effort to look into whether Trump acted inappropriately with Russia. If Trump is guilty of breaking the law, this Congress would happily choose not knowing about it over doing the right thing.

The midterm elections are unlikely to change the dynamic either. Even if Democrats overperform to an unprecedented degree, it will be impossible for them to obtain 67 seats in the United States Senate — and that's the minimum they would have to reach in order to be able to remove Trump from office if the House should choose to impeach him. The situation in the House, by the way, is hardly a sure thing for the Democrats either. While it is likely that they will make gains, Republican gerrymandering has made it extremely difficult for Democrats to actually win enough seats in order to take the majority from the Republicans. If the gerrymandered districts do their job and keep Democrats out of control of that body, then even being able to flip the Senate will achieve nothing.

There is an additional fact to consider as well: The possibility that, if Democrats were somehow in a position to impeach Trump, they would not want to do so.

Say what you will about Trump, but he has proved to be a galvanizing force for the Democratic Party, one that brings voters to the polls in ways that a blander Republican might not. Vice President Mike Pence, though possessing some of the most noxiously intolerant views on matters like LGBT rights of any Republican out there, is generally regarded as a milquetoast personality. If he ascends to the presidency, it may be more difficult to rally Democrats against him than it is to do so against the bombastic, bullying Trump. Even more troubling, Pence could benefit from public goodwill — Americans as a rule try to give presidents who reach power under traumatizing circumstances some kind of honeymoon period — and that might be enough to reelect him in 2020. After that, he could run for another term in 2024, leaving Americans with the daunting prospect of a decade under President Pence.

These are all factors to take into consideration as we reflect on the anniversary of the only other time a president resigned in disgrace. The tragedy is that each consideration just listed is a strictly political one, from the partisan self-interestedness of Republicans to the strategizing of the Democrats. Irrelevant, it seems, is the question of whether Trump actually colluded with a hostile foreign power in order to steal documents about his opponents in order to win a presidential election.