Issa Rae's acclaimed comedy, a view of Iran and a quality reality series are joined by a new show by Matt Groening 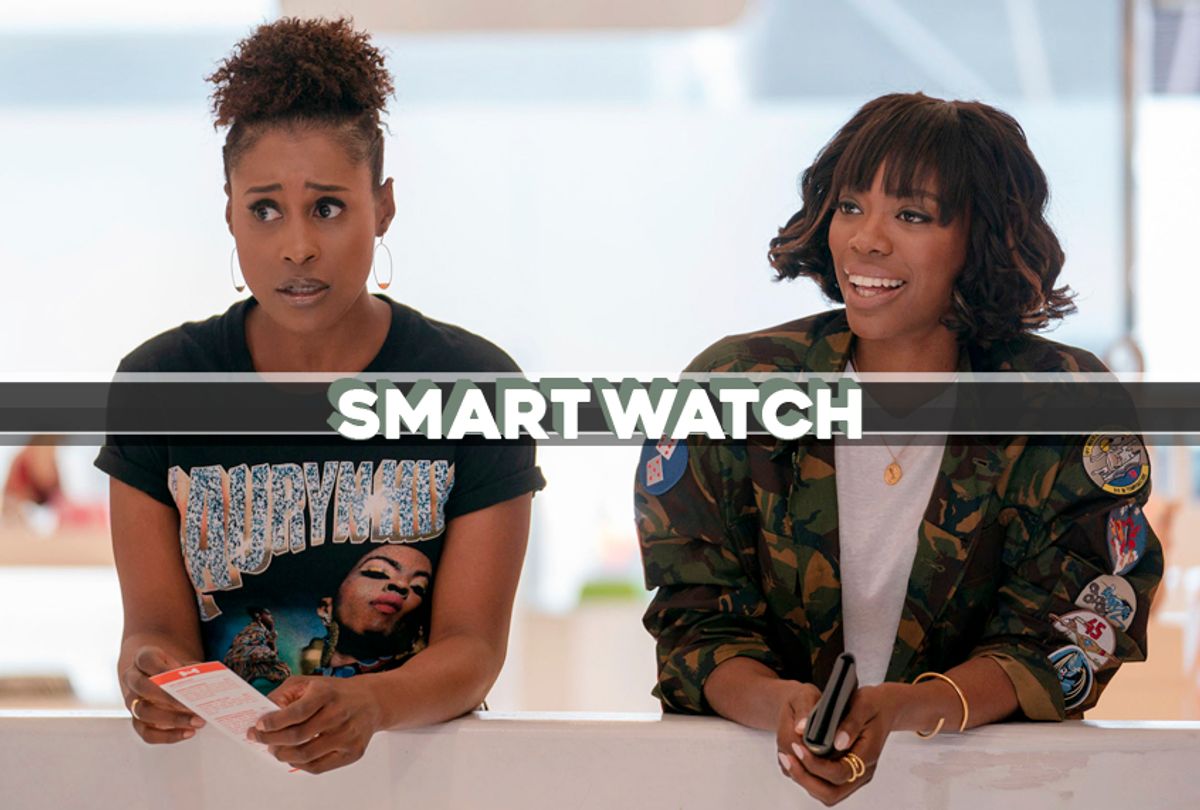 We have expectation of our old friends. That’s their fault, by the way — they make the mistake stepping up in times of need, being loyalty and engendering a sense of trustworthiness. They let us know they’ll be there for us, regardless of the obstacles life puts in the way. The Rembrandts did an entire song based on that theme which, in turn, became the theme for “Friends.”

“Insecure,” returning to HBO for a third season Sunday at 10:30 p.m., carries with it the same level of expectation we have for the people worthy of our affection because the series is just short of perfect. Actually, this is underselling what a consistently entertaining and emotionally illuminating show this is. Creator/star Issa Rae and her writers make every note of the series feel warm, fresh and lovely, even when life decides becomes decidedly bumpier for Issa and her best friend Molly (Yvonne Orji).

These women don’t mope, they keep pushing through the bad patches and handle their business, because what other choice do they have? But this new chapter in Issa’s life really puts this to the test: we meet her while she’s living that line from that other sitcom referenced above. Her job actually is a joke, she’s broke, and her love life’s D.O.A. (Don’t clap.)

Having ended her relationship with Lawrence, Issa finds herself on the couch of an old friend who never quite made it to boyfriend territory, Daniel (Y’lan Noel). At her ridiculous job with We Got Y’all, a social services agency focused on providing after-school assistance to at-risk kids, her boss has sidelined her and refuses to accept her valuable input or acknowledge Issa’s attempts to go the extra mile.

Rent in her neighborhood has gotten so expensive that Issa is driving for Lyft to make ends meet, a side gig that can be uncertain and dangerous.

“Insecure,” one of the few half-hours on television created by a woman of color, lithely tells stories that feel vital and current without sacrificing the storyline’s flow to make its point. Issa’s and Molly’s conundrums are ones that all women deal with; the first couple of episodes in particular demonstrate how frustrating and potentially dangerous it can be when a woman’s desire isn’t taken seriously.

But the story’s primary wellspring of tension, initially, has Issa and Daniel as its source. Jay Ellis, the actor that plays Lawrence, is not in season 3, news that broke the hearts of a number of fans. They need only to watch the first few episodes to get why this makes sense, given this season’s focus on Issa reaching a crossroads in her life.

We get their mourning, though. A moving, heartbreaking sequence from the season 2 finale shows a fantasy of Issa meeting Lawrence at the door as he’s moving out, presented as a seamless transition out of reality, as the show often does. They reconcile, fall back into their old habit and blissfully become pregnant.

Suddenly we’re jerked back to that threshold between what could be and what is, and we see that Lawrence is moving on. Issa will have to, as well. The typical comedy would let us know that Issa and Lawrence are on a break, that maybe he really is her forever. Thank god “Insecure” is as far from a typical comedy as one could imagine.

The soft magic of “Insecure” nestles within this dialogue, between who Issa is versus who she wants to be, shown mostly in her conversations with her ideal self, her “mirror bitch.” Past episodes often show this reflected version of Issa as brash and comedic; in this new season the lady in the mirror is just glad they’re still on speaking terms, even if barely. Issa is having problems checking in with her inner voice.

And in these new episodes, Rae maintains her character’s doe-eyed vulnerability and playful humor, even in the passages where it’s obvious she’s frustrated, hurt and lost. Daniel does not replace Lawrence, so you can place that concern in the drawer right now. Instead, he’s presented as an example of a go-to option that would make it simpler for Issa to remain in her current limbo as opposed to moving on to the next part of her life.

Orji remains as ebullient as ever, making Molly the kind of friend who supports Issa without enabling her baser inclinations. This maybe the most endearing element of their friendship, actually. And, of course,  their assorted partners in crime come through to play truth-teller and, occasionally, fire starter.

Together Issa and Molly make enough mistakes to keep “Insecure” spicy, fun and refreshingly real. And like the finest old friends, it’s back on HBO right when we need it.

“Frontline: Our Man in Tehran,” Monday and Tuesday at 9 p.m. on PBS.

Whenever political tensions flare between Iran and Western countries, pundits enjoy reminding their viewers what a hellhole they think the country is. And every few years we receive some kind of travelogue, delivered via newsmagazine or by entertainment outfits such as “The Daily Show,” that blow apart those cemented notions about the place and show the warmth and kind character of the Persian people.

Reported by Thomas Erdbrink, airing over two nights, "Our Man in Tehran" may be one of the most comprehensive looks at the dichotomy of living in a country governed by a combination of civil law and Koranic guidelines. Erdbrink, a chief correspondent for the New York Times, has been living inside Iran for nearly two decades. He produced the documentary over the course of four years, with the government’s permission.

Over the course of its four hours, Erdbrink explores Iran through the variety of views and passions of its people, creating a portrait of a culture teetering on a precipice between a youth-dominated society eager to openly embrace modern ways and conservative clerics clamping down on freedoms in the name of adhering to Islamic traditions.

A fresh level of understanding of places in the world most of us will never go to or see first-hand is necessary in times that insult honest dialogue and fact. If you believe in this idea, this Frontline should not be skipped.

Generally speaking I’m no great fan of what’s referred to by the Emmy Awards as “unstructured” reality, those series that follow a chose family or group of people and place them in situations just to see how they act with or react to one another.

This series, in contrast, uses the format as a service. Bunim/Murray Productions, the originators of MTV’s “Real World” format, follows a group of men and women with Down syndrome as they embrace various levels of independence. This new season contains a number of reality show tropes, foremost among them being a season-long plan for a major event – this one being the wedding of a major character. At the same time such adventures most of us take for granted, such as getting a driver’s license, entering into a relationship or moving out on one’s own, are depicted with the extra level of care and vulnerability these milestones merit.

These leaps are uncertain for everyone, and such uncertainty creates drama. Only here, the drama isn’t instigated or exacerbated by producers goading participants into conflict. It’s a natural part of these men and women asserting themselves with agency, shattering expectations and bumping up against obstacles in their striving. There’s a kind of joy in this series that one simply doesn’t experience elsewhere. Not surprisingly, it’s also Emmy nominated once again, and deservedly so.

Speaking of expectations, Matt Groening’s new series arrives with a boatload of them. What can we say — when you create a wildly successful pop culture phenomenon (“The Simpsons”) and a cult hit beloved enough to resurrect for several seasons on Comedy Central after its original network home cancelled it (“Futurama”), people get excited.

The voice cast of Groening’s fractured fairy tale also is stellar, including Eric Andre as demonic sidekick Luci, Nat Faxon playing a misbehaving elf named “Elfo,” and “Broad City” star Abbi Jacobson as Princess Bean, who would rather be a warrior than a gentle lady. Denizens of the crumbling medieval kingdom of Dreamland, the three band together to roam the land and have adventures while running from Bean’s selfish father, a patriarchal king seeking to marry her off to secure an alliance.

Alas, though the heart of “Disenchantment” is in the right place, its episodes feel overly long and thin on pep. Provided you’re up for a lesson, however, “Disenchantment” proves the value of network editing, especially on a service that quite regularly demonstrates that it is in desperate need of quality control.

On the flipside, although “Disenchantment” is slower than “The Simpsons,” it’s also a lot darker than Groening’s other series in a very good way. Who knows, Dreamland may be your new paradise. For everyone else, to quote Bart Simpson, although it's worth checking out, this show is just kinda “meh.”

Since we’re in a cartoon mood — what can I say, it’s late August, work with me here!  — can we just call out that a quality children’s television series is rare and wonderful?

“Esme & Roy,” the first animated series Sesame Workshop has produced (in partnership with Nelvana) in more than a decade, presents a part of babysitters, a young girl and her shaggier horned counterpart, who create constructive solutions to help the young monsters they’re watching avert meltdowns.

They’re adorable solutions-driven segments that clock in at under 15 minutes, but they’re also legitimately entertaining, and might even help keep a few child care providers from losing their minds. Can these characters become your kid’s new best friends? I have no idea.  But it’s better than Barney the dinosaur, and honestly, that’s good enough.