The real Ron Stallworth, whose book was adapted to Spike Lee's "BlacKkKlansman," speaks on the KKK and Donald Trump 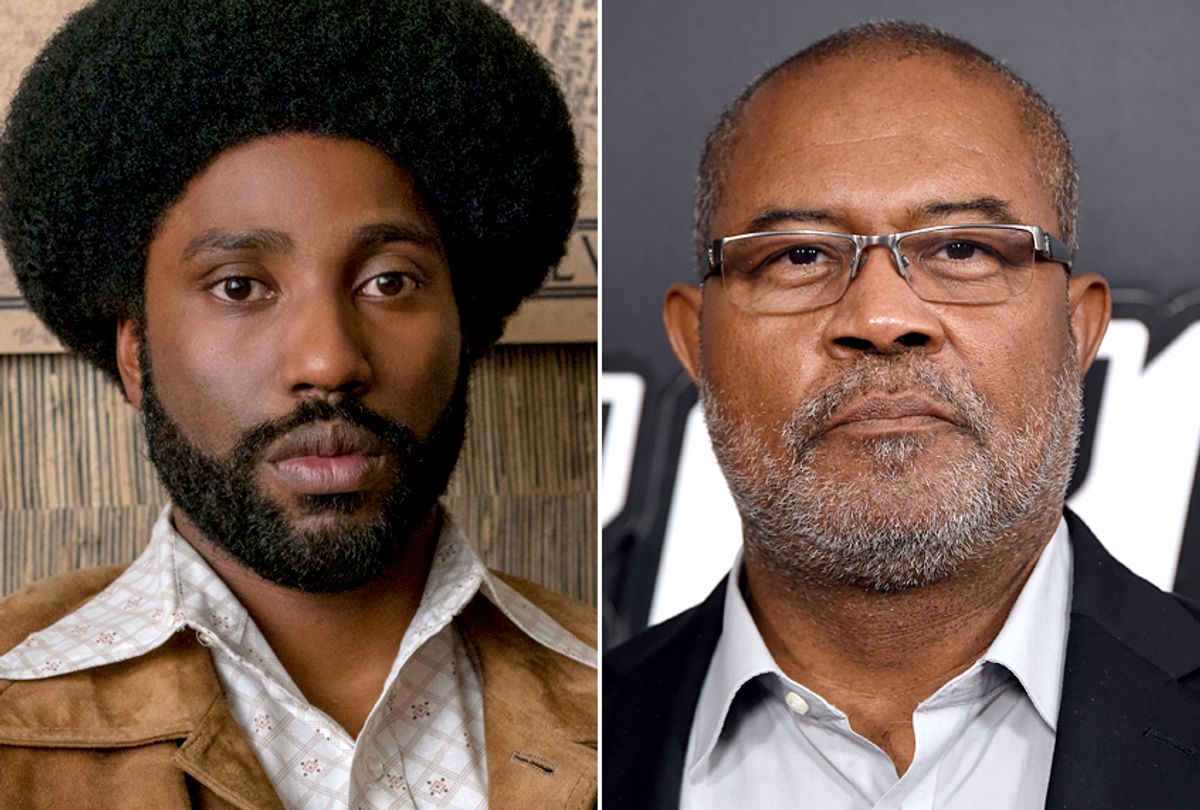 The real life story of Ron Stallworth, the first black detective to join the Colorado Springs Police Department, who infiltrated the Ku Klux Klan in the 1970s, has been launched into the national spotlight via the Spike Lee-directed feature film "BlacKkKlansman." In the film, Lee remixes the usual "Based on a true story" disclaimer that usually precedes such films, saying instead the movie is "based on some fo' real, fo' real shit."

But before Lee resurrected Stallworth's story for the big screen, Stallworth wrote it all down in a memoir, "Black Klansman," first published in 2014. New editions of the book have skyrocketed the memoir to the top of bestseller lists.

Like the film, it's a story that is both historical and devastatingly relevant, especially as the country recognizes the one-year anniversary of the white supremacist rallies and violence in Charlottesville.

I spoke with Stallworth by phone last week about the film, his story and racism in America in 2018.

How does it feel to have your story on the big screen?

It's a very surreal moment for me and my wife to sit in the theatre and hear the words that I wrote, four years or so ago, come out of the mouths of the actors, to hear them voicing my name repeatedly throughout the film. This is something that no one ever imagines happening, and here I am in this moment. My wife and I are — we occasionally pinch each other saying, "Can you believe this?"

Did you think Spike Lee did a good job?

No. He did a masterful job. Spike is a master at his craft, and I think it all comes out in this movie. "Malcolm X" is my favorite Spike Lee movie. In my opinion, this one is comparable to "Malcolm," and ultimately it will surpass "Malcolm" when award season comes around, because Spike did a wonderful job capturing my story.

I think Spike Lee is a national cultural treasure to not only the black community, but he should be recognized also by the white community. He is a true master of his art.

How involved were you in the film?

My only involvement occurred during the cast read-through. Spike brought me and my wife to his 40 Acres offices and asked me to address the actors. I told him my story firsthand. They had some questions and we answered the questions and that was it. I got calls and texts periodically from John David Washington [who played Stallworth in 'BlacKkKlansman'], twice maybe, and one time Adam Driver [who played Flip Zimmerman] called. Beyond that, I had no involvement in the creation of the movie.

The storyline was that when you infiltrated the Ku Klux Klan, they were in an image-control stage. Can you talk about how they attempted to sanitize and mainstream their image and why?

Well, one of the things that David Duke was known for [is] he never wore his Klan robes in public. He always appeared in nice tailored suits, a very polished individual with the media. He knew how to speak very well. He had a master's degree in political science from Louisiana State University, and he knew how to present himself and his cause very well, to make it appealing to the mainstream. A lot of what Donald Trump did to capture the White House, David Duke was trying to do but in a more polished manner. Donald Trump is the physical embodiment of what David Duke wanted to achieve and failed.

Another thing that they did, David Duke never used the N-word. He used it all the time when I had conversations with him on the phone, but he didn’t use it in public. That was in keeping with his image change of the Klan. He was also advocating that his members go and register to vote so that they can change things for their cause [at] the ballot box. He and his people even invoked the name of Dr. King as an example of what they should do to make the Klan a political organization.

They were trying to change their image, and part of changing their image was to gain control of elective offices at various levels. Like Dr. King, the only way you do that is register people who have like-minded views to get to vote.

David Duke really liked you or who he thought you were. What was it like, communicating with someone like Duke so regularly?

Well, first of all, I can't say that David Duke liked me as the picture depicts. David Duke and I, we had conversations on the phone; he was very pleasant to talk to on the phone until the subject of race came up, and then Dr. Jekyll became Mr. Hyde and the monster in him was unleashed.

Is it true that he called you recently?

He called me last Sunday, yeah.

He's concerned about how he will be portrayed in this movie — his image. He was basing all this on the trailers he had seen. He said he hasn’t said some of the things that were depicted in the trailer, and he said he had never used the N-word and I reminded him that, "Yeah, you did. You and I talked about it back and forth." Then he kind of pivoted. He said, "Well, black rappers use the N-word all the time." We were not talking about black rappers. Every time I would corner him on something, he would pivot to another topic.

He said he was not a racist or a white supremacist. I reminded him of some of his past statements and the very fact that he endorsed Donald Trump, who is a racist, and he thought Donald Trump was not racist, but rather was a supporter of maintaining the white cultural heritage. I told him that there is no such thing as white cultural heritage in America. We are a multicultural diverse society.

How did he get your number?

I'm not going to tell you how, but it wasn’t hard and it didn’t surprise me that he called.

OK. As you talked about, Spike Lee does a really excellent job showing the lineage of Donald Trump's rise to the Ku Klux Klan, especially the more politically motivated organization that you infiltrated. Did David Duke really communicate to you that he imagined the image re-branding would eventually lead to a Klan-backed president?

No, that was never said. David Duke was trying to just get himself elected or he was moving in that direction.

In the '70s, did you ever imagine that the United States would see the victory of someone like Trump?

Let's face it. Nobody predicted Trump. He's a fairytale nightmare that none of us could possibly have imagined. Shame on those 63 million who — especially those Obama voters who crossed over and voted, shame on them for putting this idiot in the White House. We have a reality show governance that is taking place and it's just disgraceful.

In the film, it's so intense seeing all the parallels between what David Duke was saying, what the Klan was doing and Trump, what he's saying today, and seeing the Charlottesville footage. Spike Lee really forces us to look in the mirror.

Yeah, Spike did an excellent job portraying all of that, visually connecting the historical thread from the Confederacy to "Birth of a Nation," to the White Citizens' Council, in the presence of Alec Baldwin [who plays Dr. Kennebrew Beauregard, a white supremacist who delivers a chilling opening monologue], to David Duke, to Charlottesville, and then to Donald Trump and back to David Duke again at the end, and that footage from Charlottesville. It was masterful how he worked that historical thread.

I talk about it a little bit in my book, but Spike really gave it life.

Another parallel that Spike did a really good job showing was instances of police brutality, then and now. In the film, your relationship with Patrice, the president of the Colorado Springs Black Student Union, was a really interesting dynamic. Was that part of your story as well?

In the film, it shows you navigating tension between black liberation and activism and policing. I was wondering if that's something that you experienced or if you ever shared any of Patrice's doubts about the police as an institution?

Back in those days, we didn't have the incidents of police brutality in common places as they have now. At least in Colorado Springs, we didn't. Those events were happening, where cops were beating up on people and shooting them indiscriminately, [but] our department was not like that to a great extent. We had a cop or two that were questionable, and probably they shouldn’t have been on the job, but they were. You have that, a police department reflects the community that it serves, and it's going to have a bad apple or two; but when those bad apples are discovered, they need to be discarded as quickly as possible so the whole bureau doesn't rot.

I wasn't actively doing anything back then. I was just doing my basic job, but since then, I have lost friends in the police profession because I'm willing to stand up and basically call out those who are wrong and need to be dealt with vigorously in the criminal justice system. Some of my police friends, my colleagues, don't like the fact that I am so vocal about it, but I will not stand silent when I see an obvious wrong being done towards minority citizens. We took an oath to uphold the constitution and we should live up to that oath.

Matthew Horace, a retired law enforcement officer, discusses police racism from the inside.