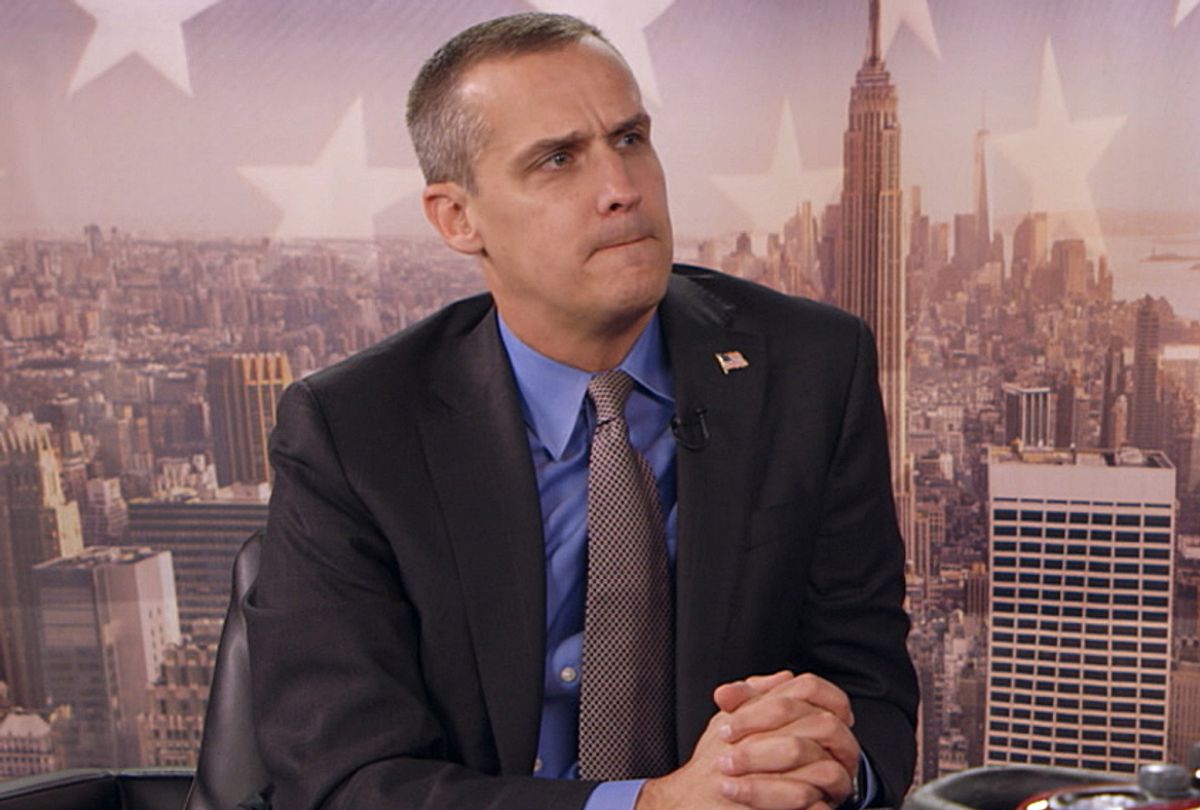 Corey Lewandowski on "Who Is America?" (Showtime)
--

In a recent segment of his show "Who Is America?" Cohen plays the character of Billy Wayne Ruddick Jr., a scooter-bound right-wing conspiracy theorist clearly intended as a parody of Alex Jones — or, perhaps more precisely, the kind of person who watches Alex Jones and wishes they had their own show like his. During the segment, Cohen dons a blonde wig, blonde mutton chops, a big blonde walrus mustache, wears a brown leather jacket and faded blue jeans and puts on his best stereotypical Red State accent.

"He was the campaign manager for President Donald J. Trump," Cohen-as-Ruddick tells the camera. "I want to say in Charlottesville, where people attacked our president, why should the president pick a side between antifascists and fascists? He's the president of all our people."

"There is a place and a time to disagree with people everywhere, okay?" Lewandowski proclaimed in high dudgeon. "You don't have to agree with people, but you have to respect them. You can't be attacking them."

Cohen agreed, proclaiming that "you can't be attacking honest, fascist people who just want to express their right to start a genocide. That is their right!"

Lewandowski responded to Cohen's remarks by saying, "Look, I don’t know about that, but what I do know is this: If the law says that people can do a peaceful protest, then they should be allowed to do that," according to Esquire.

Not everyone thought Cohen came across as better in his exchange with Lewandowski. Los Angeles Times critic Michael Hiltzik tweeted on Sunday, "It must be said, following tonight's 'Who is America': When Sacha Baron Cohen's marks--Corey Lewandowski and Sheriff David Clarke tonight-- fail to take his bait, the show falls completely flat."

Hiltzik's thoughts were echoed by The New York Post, which ran the triumphant headline "Corey Lewandowski doesn't take Sacha Baron Cohen's bait." The article argued that "President Trump’s former campaign manager joined the 'Who Is America?' hit list on Sunday, but unlike his predecessors, was able to keep his cool throughout the entire appearance." It pointed to his refusal to buy into Cohen's claim that there was a "Rastafarian lobby" that owns PBS as well as his willingness to stand up for Trump when the president is attacked for being a racist.

Asked flat-out whether he thought the president was racist — or “the least racist man alive” — his former campaign manager said: “I had the privilege of standing and sitting next to candidate Trump — and now the president — for thousands of hours over my tenure running his campaign. Never, ever, ever did I ever hear him utter a racist word in his life. Ever.”

Cohen jokingly fired back, “If he was a racist, why would he move into a black man’s house?”

“That’s the people’s house,” Lewandowski said. “The president doesn’t look at race — never has. It’s a non-issue to him.”

What these defenses ignore, of course, is the fact that Lewandowski made two misstatements, one a factual error and the other a moral one. The factual error was when he lumped the violent fascist demonstrations with the peaceful counterprotests in Charlottesville by saying, "If the law says that people can do a peaceful protest, then they should be allowed to do that."

The moral error was when he responded to Cohen's conflation of antifascists with fascists by saying that it's wrong to "attack" people because of their beliefs.

"You don't have to agree with people, but you have to respect them. You can't be attacking them," Lewandowski told Cohen.

It is indeed a faux pas, regardless of what Lewandowski's defenders in the press may claim, to act as if there is no meaningful difference between the disagreements a fascist might have with his opponents and the disagreements held by someone with a different political persuasion. Fascism has been removed from mainstream political discourse for a reason, and Lewandowski's statement does the same thing that Trump's defense of the "alt-right" at Charlottesville accomplished — it normalized that which must remain at the fringes.

Then again, it does make sense why conservative-leaning media outlets like The New York Post have been eager to defend Lewandowski (as well as Milwaukee Sheriff David Clarke, who was also interviewed by Cohen in the most recent episode). Cohen has been able to snag some major GOP players in recent episodes, prompting outrage among conservatives who support those same figures.

In July, for instance, former Republican vice presidential candidate Sarah Palin admitted on Facebook that Cohen had gotten her, writing "Yup - we were duped. Ya’ got me, Sacha. Feel better now? I join a long list of American public personalities who have fallen victim to the evil, exploitive, sick 'humor' of the British 'comedian' Sacha Baron Cohen, enabled and sponsored by CBS/Showtime."

Cohen also pulled off a particularly legendary prank on Roy Moore, the former Alabama Senate candidate who has faced multiple accusations of engaging in sexual misconduct with underage girls. During that prank, Cohen told Moore that he was holding a device which could detect sexual deviants and other perverts, then had the device go off whenever he ran it in Moore's direction. Moore eventually became angry at Cohen and ended the interview.

In addition to those stunts, Cohen also tricked a Republican state legislator named Jason Spencer into exposing his bare posterior and using racial slurs against Chinese and African-American individuals and managed to get notorious Maricopa County Sheriff Joe Arpaio to say that he would accept oral sex from President Donald Trump, who pardoned him last year. More episodes of "Who Is America?" have yet to be aired, so it's unclear if Cohen nabbed any further GOP major players in his show.