Donald Trump and Richard Nixon: Many parallels, but they don't go far enough

Forty-four years after a Republican president resigned in disgrace, are we headed for the same conclusion? (No) 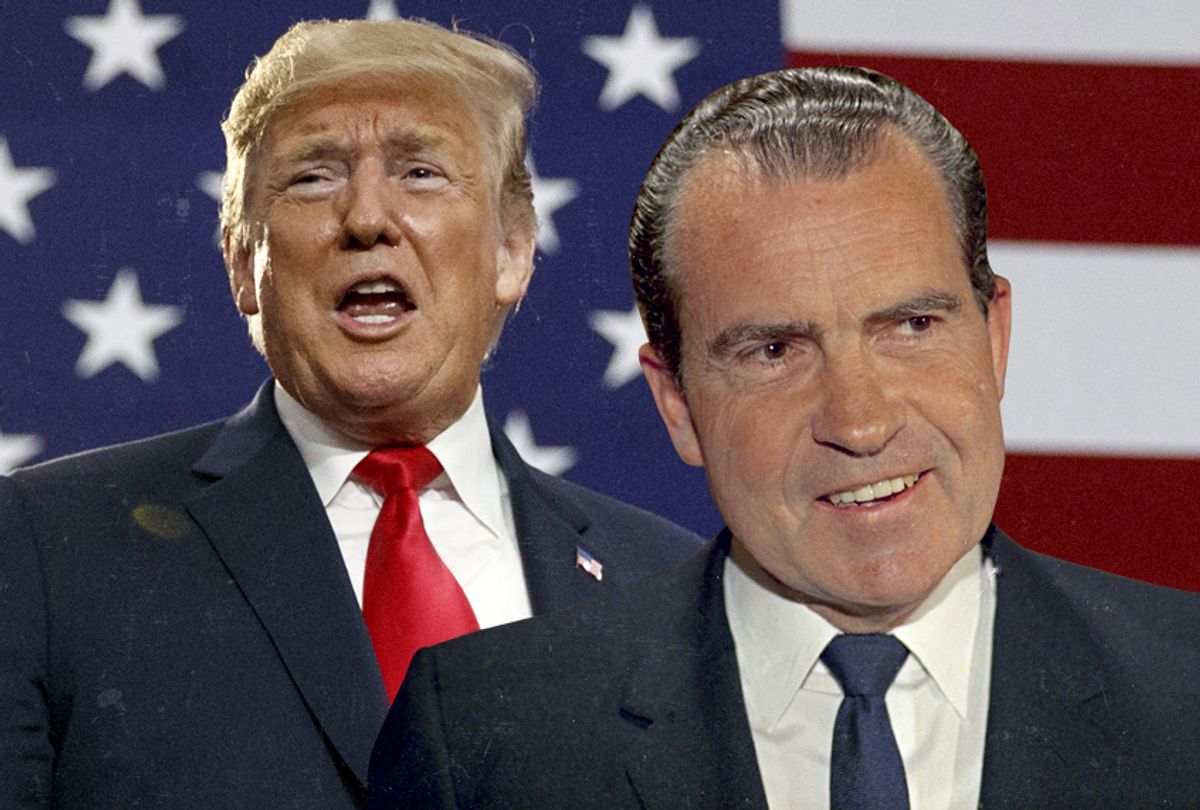 On Sunday, Aug. 5, President Donald Trump began his morning as he begins so many others, by logging onto Twitter. At 7:38 a.m. he struck out against the media, again calling them “dangerous” and bizarrely claiming they could start wars. Then his attention shifted to tariffs and the many trade wars he’s currently waging. By 8:35, however, he had moved on to the Russian collusion investigation, a target he repeatedly called a witch hunt, but not before delivering an incredible revelation.

"Fake news reporting," he wrote, "a complete fabrication, that I am concerned about the meeting my wonderful son, Donald, had in Trump Tower. This was a meeting to get information on an opponent, totally legal and done all the time in politics – and it went nowhere. I did not know about it!"

The tweet, a reference to the now-infamous June 2016 Trump Tower meeting between campaign members and Russian operatives, is a vexing thing to translate. If that meeting was above board and legal, as Trump suggests, then why, by the end of the tweet, is he so adamant that he was ignorant about it happening in the first place?

As with so much of this entire saga, the answers are few and far between. Since it was revealed in July of 2017 that Donald Trump Jr., campaign chief Paul Manafort and Trump son-in-law Jared Kushner had met the previous summer with a pair of Russian nationals with ties to the Kremlin, the story has repeatedly changed as journalists have uncovered the surrounding facts.

On July 8th, 2017, after The New York Times broke news of the meeting, Donald Trump Jr. released a statement claiming the meeting was in reference to Russian adoptions, a statement that President Trump’s lawyer Jay Sekulow initially claimed the president had not been involved in drafting. Quickly, that assertion changed when it was revealed that Trump had approved the statement -- and later that the president had actually dictated the statement himself.

Many have described this continually changing story as “moving the goalposts" or as an effort for Trump and company to stand their ground until damaging evidence forces them to change their story and take a new stand. This has been evident throughout the Russia scandal as Trump and associates have gone from claiming there was no contact with Russian nationals to admitting contact here and there until investigations have shown multiple meetings.

The charge of collusion has been handled in much the same way. Trump and his representatives have long claimed there was "no collusion," a phrase the president has tweeted over and over again. But in recent months, in an effort spearheaded by Rudy Giuliani, who is currently serving as counsel for Trump, the new maneuver is to claim that even if there was some form of collusion it wasn’t a crime. Trump has employed the tactic himself, tweeting last month that collusion isn’t illegal “but it doesn’t matter because there was No Collusion.”

We appear to be heading into a fractious and unpleasant battle that will be waged on political, legal and, oddly enough, semantic grounds. As Special Counsel Robert Mueller continues to build a potential case against Trump, it’s hard to imagine any scenario where the country isn’t going to be drawn into a long and grueling constitutional crisis that could see all of our norms, laws and safeguards pushed to their limits.

We’ve been there before.

In 1999, President Bill Clinton was impeached for high crimes of perjury and obstruction of justice. Though the House voted for impeachment, Clinton's trial in the Senate ended in acquittal. (Senators split along party lines, with 50 of the 55 Republicans voting to remove Clinton from office. A two-thirds majority, or 67 votes, is required for conviction.) President Richard Nixon faced a similar fate but resigned before he could be impeached or tried. He would likely have been the only president ever convicted and removed from office.

The days leading up to Nixon’s resignation were a surreal mixture of personal drama and mental breakdowns. They were fraught with deliberations and much handwringing by the president, his family and his staff. What finally sealed the deal and kept the country from crisis was an intervention by Republican leadership -- led by Sen. Barry Goldwater of Arizona, a venerated leader of the conservative movement -- who made it clear they could not support the embattled president as his case grew worse by the day. It was this intercession that finally convinced Nixon to resign and save the country from certain upheaval.

Such an intervention isn’t likely to be repeated, even as we need it more than ever.

Comparisons between Donald Trump and Richard Nixon are inevitable.

Both grew up with inferiority complexes so large that only their list of enemies and grudges could dwarf them.

Both have been accused by confidants and those around them as being rather uninformed when it comes to their presidencies and being possessed of combustible tempers that their subordinates have had to manage on a nearly daily basis.

Both were plagued by scandal -- and continue to be, in Trump's case -- ever since they entered the political fray.

Nixon showed a penchant for escaping the consequences of his actions, and in this way he also looks similar to Trump. But it was ultimately the Watergate scandal that brought his administration to its knees. It began on June 17, 1972, as five men were arrested breaking into the Democratic National Committee offices in the Watergate Hotel, and unraveled as the incompetent burglars were eventually traced back to Nixon’s orbit.

What resulted was a bungling mess that saw the 37th president attempt to cover up his association with the so-called “plumbers” who carried out the operation. The money trail, however, led directly back to Nixon’s campaign. As reporters and investigators made the connections, Nixon ordered one futile conspiracy after another, including an attempt to get the CIA to block the FBI from continuing their investigation.

In February of 1973, the Senate voted 77-0 to form a committee to investigate Watergate, a bipartisan decision that would seal the president’s fate. During questioning for that committee, it was discovered that the White House employed a taping system that would eventually prove to be the smoking gun that brought the presidency down. Until the Supreme Court voted 8-0 that the president would have to hand over the tapes to investigators, Nixon continually fought requests and even delivered evidence that had clearly been tampered with, including an infamous recording with 18 and a half minutes erased.

There was no shortage of moving goalposts in this scandal. Until it was shown otherwise, Nixon denied any involvement or knowledge regarding the crime. Then, when evidence showed that to be a lie, Nixon and his administration claimed he had known about the plumbers’ attempt to blackmail him but ultimately chose not to engage in the activity. Subsequent tapes proved that to be a lie as well, as Nixon was taped musing on Aug. 1, 1972, “Well . . . they have to be paid. That’s all there is to that.”

Nixon and company continued playing semantic games with the truth until a recording from June 23, 1972, revealed his efforts to aid the cover-up and link the crime to national security in order to obstruct justice. When that tape was uncovered, even Nixon’s staff knew the jig was up. Special assistant Pat Buchanan and White House Chief of Staff Alexander Haig (a retired general and fascinating precursor to current Chief of Staff John Kelly) attempted to convince Nixon that the battle was lost and he had to resign, but their appeals went largely unheard.

What pushed Nixon to continue his fight was a deep sense of personal grievance. He told people he was being “persecuted” as if he were the victim of a witch hunt. He drank heavily, leading his staff and family to worry that he might be suicidal. He wandered the halls of the White House, rambling incoherently to the portraits of past presidents. It isn’t difficult to imagine that if social media had been available, an incapacitated and irate Nixon could have logged onto Twitter to declare his innocence and lash out against his enemies.

Eventually, Nixon’s political base eroded and made his decision for him. Republicans in Congress grew tired of the circus and his votes vanished. At a Republican meeting on Aug. 6, 1973, Sen. Norris Cotton of New Hampshire told his colleagues, “We sit here very quietly, and the president is going along in his own way and at his own pace. We can’t sit quietly any longer.”

The next day, an envoy of Republican leadership met Nixon in the White House to deliver the bad news. Goldwater, along with Sen. Hugh Scott of Pennsylvania and Rep. John Jacob Rhodes of Arizona, told the president that if he didn’t resign he would surely face impeachment and eventually be convicted in the Senate. They appealed to him to do his duty and spare the country the horrors of a president being forcibly removed from office.

Nixon did just that.

It’s terribly hard to believe that this iteration of the Republican Party has any intention to follow the honorable example of their forebears. Even as Trump has virtually admitted collusion -- and has undeniably admitted obstructing justice -- the Republican Party has been largely silent on the matter, choosing instead to turn the other way as members of Congress like House Intelligence chair Devin Nunes do everything in their power to protect the president from investigation.

The duty that Goldwater, Scott and Rhodes demanded of Nixon feels like a relic of the past. In Trump we have found a man unhindered by any sense of obligation or conscience, and in his base we’ve found an electorate and a party uninterested in anything besides personal empowerment. If this version of the Republican Party had been in place in 1974, we might very well have seen a group entirely untroubled by recorded evidence of their president committing a crime.

Something has changed in the last 44 years, and we have seen a drastic and troubling transformation in how our politics function. Nixon tried as he might to keep moving the goalposts but reached a point of reckoning where there was no more room for maneuvering or excuses. He was penned in, and that penning was largely the result of a Republican Party that ultimately determined to see past partisanship and revere duty to country.

Former director of national intelligence tells Salon how and why the Russians helped elect Donald Trump.