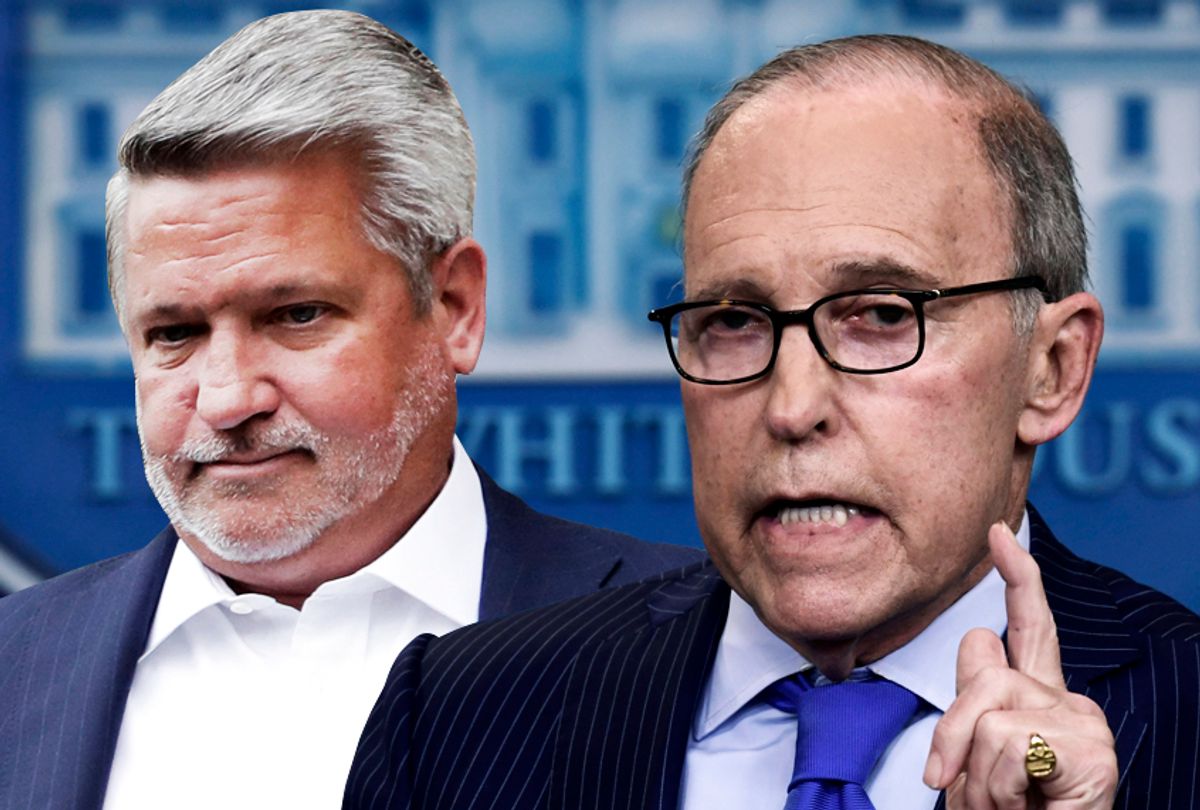 A new ethics waiver for two top White House officials is raising questions about the propriety of President Donald Trump hiring a former cable news honchos to top positions in his administration.

Trump's deputy communications director and top economic counselor have been granted special waivers to continue communications with their former employers.

Last month the Counsel to the President granted Bill Shine an ethics waiver that authorizes him to speak to employees of Fox News despite having formerly been employed by the network.

"After careful consideration, I have determined that it is appropriate and in the public interest to provide a limited waiver of the restrictions in section 2635.502(a) to authorize you to participate in meetings and communications with Covered Organizations or Covered Individuals which you otherwise may be barred from communicating or meeting with regarding broad policy matters and particular matters of general applicability in your official capacity, even if the communication or meeting is not 'open to all interested parties,'" the waiver explained. "The Administration has an interest in you interacting with Covered Organizations such as Fox News and Covered Individuals on issues of importance to the Administration and your position requires you to interact with Covered Organizations and Covered Individuals in the manner described above in order to further those interests."

White House economic advisor Larry Kudlow was also granted an exemption from the ethics rule to speak to his former employer, CNBC.

While there is nothing inherently wrong with an ethics waiver being granted to a government official in order to do his job, the fact that such a waiver was necessary for Shine does raise questions about the wisdom of hiring him in the first place.

"Essentially the regulation at 5 C.F.R. § 2635.502 is the impartiality regulation," Delaney Marsco, Ethics Counsel at the Campaign Legal Center, told Salon. "And basically what it does is if an employee is going to be involved in some matters that might create an appearance of partiality, they can ask for an authorization and they can ask for advice from an ethics official, and the ethics official can authorize them to participate in those matters. That's essentially what this memorandum is. It's an authorization under 5 C.F.R. § 2635.502(d) that will allow Bill Shine to communicate with his former employer which is Fox."

"In terms of whether or not this is 'ethical,' I mean it's definitely legal," Marsco told Salon. "Ethics waivers and authorizations are allowed. They are contemplated by the executive order ethics pledge, which is E.O. 13770, and by the impartiality regulation (obviously they have cited the impartiality regulation). Obviously it's prudent to allow the deputy chief of staff for communications... to be able to communicate with press outlets and not have to not answer questions just from one outlet."

She added, "Whether or not it creates sort of this appearance of a revolving door problem, especially given the administration's close relationship with Fox News, that's kind of a separate matter. Whether or not it was prudent to hire him is another question. But in terms of the process of issuing the waiver and getting an authorization, that's contemplated by the ethics regulation and the ethics pledge."

The point about Shine representing a potentially unseemly presence by Fox News in the Trump White House was raised on Monday in a piece published by The Washington Post.

The revolving door between Fox News and Republican political figures has turned steadily for years, with failed GOP candidates finding a home at the network.

But since Donald Trump was elected president, the door has provided a number of former Fox personnel with entree into a government now infused with the cable channel’s fiery sensibility. And with Bill Shine’s appointment this summer to a top job in the White House, the door may finally come to rest.

The two worlds have merged into one universe: the Fox News White House. If Donald Trump is running his own touch-and-go reality show from Pennsylvania Avenue, he has finally found in Shine his executive producer.

Shine has also been given a key role in crafting the Trump administration's message to the public, one that raises even more questions about his relationship with Fox News.

Shine was his No. 2, known as the Ailes enforcer. As the White House’s deputy chief of staff for communications, he has been given a broad mandate to create a cohesive message for an administration in which the president’s whims and missives often make such unity impossible. And with Trump stepping up his campaigning ahead of the Nov. 6 midterm elections, message discipline is all the more crucial for the president and his party.

Despite concerns from Trump's critics about Shine's fitness, however, he has received glowing reviews from at least two of the White House's big power players.

"Bill is a strong leader who brings a lot of insight and expertise — he’s a great asset to the president and the rest of the team. As I’ve gotten to know Bill more over the last month it’s clear he is someone who loves his family and his country and is totally committed to fighting for the president’s agenda," White House press secretary Sarah Huckabee Sanders told the Post in an email.

Kellyanne Conway, the counselor to the president, also told the Post that "Bill has spent decades on the other side of the camera. This allows for a deep-breath frame of reference sometimes lost in the din and churn of nonstop ‘news.’ " She added that Shine's "role in building the most-watched cable news channel — amid early ridicule and relentless, yet hopeless, critics — equips him for the rigors of a fast-moving White House and an even faster-moving president."

There are few questions that, when it comes to Trump's worldview, the match between him and Shine is an obvious one. Of course, if the hiring of Shine requires an ethics waiver because it raises the specter that Trump may become even more closely tied to Fox News than is already the case, it still may be dangerous for America.

A former Obama aide talks to Salon about the current state of Fox News.