Penn Jillette on Trump during "Celebrity Apprentice": "He would say racially insensitive things"

In a new interview, the magician seemingly corroborated Omarosa's claims: "I was in the room" 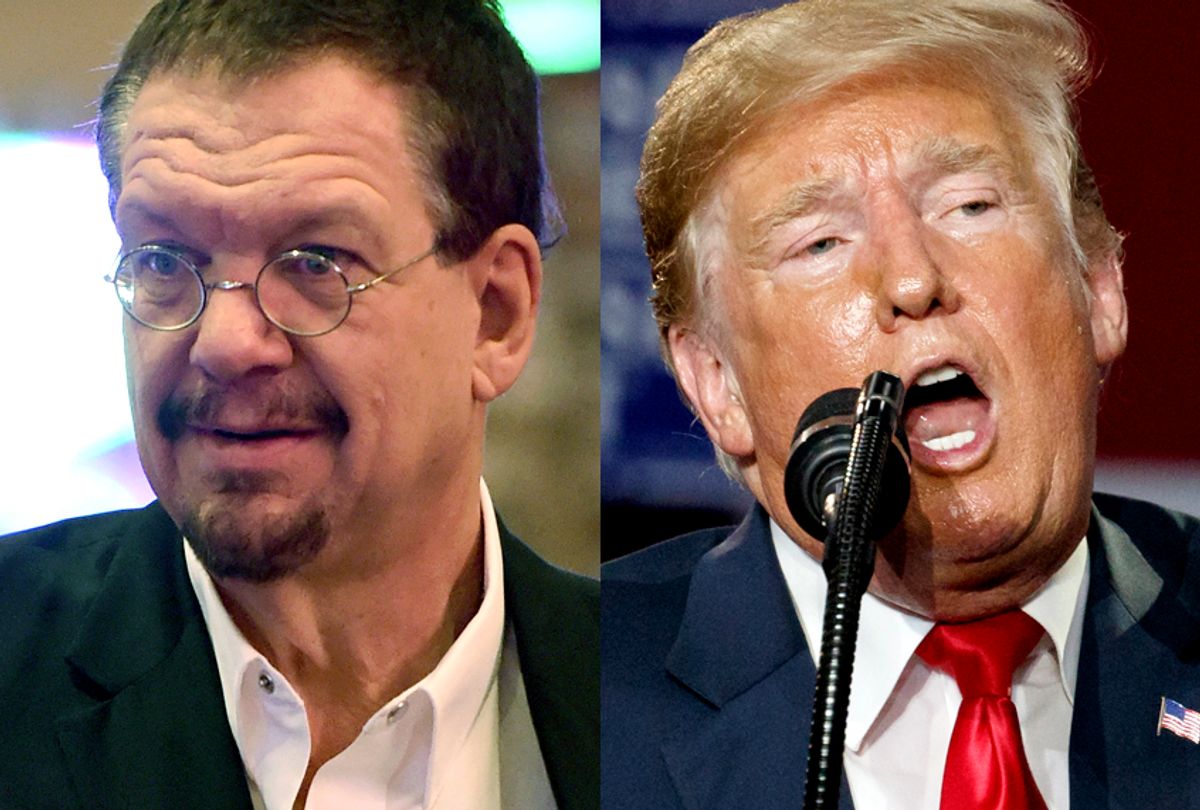 Magician Penn Jillette, known as half of the team Penn & Teller, seemingly backed up Omarosa's allegations that there are tapes of President Donald Trump making racially inappropriate remarks during the filming of his NBC reality competition show, "The Celebrity Apprentice."

In an interview with Vulture, the magician said that Trump, then a real estate mogul, "would say racially insensitive things that made me uncomfortable."

"I don't think he ever said anything in that room like 'African-Americans are inferior' or anything about rape or grabbing women, but of those two hours every other day in a room with him, every ten minutes was fingernails on chalkboard," Jillette continued. "He would ask one cast member if he’d rather have sex with this woman or that woman."

There have long been rumors of the existence of outtakes from the reality franchise in which Trump can allegedly be heard uttering the "N-word." Former "Apprentice" star turned executive branch staffer Omarosa Manigault Newman revived the allegations in "Unhinged," her new tell-all memoir about her time inside Trump's White House. Omarosa claims she heard an audio recording of the president after her book was sent to press and that the outtakes' existence was known at high levels of Trump's 2016 presidential campaign.

When New York Magazine reporter David Marchese asked Jillette, who appeared on Seasons 5 and 6 of Trump's show, if such tapes existed, the magician responded affirmatively. "Yeah," he said. "I was in the room."

But Jillette declined to repeat exact quotes from the president, claiming he feared that he would get the details wrong. "If Donald Trump had not become president, I would tell you all the stories. But the stakes are now high, and I am an unreliable narrator," he said. "So I can emotionally tell you things that happened racially, sexually and that showed stupidity and lack of compassion when I was in the room with Donald Trump. And I guarantee you that I will get details wrong. I would not feel comfortable talking about what I felt I saw in that room, because when I was on that show I was sleeping four to five hours a night. I was uncomfortable."

The president insisted in tweets on Monday that "there are NO TAPES of the Apprentice where I used such a terrible and disgusting word as attributed by Wacky and Deranged Omarosa. I don’t have that word in my vocabulary, and never have. She made it up."

Tuesday, Trump lauded Chief of Staff John Kelly for "quickly firing that dog!" — an insult that has both racist and sexist historical roots.

White House Press Secretary Sarah Sanders has described Omarosa's book as "riddled with lies and false accusations." However, Tuesday she told reporters she could not guarantee that Trump has never said the racial epithet. "But I can tell you that the president addressed this question directly," Sanders said. "I can tell you that I’ve never heard it."

Trump's presidency and the future of the GOP