Trump staffer Katrina Pierson suggests it's fine to call a woman a dog: "It depends on what she did" 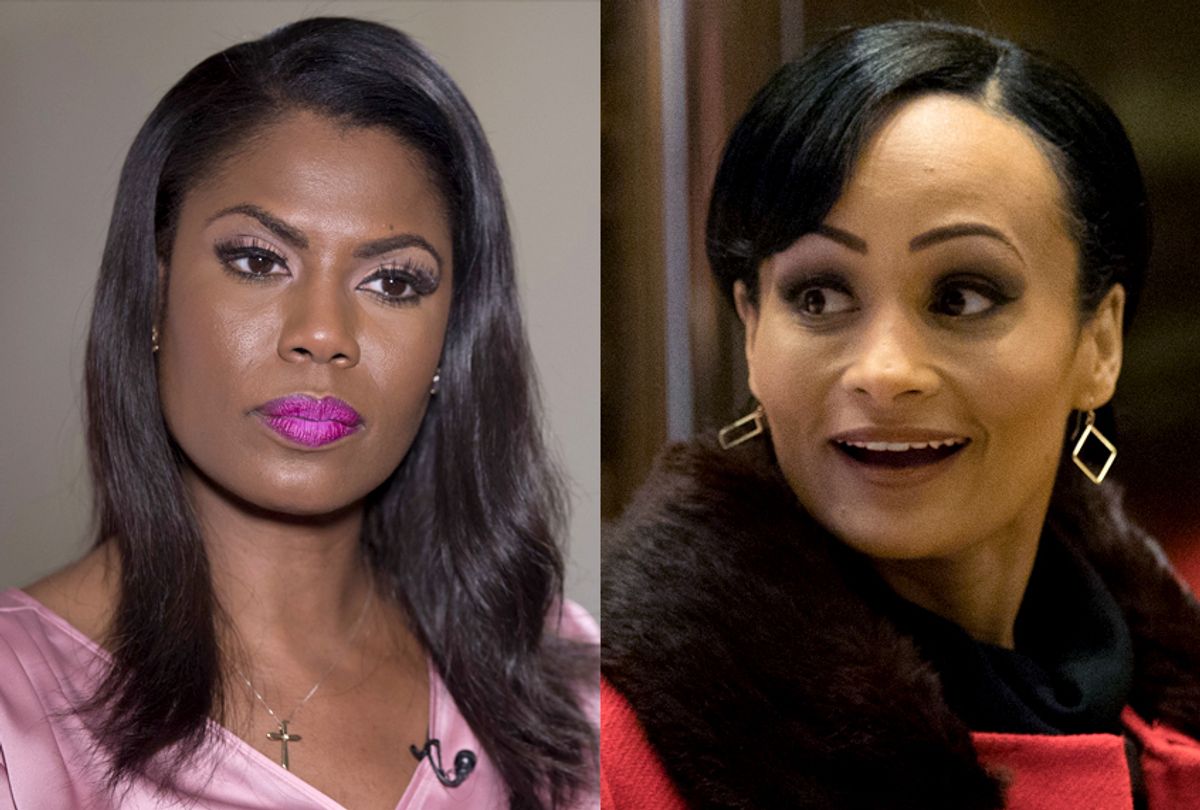 For the second night in a row, Katrina Pierson, the embattled senior adviser to President Donald Trump's 2020 re-election campaign, went on Fox News Tuesday to continue to deny the existence of the alleged "N-word" tapes. Pierson, who was visibly reading her talking points during the segments, seemed to have one strategy: confuse and deflect.

"You just misquoted yourself," Fox News host Ed Henry told Pierson at one point. However, the real headline came at the end of the heated interview, and it was one that was entirely impossible to conflate.

On a tape provided by former "Apprentice" star turned ousted White House staffer Omarosa Manigault Newman to CBS News earlier that morning, Pierson claimed that Trump had indeed uttered the racial slur. "He said it," she is caught on tape saying. "He is embarrassed by it."

Tuesday evening, Pierson told CNN's Erin Burnett that she was merely humoring Omarosa when she seemingly confirmed the tape's existence. Omarosa was "the complete epitome of annoying," and Pierson had "to finally give in, in order to get on about (her) day."

On Fox News, however, Pierson ratcheted up her personal attacks. "She is a dog with a bone with this tape," Pierson said of Omarosa, echoing her own boss' controversial attack on the former White House staffer.

Earlier in the day, the president had tweeted the following: "When you give a crazed, crying lowlife a break, and give her a job at the White House, I guess it just didn’t work out. Good work by General Kelly for quickly firing that dog!"

Henry, the host of the Fox News segment, asked Pierson to "stick to facts and not attacks." But Pierson's word choice didn't go unnoticed. After the two finished discussing the "she said, she said" battle with Omarosa, Henry used the final minutes of the segment to make a point about words and why they matter.

"So, you just used the term 'dog.' The president called Omarosa a dog. I was talking to you before the show. You have a son. You always in private talk to me about him. You love him very much," Henry said to Pierson. "I'm going to leave the president out of this. Do you raise your son to call a woman, any woman in this country, a dog?"

"Well, this isn't about my son," Pierson responded in an attempt to reclaim control of the conversation.

"No, I'm not going to let you do that," Henry retorted, blocking her effort to deflect his question.

"We're talking about someone who built her entire career on this man," Pierson added, speaking over Henry. "This is a personal issue between Donald Trump and Omarosa."

Henry, perhaps recognizing that he had struck a personal chord, opted to rephrase his question.

"Let's leave your son out of it then, and we'll leave the president out of it then," he said. "Would it be appropriate for me to call a woman a dog: Yes or no?"

"It depends on what she did to you, Ed," Pierson replied.

"It depends?" Henry asked, after Pierson seemed to suggest it was indeed OK for a man to call a woman a dog.

Pierson doubled down. "It depends on what she did to you."

"It depends? To call a woman a dog?" Henry responded.

"Omarosa has bit the hand that fed her. To me that's what a dog is," Pierson said, before changing the topic of conversation to other men whom the president had attacked in the past.

"Take off your Trump hat," Henry said, again rephrasing his question. "As a woman, do you think it is appropriate for any man to call a woman a dog, really?"

"Look, as a woman, as a strong black woman, I think everyone should be able to defend themselves the best way they see fit, Ed," Pierson answered.

To be clear, Pierson, who is a woman of color, suggested on live TV that she thought it was acceptable for the most powerful white man in the world to equate her peer to a dog. There could only be one word that the president was not so subtly suggesting when he used the word "dog," and it is one incredibly derogatory term for a woman.

But the attack was not just mysogynistic. It was also openly racist, as it dehumanized Omarosa, who was at one time the highest ranking woman of color in Trump's White House, by comparing her to an animal. And it is arguably worse given the context: The president is using this language as he denies that tapes of him saying the "N-word" exists.

As the president's outburst comes on the heels of the racist language directed by one his most ardent supporters, Roseanne Barr, at another powerful woman of color, one cannot help but see the differences in how their comments were received. Barr was swiftly fired by ABC after claiming that Valerie Jarrett, the former senior adviser to President Barack Obama, appeared as if the "Muslim brotherhood & Planet of the apes had a baby." However, neither Speaker of the House Paul Ryan nor Senate Majority Leader Mitch McConnell has called for Trump's apology or dismissal.

This identity politics built on stirring white resentment has shifted off of Fox News airwaves and into the Republican Party platform. Perhaps the Pulitzer Prize-winning columnist for The Washington Post, Eugene Robinson, said it best when he wrote that Trump was essentially "hanging a 'Whites Only' sign on the GOP" with his rhetoric.

"When Donald Trump disparages African Americans as 'low I.Q.' and dehumanizes a black woman as 'that dog,' he's speaking the language of white supremacy," Robinson wrote in a follow-up tweet, before issuing a call to action.

"Get mad, and then get even: Vote against his enablers in November."