Michael Caputo, Raheem Kassam, Sam Nunberg and Austin Petersen are all on board with Bannon's new political PAC 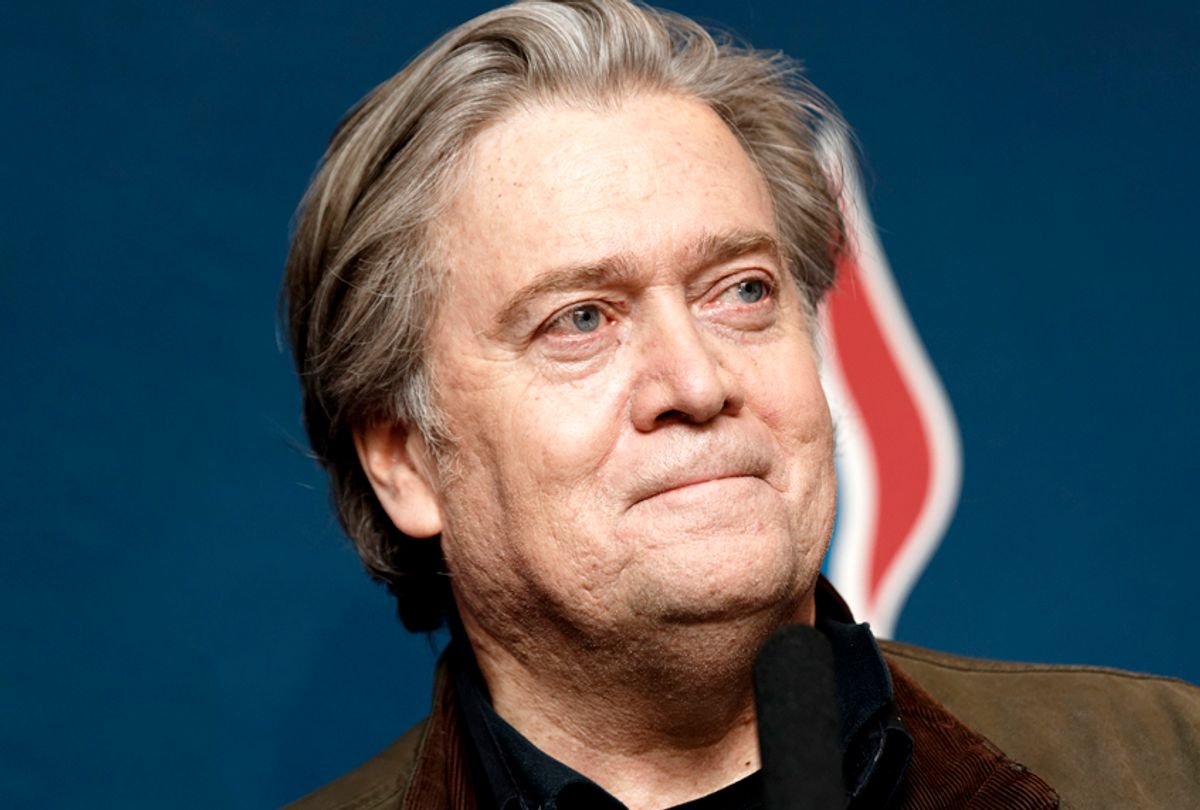 Steve Bannon, the former Breitbart executive who served as President Donald Trump's chief strategist for seven months, is returning to the political fore to implement a plan that he believes will hold the Senate and House of Representatives for Republicans in the upcoming midterm elections.

The strategy? Scare Republican voters to the polls by warning that if Democrats retake the House, they will vote to impeach the president.

Bannon has started an outside political group known as Citizens for the American Republican that will produce TV and radio content, write up talking points and provide advice to surrogates in order to spread the message that Trump's political future is at stake in the upcoming midterm elections, according to Politico. This will include releasing a documentary called "Trump@War" which will praise the president's record in office and skewer the liberals who have criticized him.

So far, other prominent Republicans seem to think Bannon's right.

"I agree with Steve Bannon 100 percent: the mid-term elections are a referendum on the President and a vote for Republican House candidates is a vote to stop a bogus partisan impeachment," Michael Caputo, who worked as a communications adviser for Trump's 2016 presidential campaign, told Salon by email. "I understand why some in the White House and official GOP organs may not behind this message — they have many reasons. But I'm not buying it: impeachment will definitely be on the Democrat agenda if they win the House, and this must be stopped. I'm not afraid to talk about this, regardless of where the Washington Republicans consultant class comes down on it."

Caputo's views were echoed by Raheem Kassam, a former writer for Breitbart who is running for mayor of London in 2020 on the United Kingdom Independence Party ticket.

"The public have known for some time that these mid terms aren’t necessarily about their local candidates, they’re a referendum on the Trump administration. Democrats forced that the day after the inauguration when they demanded a do-over. Well here it is," Kassam told Salon by email.

He added, "Bannon put his finger on it before anyone else, including Republican Party leaders, some of whom have wanted to fight on tax cuts, or other arcane issues."

Austin Petersen, the runner-up for the Libertarian Party presidential nomination in 2016 and a former Republican Senate candidate in Missouri, expressed similar thoughts.

"It's very clear that the Democrats will stop at nothing to remove Donald Trump from office," Petersen told Salon by email. "The midterm elections very well could decide that. Unfortunately, in states such as Missouri we are facing a very real potential blue wave with Democratic-friendly measures on the ballot and a primary turnout that could translate into a general election blowout. Democrats are united in Missouri and ready to vote on minimum wage, marijuana, Clean Missouri, and a potential gas tax increase. Republicans are on defense and if we don't find a compelling offensive strategy, we're in trouble, and by proxy, so is President Trump."

Sam Nunberg, a lawyer and public affairs consultant who advised Donald Trump during his 2016 presidential campaign, emphatically supported Bannon's idea during a phone interview with Salon, adding that he thought it was absurd for Republican politicians to try to politically avoid the president.

"This whole notion that the Republican Party, some have said within the consulting class and advisers on our side, that these candidates need to run away from Donald Trump is nonsensical and illogical. Nonsensical because Donald Trump is the issue. Donald Trump is going to be front-and-center," Nunberg told Salon, pointing out that Democrats clearly would try to impeach Trump if they had the power in Congress to do so.

He added, "We are on defense here. So you have to reset the terms to go on offense."

The right-wing reaction to Bannon's strategy seemed to be neatly summed up by Kassam's sentiment, "November represents a right against both the ‘resistance’ of the left and the resistance of the political establishment."

These sentiments are very much consistent with what Bannon told Politico about his strategic thinking regarding the midterm elections.

"It’s very simple to me. This is a referendum on Trump, up-or-down vote on impeachment. This other side, they’re very motivated — and they’re motivated for one thing: They want to impeach Donald Trump," Bannon told Politico.

He added, "This is the re-elect. How do you use this to trigger the civil war in the Democratic party? You must win. [The midterms] have more value than the typical, ‘We‘re holding the House.‘"

There is one potential complication in both a potential Democratic strategy of impeaching Trump and a Republican strategy of arguing that his removal from office would be inevitable if Democrats retake Congress, however. In order to remove him from office, Democrats would need two-thirds of the Senate to vote to convict him on any articles of impeachment that successfully pass in the lower chamber. There are 43 Republicans and 24 Democrats who will remain in the Senate in 2019, barring unforeseen circumstances, because they aren't up for reelection. Of the remaining seats, eight are currently held by Republicans (three of whom are retiring) and 23 are held by Democrats, with the other two being held by liberal-leaning independents from New England (Angus King of Maine and Bernie Sanders of Vermont).

This means that — even if Democrats won every single election in a seat currently held by a Republican, held all of the seats currently in their possession, could count on conservative Democrats like Joe Manchin of West Virginia, Heidi Heitkamp of North Dakota and Joe Donnelly of Indiana to convict Trump and could take for granted that King and Sanders would do likewise — they would only be able to rely on 57 votes. This would require them to convert at least 10 Republicans to their cause, and not a single Republican senator can be safely considered as a guarantee on that front.

This doesn't mean that Trump wouldn't be removed from office if Democrats retake Congress. It simply means that, even if Democrats' greatest dream and Bannon's worst fears are realized and the Democrats control the legislative branch come 2019, that hardly means that Trump will be out of office by 2020.

The case for impeachment

Could Trump be impeached?