Omarosa defends "hush money" claim: "Every time the Trump people challenge me, I bring the receipts" 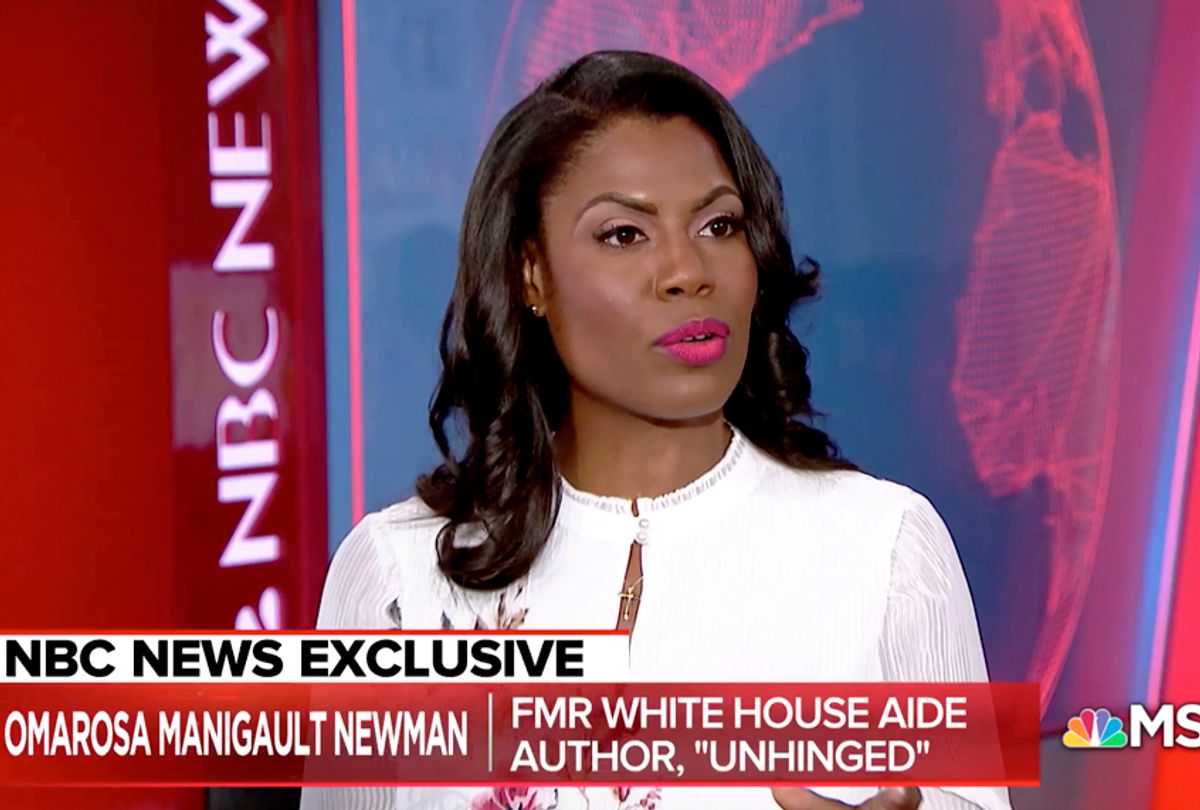 Omarosa Manigault-Newman, the former "Apprentice" star who was later fired from her senior role at the White House, continued her media blitz Thursday promoting a new tell-all memoir about her time inside the White House titled "Unhinged." Following days of attacks from President Donald Trump and his inner-circle on her credibility, Manigault-Newman offered a firm message on live TV: "Donald Trump has met his match."

Manigault-Newman, who was formerly the director of communications at the White House Office of Public Liaison, aide, released to NBC News an audio recording of a conversation she had with Trump campaign official Lara Trump, who is married to Donald Trump's son Eric. In the tape, Lara Trump can be heard offering Manigault-Newman a $15,000-a-month job in the wake of her dismissal from the White House. According to Manigault-Newman, turned down the position, which came with a condition: signing a non-disclosure agreement.

The tape corroborates earlier claims from Manigault-Newman, which were dismissed by those in Trump's orbit. In its exclusive report, NBC News elaborated:

The tape — which, according to Manigault Newman was made on Dec. 16, 2017, just days after she had left the White House — appears to corroborate claims she made in her new book about receiving an offer from the president's re-election campaign. Manigault Newman wrote in her book that the job offer came with the condition of signing a nondisclosure agreement; she said she did not accept it.

On the newly unearthed recording, Lara Trump can be heard telling Manigault-Newman, "It sounds a little like — obviously — that there are some things you've got in the back pocket to pull out."

"Clearly, if you come on board the campaign — like, we can't have — we got to —" Lara Trump continues, before Manigault-Newman interjects: "Oh, God. No."

In an interview with MSNBC's Craig Melvin following the broadcast premiere of the tapes, the former "Apprentice" contestant claimed that the recording was proof of "an attempt" by the Trump machine "to buy my silence, to censor me and to pay me off."

When asked by Melvin if she considered the offer to be "hush money," Manigault-Newman responded without hesitation, saying "absolutely." "I am here to blow the whistle," the former "Apprentice" star declared.

Manigault-Newman further claimed that, according to Lara Trump, the "hush money" offer was made at the president's behest. "She was very specific that it was, as we call him DJT — that it was Donald Trump that wanted to make this offer to me," she said.

In another part of the recording, Lara Trump is heard explaining to Manigault-Newman that "the only thing that we have to consider, where we're talking salary as far as the campaign is concerned, is that, as you know, everything is public."

"All the money that we raise and that pays salaries is directly from donors – small-dollar donors for the most part. So – I know you – you were making $179 at the White House. And I think we can work something out where we keep you right along those lines," Lara Trump continued. "Specifically, let me see, I haven't even added up the numbers. But we were talking about – like 15K a month. Let me see what that adds up to. Times 12. Yeah, so that's $180,000. Does that sound like a fair deal for you?"

In another excerpt, Lara Trump seems to indicate that Manigault-Newman's position had few strings attached. The former White House staffer might be asked to do speaking engagements, which she would "be awesome at." "It doesn't really matter where you are," Lara Trump also said.

Manigault-Newman referred to the lack of contingencies as very "cavalier" on Lara Trump's part. "I could basically decide what I wanted to do and how I wanted to do it . . . as long as I signed on the dotted line and accepted this $15,000 a month," she said.

Although Manigault-Newman's claims would have to be throughly investigated by authorities, her allegation of a "hush money" payment does call into question if any federal campaign finance laws were possibly violated.

Melvin asked Manigault-Newman if she planned to release more tapes, which she said was within the realm of possibility.

"I am not going anywhere. I am not going to be bullied. I am not intimidated," she responded. "And I'm going to go toe to toe with him, everything he throws at me. Believe me, my tapes are better than theirs."

The pair also spoke about the possible threat of arrest. In Vanity Fair, MSNBC contributor Gabriel Sherman reported that the president had asked his Attorney General to arrest her:

In recent days, Trump has called Manigault Newman “crazed,” a “lowlife,” and a “dog” on Twitter. His campaign filed an arbitration suit against her seeking “millions.” And Trump told advisers that he wants Attorney General Jeff Sessions to have Manigault Newman arrested, according to one Republican briefed on the conversations. (It’s unclear what law Trump believes she broke.) Another Republican recounted how over the weekend Trump derailed a midterm-election strategy session to rant about Manigault Newman’s betrayal

"What Mr. Nixon – I mean Mr. Trump – does will be brought to light," Manigault-Newman responded. "Every action that he takes against me jeopardizes him and his presidency."

The former "Apprentice" star, who is herself an ordained Baptist minister, then turned the conversation to the divine. As evidence of her unresolved strength, Manigault-Newman offered that she has a whole community of people of faith standing beside her and praying for her amid the fire and the fury being aimed at her from President Trump's machine.

"No matter who is in the Oval Office, Donald Trump needs to remember that God is on the throne," she said.

Thursday's release was the fourth recording that Managault-Newman shared in recent days in the lead up to her book's Tuesday publication, in which she blasted the president as a racist and in mental decline. On Sunday, she disclosed a tape of White House chief of staff John Kelly firing her, and on Monday she shared an audio recording of a private conversation she had with Trump last year, in which the commander-in-chief seemed unaware one day later that she had been fired from her senior position in his own administration.

Also on Tuesday, Donald Trump's presidential campaign pursued legal action against former "Apprentice" star in New York, claiming she violated a non-disclosure agreement in a media blitz promoting her new tell-all memoir about her time inside the White House.