Donald Trump thinks he can save GOP in midterms: That could be a historic mistake

Trump forecasts a "red wave," while some Republicans think impeachment might be salvation. They're both wrong 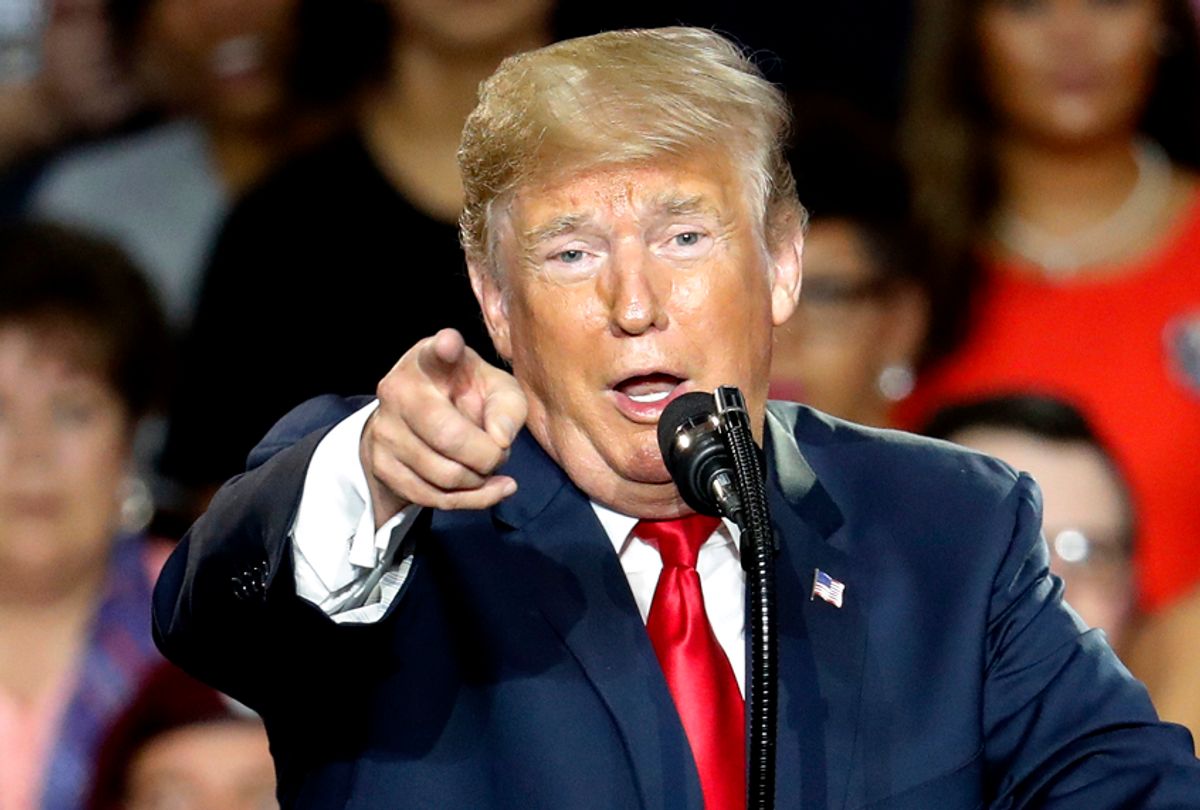 On Thursday, Salon's Matthew Rozsa reported that Steve Bannon, the man Trump fired for shooting his mouth off to "Fire and Fury" author Michael Wolff, is back on the scene plotting to save the midterm elections for the Republican Party. How is he going to do that? By motivating Trump supporters to show up to the polls to save their president from impeachment.

As Rozsa points out, Bannon neglects to mention that Trump would almost certainly survive an impeachment trial in the Senate, due to the two-thirds  requirement for conviction. But if there's one thing Bannon understands, it's the needs and desires of Trump voters, so it's safe to assume that won't stop them from rushing to the polls. A threat to their president is a threat to them.

On the other hand, according to Politico, other Republicans are quietly hoping the Democrats will win the House. If Trump is impeached, their thinking goes (but not convicted in the Senate, as above), they think it will assure his re-election in 2020. This counterintuitive notion is based on their experience with Bill Clinton whose popularity reached new heights as Republicans doggedly pursued him through the Monica Lewinsky scandal. They're assuming that the country would be so impressed by Trump's heroic survival that his approval rating would similarly skyrocket and he would win re-election easily.

This ignores the fact that Clinton was known for his ability to compartmentalize; he pretty much ignored all the hubbub of the scandals, repeatedly assuring the public that he was concentrating on the job of president. Trump's daily tantrums on TV and Twitter convey the opposite impression, to say the least. And the difference in the scope and seriousness of the two scandals -- a lie about a consensual affair, versus a conspiracy with a foreign power to sabotage the presidential campaign -- is profound. Trump and Clinton are very different animals, but many Republicans fail to see the difference and it's leading them toward self-destruction.

Trump himself is bullish on the coming election. He believes all the polls are fake and constantly predicts a "red wave" that will defy the usual midterm shift toward the opposition party and prove his massive popularity throughout the nation.

During an interview with the Wall Street Journal this week, Trump he kept ringing for his minions to "bring in charts showing his endorsement record" and bragging about his social media following. It's all about him:

“As long as I can get out and campaign, I think they’re going to win, I really do,” he said. “It’s a lot of work for me. I have to make 50 stops, it’s a lot. So, there aren’t a lot of people that can do that, physically. Fortunately, I have no problem with that.”

He has a yuge following and tremendous stamina, which he believes will leave the voters satisfied. Well, not all the voters. Some he evidently drives away:

There is no evidence this is true. Phillip Bump of the Washington Post took a closer look at Trump's claims about being a decisive factor and found that not only does he not "de-energize" the Democrats, he doesn't even energize Republicans. All the special elections Trump is so proud of winning took place in safe districts, mostly those being vacated by Republicans who were called up by the administration. By the numbers, the Republicans who replaced them did not perform all that well whether Trump held a rally or not.

Trump is not the first president to believe he has the magic touch that will save the party from midterm disaster. President Barack Obama famously told Democrats who were wavering on the Affordable Care Act to forget about the wipe-out they faced after the failure of Bill Clinton's health care bill in 1994: "Well, the big difference here and in ’94 is you’ve got me." That didn't work out as he promised. The Democrats took a much worse beating in 2010, now remembered as the "Tea Party wave" election.

A better comparison would be President Andrew Johnson, who carried out a flaming disaster of a campaign tour called the "swing around the circle" (for the circuit of cities to which he traveled) during the midterms of 1866, attempting to shore up support in Northern states for his lenient Reconstruction policies. Johnson was a Democrat in the era when that party was overtly racist and had only given up on slavery with great reluctance. His strategy was to heighten the tensions between moderate and radical Republicans, but it blew up in his face, alienating virtually everyone but his staunchest supporters in the South and leading to a Republican landslide.

In those days presidents didn't campaign much in person, so it was seen as a bit unseemly in any case. Johnson was known as a loose cannon so his advisers were very leery and begged him to stick to dull prepared speeches. He didn't. According to biographer Hans Trefousse, Johnson started out comparing himself to Jesus Christ because he believed in pardoning repentant sinners, in this case the treasonous secessionists of the South. He nonetheless got good press until he faced some hostile crowds at which point he lost his temper and started insulting them back. When his supporters reminded him to maintain dignity, he replied, "I don't care about dignity." (Does any of this sound familiar?)

It went downhill from there, culminating in a tragedy in which a platform built for one of Johnson's speeches collapsed and dropped hundreds of people 20 feet into a ditch. It was an apt metaphor for the trip.

Trump knows nothing about any of that, of course. His knowledge of history could fit in a shot glass. While the country at large is certainly polarized today, the political dynamics are different than they were in the immediate aftermath of the Civil War. It would behoove  Republicans, however, to recall that Andrew Johnson's "swing around the circle" strategy greatly damaged his presidency and he went on to be the first president to be impeached, only surviving conviction by one vote in the Senate. He couldn't even win the Democratic nomination in 1868 and the party lost the presidency later that year, with the election of war hero Ulysses S. Grant. Trump supporters who think it's a good idea to push impeachment as a campaign issue this fall should be careful what they wish for.

Legendary legal scholar is defending Trump, but still lays out a scenario that could force him from office.