After Michael Cohen pleads guilty and Paul Manafort is found guilty by a jury, a pro-Trump Fox News host melts down 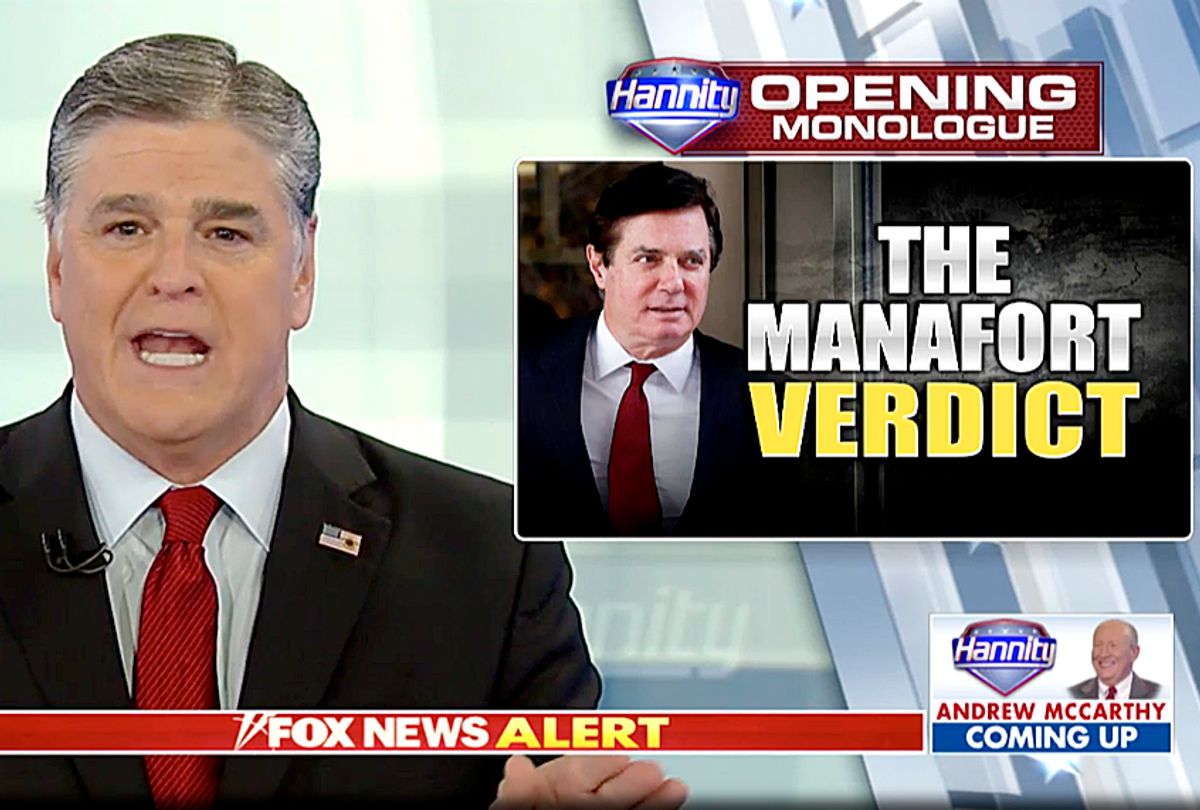 "I will tell you tonight that the sovereignty of your vote is now in question," an unglued Hannity declared at the end of his nearly 12-minute opening monologue following the Republican commander-in-chief's worst day in office. Early in the fiery rant, the Fox News host had warned: "every American that cares about our  constitutional republic, the rule of laws, equal application of the laws: You better be concerned tonight!"

Manafort was convicted by a federal jury Tuesday on five counts of tax fraud, two counts of bank fraud and one count of failing to properly disclose his foreign bank accounts. In tandem, Cohen pleaded guilty to multiple counts of tax evasion, bank fraud and making false statements regarding a credit decision. But most astonishing was a violation of federal campaign finance laws, including his admission that he had paid off adult film actress Stormy Daniels "at the direction of the candidate."

Both Manafort and Cohen, now felons, face decades behind bars and will lose their right to vote. Yet Hannity openly expressed deep empathy for the pair of financial crooks, seemingly because of their shared loyalty to Trump. (Hannity and the president infamously talk to each other before bed most nights.)

"It's not funny, because these are real peoples' lives," Hannity bemoaned. "These are real families. This is way beyond what this mandate was."

The Fox News host then claimed, with questionable evidence, that by mere virtue of being associated with Trump one's life could now be "scoured for potential crimes."

"Well, your doors will be kicked down late at night, early in the morning raids, the screws are going to be turned as Judge Ellis said," Hannity decried. "And they will ask you to sing or compose, or you'll go to jail for crimes that other people have committed and don't go to jail for." (All searches in special counsel Robert Mueller's investigation have been executed using search warrants issued by judges.)

Hannity then invoked the name of the numerous felons in Trump's orbit. In addition to Manafort and Cohen, the Fox News primetime star brought up Michael Flynn and George Papadopoulos. Of Flynn, Hannity offered empathy for the former general's service to "his country for 30 years." Of Papadopoulos, he lamented, "I bet he regrets volunteering for the Trump campaign!"

Using selective evidence, the Fox News host then asserted that America now has a "two-tiered justice system." According to Hannity, by mere virtue of being a Democrat, Americans can apparently get away with certain crimes. And – surprise! – it all somehow relates to Hillary Clinton.

"You can delete subpoenaed emails! Not one! Not ten! 33,000 of them! And acid-wash your hard drive with bleach bit! And eliminate the evidence! And then have an aide smash up your devices with hammers, and get away with it!" Hannity exclaimed as he melted down. "And you can even have an exoneration written months before you're even investigated!" (Fact check: There is no evidence that suggests Clinton washed her computer's hard drive with acid.)

Clinton, who was cleared of all criminal wrongdoing by former FBI Director James Comey in the lead-up to Election Day, has cast blame on her White House loss at the bureau's handling of the investigation into her emails. Yet Tuesday night, Hannity continued to demonize Clinton, who was exonerated, rather than actual felons. Of the pair, he asked, "How did we get to taxi cabs and tax fraud and bank fraud and lies to the FBI?"

Clinton was investigated over her use of a private email server — not alleged meddling with a foreign government, which is why Mueller's team is investigating Trump's 2016 presidential campaign. However, Hannity argued Tuesday night that Mueller's "witch hunt" was never actually about Russian collusion.

This is what we have been telling you for a long time, and we have the evidence," Hannity said, without providing any. "It is an attempt at a political takedown of a man who the deep state never wanted to be the president of the United States."