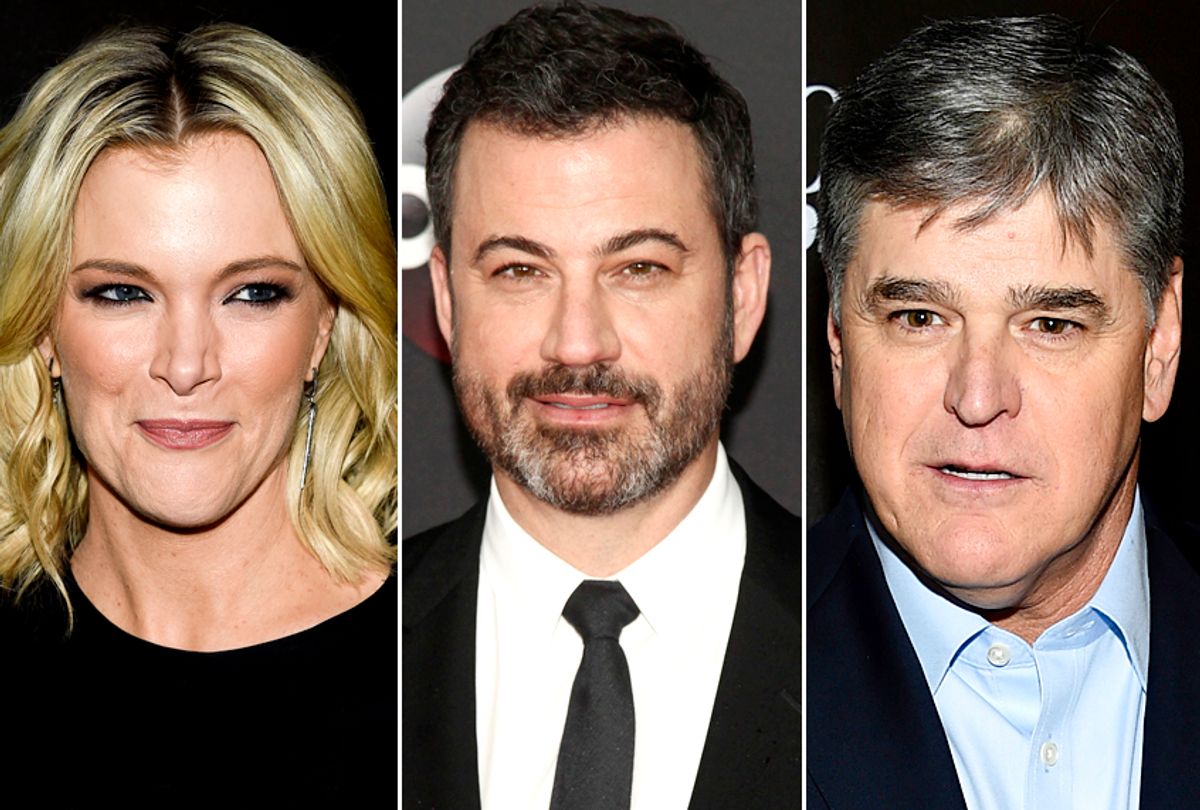 The Daily Beast published a wide-ranging interview with ABC's late-night host Jimmy Kimmel Wednesday, and in the first half, which I covered here, the comedian called himself a "fighter" and said he gets charged up by public spats with high-profile people.

And he is been involved in many. There are the countless times that President Donald Trump has ripped into Kimmel, by name or not, or when Roy Moore tried to intimidate Kimmel and the late-night host demolished him, or when Kimmel shut Donald Trump Jr. down on Twitter.

But the most intense battle in recent memory has been between Kimmel and Fox News host Sean Hannity, who infamously referred to the late night host as "Harvey Weinstein Jr." based on material from Kimmel's satirical comedy series "The Man Show," which ran from 1999-2004.

"Yeah, well, I mean he’s a lunatic," Kimmel told the Daily Beast. "He’ll say anything. That he would compare me to Harvey Weinstein, it’s just ridiculous. And he knows it’s ridiculous, but I realized somewhere along the line I wasn’t going to win anybody over in that argument. His supporters are on his side, mine are on my side and that’s kind of that. Whereas in a situation like Roy Moore, I really felt that if there was any even tiny thing I could do to remind people what kind of man this person was, that I would want to do that."

When probed about Hannity's usage of old clips from "The Man Show," Kimmel replied: "Yes, Sean Hannity seems conveniently unaware of the fact that the show was on television and that everyone involved was a willing participant."

Kimmel added that he doesn't really spend time worrying about how the show aged or looking back on it now. "I don’t think you can’t look at things in that way," he said. "If you do, you’re bound to lose. That show was always tongue in cheek. And some people enjoyed it for the wrong reasons. There’s no question about that. But I think you can put a lot of shows into that category. And it was a show that people liked and we had fun doing it and I learned a lot doing it. As the show went on, we refined it."

Kimmel said he and Adam Carolla, co-host and co-creator of "The Man Show," decided to end the show because what the audience ended up laughing at were not the planned jokes – and it became "disheartening."

Looking forward to the Oscars, Kimmel said they have not decided yet who will host. And he is not sure if he would agree to host again, anyway. But Kimmel certainly had some words for NBC's Megyn Kelly, who offered unsolicited advice to the Oscars about how they could combat plunging viewership.

"I'll say one thing, if the Oscars want better ratings, they should really consider stopping the political speeches," Kelly said on "Megyn Kelly Today." "Because I think a lot of us don’t tune to get a lecture on politics. We’re looking to have a moment of escapism. We want to hear politics, tune in to cable news."

"And I would also say for the record, maybe choose a host — because the last time around they had Jimmy Kimmel," the former Fox News host added. "I know a lot of people love Jimmy, but he’s openly said he has disdain for Republicans — that they’re stupid — and he doesn’t want them watching his shows if they disagree with any of his opinions. That does not tend to help your ratings."

Kimmel was not impressed. "Isn’t it funny to hear someone like Megyn Kelly, who based on her ratings probably won’t make it to the end of the year on NBC, talking about anyone else’s ratings?" he said. "You know, network television is in decline. The ratings for everything are going down every year. There are too many shows to keep up with. So that’s going to happen every year. And I said it beforehand, I said this year’s Oscars are going to be the lowest-rated. Maybe if they shorten the show it will cause an artificial spike in the ratings. But that’s just how it’s going to go. The audience is going to get smaller and smaller every year."

The evolution of the Academy Awards

Do the Oscars still matter?