Trump loves to bring up poor ratings. This time, Kimmel didn't let the president forget his own 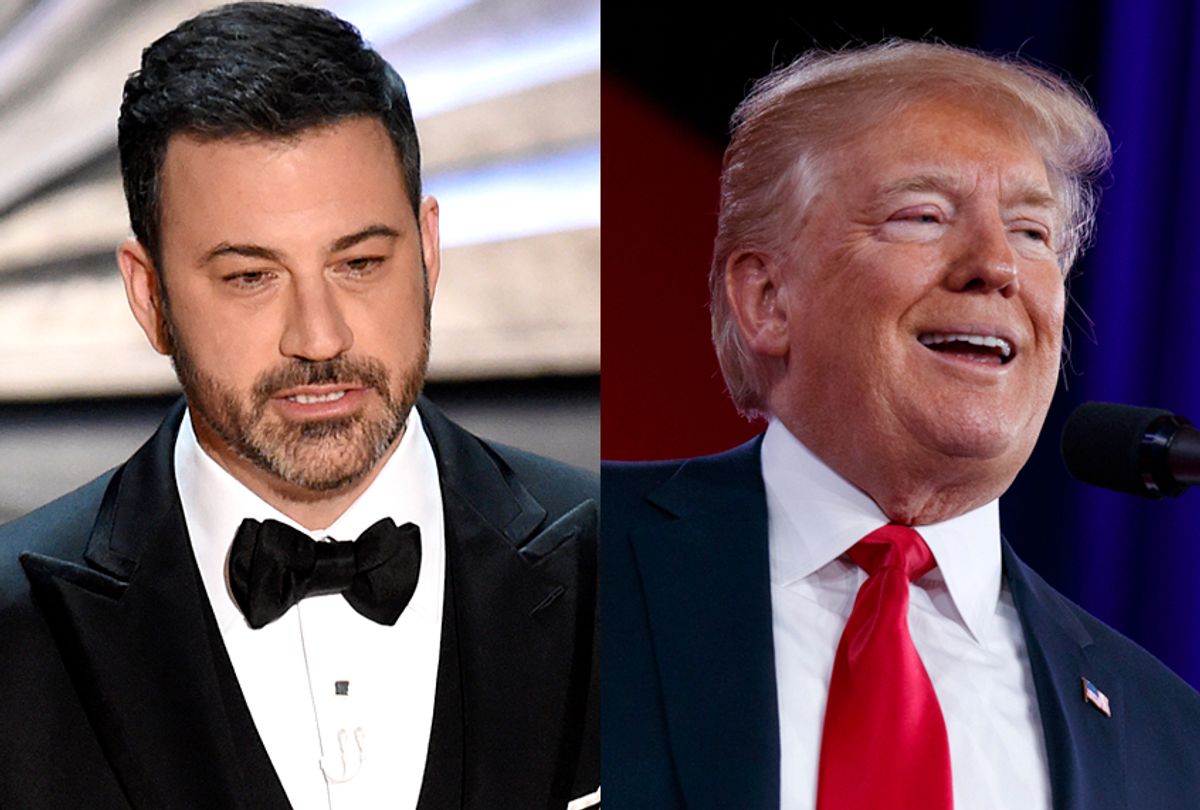 President Donald Trump joined the chorus of conservative voices bashing the Oscars on Tuesday as he blamed the low ratings on a lack of star power like his own.

"Lowest-rated Oscars in history. Problem is, we don’t have stars anymore – except your president (just kidding, of course)!" he wrote on Twitter.

In a stinging response, Oscars host Jimmy Kimmel presented the president, who is well-known as an avid consumer of polls, with a different set of data to ponder. "Thanks, lowest rated president in history," Kimmel tweeted back at Trump.

Sunday's broadcast of the 90th annual Academy Awards finished with record-low ratings for the second year in a row. Approximately 26.5 million viewers watched the awards show, a 19 percent decline from 2017, which means the telecast was "easily the least-watched Oscars in history," according to The Hollywood Reporter.

Whether actually a joke or not, the president suggested his presence would have given the ceremony a necessary jolt of gravitas. Other conservative thought leaders suggested the real culprit was an unwelcome injection of progressive politics into the broadcast. Sarah Palin tweeted a link to a story accusing Kimmel, who touched on issues including sexual harassment and gun violence, of "lecturing America." Disgraced pundit Bill O'Reilly bragged that he didn't watch the show, but he still shared his opinion about it. "Right now there is a judgement jihad in Hollywood about politics and behavior. Cheap shots and false perceptions are running riot," he wrote.

O'Reilly's former colleagues at Fox News were equally dismayed. "Fox & Friends" host Brian Kilmeade said that "Jimmy Kimmel is basically Chuck Schumer with a sense of humor." While Ainsley Earhardt said of the show, "If you are a Democrat, you love it. If you’re a Republican, you probably don't watch." To illustrate their point, Fox News played a selectively-edited montage of jokes that targeted Trump, Vice President Mike Pence and the right-wing network itself as evidence of the Oscars' bias.

In reality, political discourse was largely toned down from a year ago when Trump was newly installed as president. This time around, the president and his antics took a backseat to the through line of the #MeToo movement and an onstage celebration of diversity anchored by wins for "Coco" and "A Fantastic Woman." But that didn't stop conservatives from taking a victory lap over the Academy's poor ratings.

The real plunge in the ratings took place pre-show on the red carpet, where politics could not be made a scapegoat. E's "Live from the Red Carpet" coverage dropped a staggering 35 percent, far greater than Oscars' loss. E! attempted to forgo any backlash against host Ryan Seacrest, accused by his former stylist of sexual harassment, by implementing a 30-second delay. Swaths of viewers tuned out instead.