Gamers are right: Jacksonville mass shooting was not caused by video games because games don't cause violence 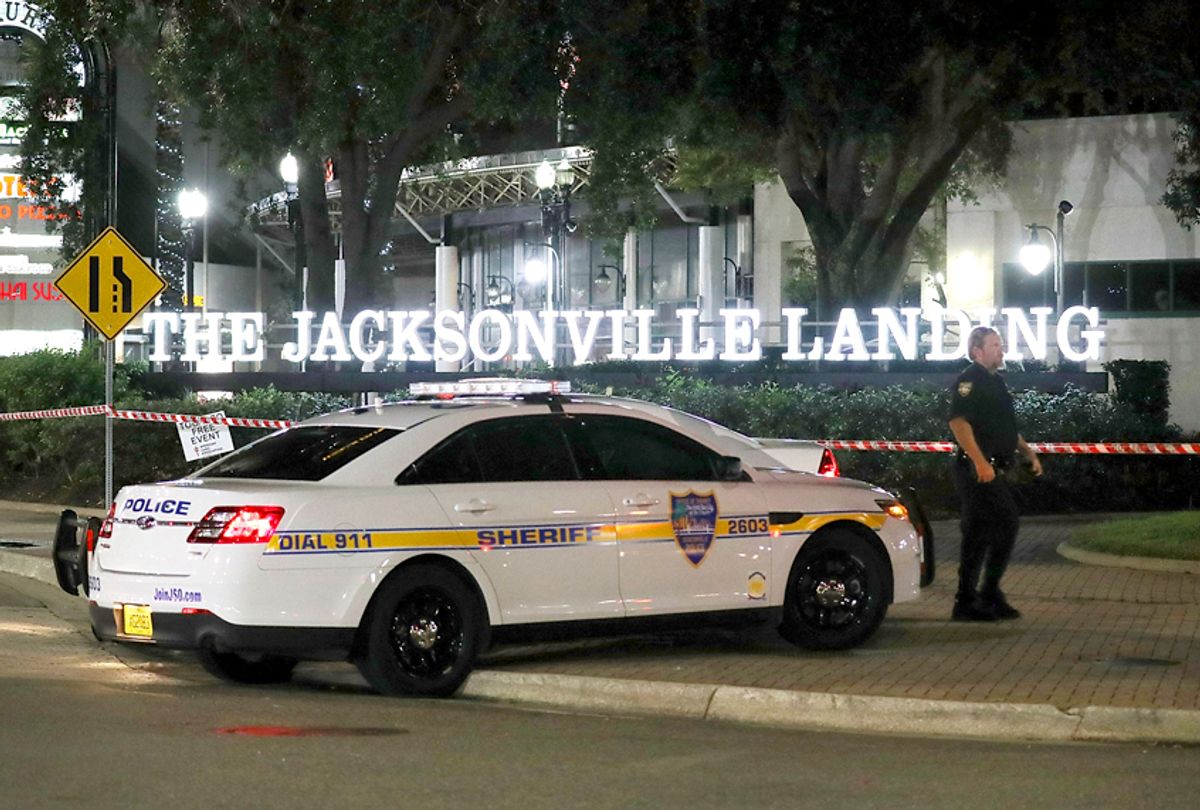 A Jacksonville Sheriff officer helps keep the perimeter secure as law enforcement investigates a shooting at the GLHF Game Bar at the Jacksonville Landing on August 27, 2018 in Jacksonville, Florida. (Getty/Joe Raedle)
--

In the aftermath of a mass shooting at a Jacksonville gaming event which left two people dead and at least 11 injured, gamers are understandably worried that their passion — which has been smeared for decades with the accusation that it leads to violence — is going to be the scapegoat to which non-gamers point when finding blame for Sunday's tragedy.

Sadly, a mass shooting at a video game tournament is all the ammunition the @NRA needs to push their “video games lead to gun violence” bullshit. #Jacksonville#GunControlNOW#NoRA#DrainTheNRA#GOPBloodMoney#VoteThemOut#Resist

The gaming community needs to come togther. In the coming days the media will pull the “ Video games cause violence” clearly a mental health issue. https://t.co/zANRiU5o8U

It isn't simply that there are anti-video game activists out there like Jack Thompson, the disbarred former Florida lawyer who as recently as February could be found crusading against the art form that he claims causes violence. After the Parkland, Florida shooting at Marjory Stoneman Douglas High School, which led to 17 deaths and 17 injuries, another Floridian — this time Rep. Brian Mast, who represents a district just north of where the Parkland shooting occurred and grew up five minutes away from that school — placed the blame on a number of video game franchises.

"The biggest pusher of violence is, hands down, Hollywood movies, hands down, the video game market," Mast told NPR. "When you look at 'Call Of Duty,' when you look at movies like 'John Wick,' the societal impacts of people being desensitized to killing in ways that are different than how somebody that was on the battlefield is desensitized is troubling and very different."

Gov. Matt Bevin of Kentucky, a Republican, also pointed the finger at video games after the Parkland shooting, telling radio host Leland Conway that "you look at the ‘culture of death’ that is being celebrated. There are video games, that yes, are listed for mature audiences, but kids play them and everybody knows it and there’s nothing to prevent the child from playing them, that celebrate the slaughtering of people."

President Donald Trump himself made a similar point in the aftermath of the Parkland shooting.

"I'm hearing more and more people saying the level of violence on video games is really shaping young people's thoughts," Trump said during a White House meeting on school safety, according to CNN. "And then you go the further step, and that's the movies. You see these movies — they're so violent, and yet a kid is able to see the movie if sex isn't involved."

Even Oliver North, the former solider and central figure from the Iran-Contra scandal who actually advised in the creation of a violent video game, hinted at blaming the popular scapegoat after a mass shooting in Santa Fe, Texas back in May. Choosing his words carefully, North blamed "youngsters who are steeped in a culture of violence" for the epidemic of mass shootings, according to The New York Times.

North is the president of the NRA.

But video gamers do not deserve to be scapegoated.

Studies have conclusively failed to find any meaningful link between violent behavior and consumption of violent video games. In a way, the arguments that video games cause violence can best be compared to the ones which deny that man-made global warming is an existential threat to our planet. On both occasions, they require believers to ignore overwhelming scientific evidence in order to buy into a position held by specific interest groups for ideological or financial reasons rather than logical ones.

This isn't meant to be an unequivocal defense of gaming culture; like all sub-cultures identified with the so-called nerd community, it has its ugly side, whether it takes the form of sexist and racist harassment or fans simply acting like boors when content creators qualitatively disappoint them. These behaviors are unacceptable and no excuse can be made for them — and none is being offered here.

That said, no fanbase deserves to be characterized by the horrid behavior of a minority within its community, gamers very much included. Although fiercely competitive, video gamers almost always express that competitive spirit within the framework of close friendship and general cheerfulness. Even though losers are frequently disappointed in defeat (much as the alleged shooter in Jacksonville, Daniel Katz, is reported to have been), they handle their losses with the same maturity that one would expect from anyone over the age of five.

I hope that the gamers fearing an anti-video game backlash are wrong. Unfortunately, though, the same attitude that led to gamers being bullied in the hallways of high school lunchrooms has not entirely left our culture. It is prevalent among adults who, like the conservative politicians in the thrall of the NRA, desperately need to believe that something can be blamed for our epidemic of violence other than the toxic combination of personal evil with weapons that can be used to commit terrible crimes.

If they have their way, we will once again hear about how video games should be blamed for the sins of evil murderers and the people who misread the Constitution in order to avoid regulating firearms.

Sen. Joe Lieberman provides important context for his stance on violent video games from the 1990s.