McGowan also addressed Argento directly: "Be the person you wish Harvey could have been" 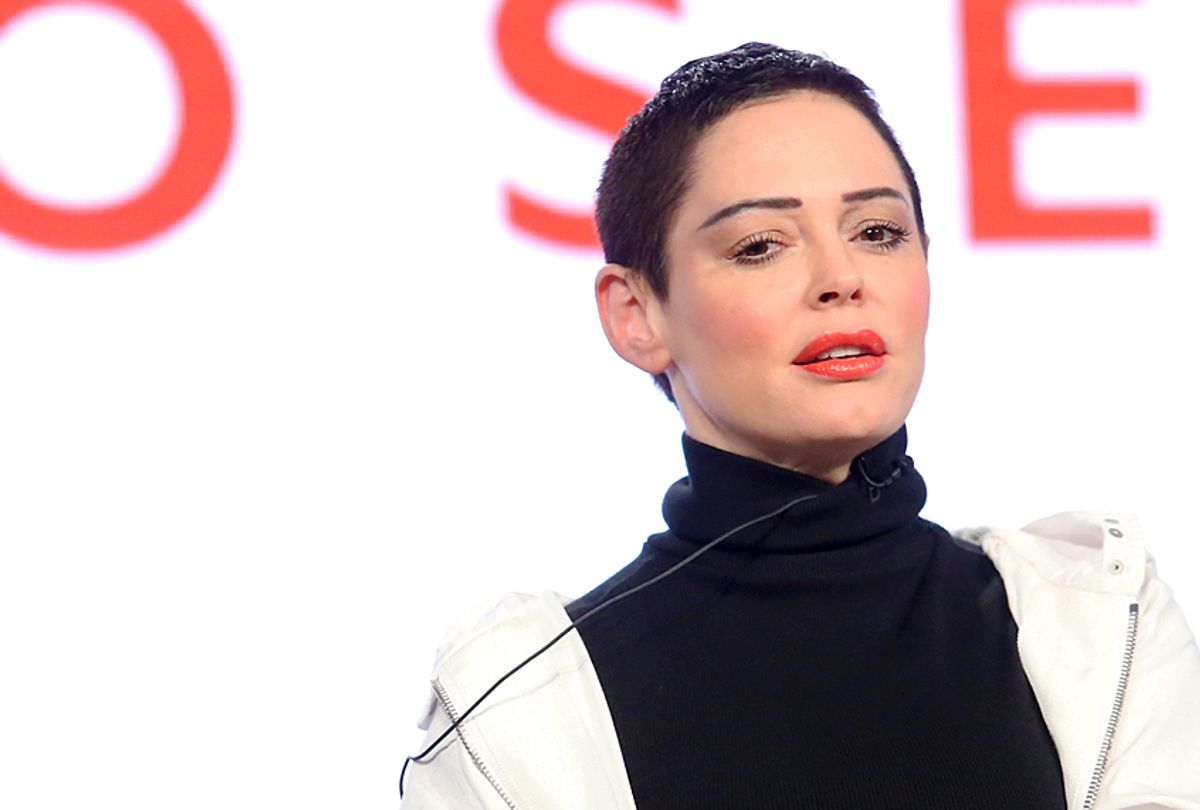 Rose McGowan released a statement about the sexual assault allegations against Asia Argento on Monday night, claiming that Argento had admitted to McGowan's partner, Rain Dove, that she'd had sex with Jimmy Bennett when he was 17. In a public statement of her own, Argento has denied the sexual assault allegation. But last week, TMZ published what it said were text messages written by Argento that appeared to contradict her statement.

"A lot of people have been demanding answers and a response to the recent events surrounding Asia Argento’s sexual assault case," McGowan's statement said. "Many people believe that because we have been close in each other’s lives over the past year that perhaps I am affiliated with this incident or being complicit. I am not."

When the allegations against Argento first became public, McGowan tweeted a brief statement, saying she is heartbroken and will "continue to work on behalf of victims everywhere."

McGowan said in her statement that only in the past year had she and Argento become close due to their shared trauma and experiences relating to Harvey Weinstein — both women have accused the former Hollywood producer of sexual assault — "But then everything changed. In an instant," she wrote. "I received a phone call and series of messages from the being I’ve been dating- Rain Dove. They said that they had been texting with Asia and that Asia had revealed that she had indeed slept with Jimmy Bennet [sic]."

Rain Dove is a well-known gender-nonconforming model who has appeared in both men's and women's clothing campaigns. They are also an LGBT activist and outspoken about gender issues. Recently, Rain Dove posted to Twitter a message that could have been for Argento, saying: "The truth helps me sleep well at night. That’s why it’s coming out no matter what. Friend, family, acquaintance it doesn’t matter when it comes to justice- you do not get special treatment. You get equal treatment. Hope you’re ready. #MeToo."

McGowan continued, "Rain also shared that Asia had stated that she’d been receiving unsolicited nudes of Jimmy since he had been 12. Asia mentioned in these texts that she didn’t take any action on those images. No reporting to authorities, to the parents, or blocking of Jimmy’s social media. Not even a simple message 'Don’t send me these images. They are inappropriate.'"

Rain Dove told McGowan that they were going to turn their text messages with Argento over to the police, McGowan said, and that she offered Rain Dove her full support on the matter. "I responded with 'You have to. You must.' I wasted no time," McGowan's statement read. "It wasn’t hard to say or support. What was hard was the shell shock of the realisation [sic] that everything the MeToo movement stood for was about to be in jeopardy. An hour after our conversation was finished Rain Dove confirmed that they had turned over the texts and were in conversation with officers. Almost 48 hours later the texts were in the press."

McGowan said she had introduced Rain Dove and Argento following the death of Anthony Bourdain, and the three traveled to Berlin together to support Argento in her time of mourning. "While in Berlin Asia had mentioned that she was being extorted for a large sum of money every month by someone who was blackmailing them with a provocative image," McGowan's statement said. "No one in the room knew who the extortionist was. Now we know it to be a reference to this case."

The New York Times first published the allegations against Argento and revealed that the Italian actress had quietly paid Bennett $380,000 as part of a settlement of an intent to sue after the actor accused her of sexual assault when he was a minor in 2013. Bennett did not comment for the story. An unidentified party sent the Times legal documents between lawyers for Argento and Bennett that detailed the payment arrangements and also a selfie from May 2013, the date of the alleged assault, which appears to show the two lying in bed topless.

After the Times story and Argento's denial, Bennett came forward to offer his perspective. "I did not initially speak out about my story because I chose to handle it in private with the person who wronged me," Bennett, now 22, said Wednesday in a statement to The Hollywood Reporter. "My trauma resurfaced as she came out as a victim herself. I have not made a public statement in the past days and hours because I was ashamed and afraid to be part of the public narrative."

McGowan said she wasn't surprised that Argento confided in Rain Dove, as they are "a person to whom many high profile entities consult when they are experiencing social pressures because Rain is good at guiding them through the research confrontation, rehabilitation, and solution process," she said. "While they are a person who is good at keeping a secret for those dedicated to making things right- they are also justice driven. So it was not a surprise to me that I received that call and the messages from them."

McGowan added that she was going to be OK, and although it's sad to lose a friend, "whats even more sad is what happened to Jimmy Bennet [sic]," she said. "Whether or not the extortion case is true- it wasn’t fair and it wasn’t right. It is the type of thing I fight against alongside so many."

The actress added that she hopes the world continues to prioritize justice. "We can not let this moment break the momentum of a movement that has freed so many people. We must use it to allow us to become stronger. More compassionate. More aware. And More organised [sic]," McGowan said, and she finished her statement addressing Argento directly: "Asia you were my friend. I loved you. You’ve spent and risked a lot to stand with the MeToo movement. I really hope you find your way through this process to rehabilitation and betterment. . . Do the right thing. Be honest. Be fair. Let justice stay its course. Be the person you wish Harvey could have been."

What can be done to change the culture of sexual harassment?