After Jacksonville shooting, NRA's panoply of lies gets even weirder 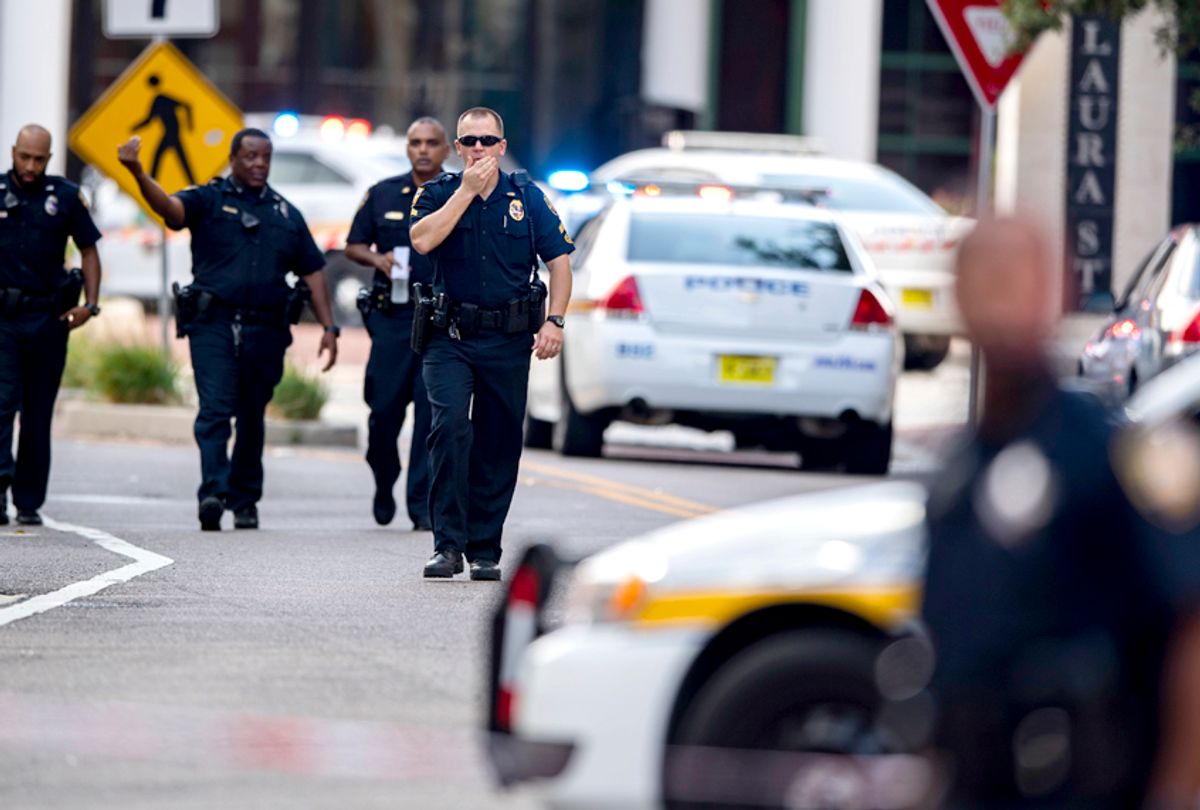 American mass shootings often have death tolls of more than a dozen, so it was mildly surprising that Sunday's shooting in Jacksonville, Florida — when a disgruntled gamer allegedly murdered two other men at a video game tournament before killing himself — captured the nation's attention at all. A Twitch livestream captured the shooting, however, and also captured the last moments of 22-year-old Eli Clayton, who was on camera playing Madden under his gamer tag "TrueBoy" when shots rang out, leaving Twitch viewers with Clayton's controller disconnection message and the sounds of people screaming in panic and pain.

That visceral reminder of the horrors of gun violence managed, for a few days at least, to capture the country's attention, as did subsequent reports that the alleged killer, David Katz, had a history of mental health problems that didn't seem to prevent him from obtaining a gun.

As always happens after a high-profile shooting, spokespeople from the National Rifle Association (NRA) and their friends in right-wing media swung into action, seeking to blame anyone or anything they could -- except, of course, the lax gun laws that allow dangerous people to arm themselves.

The focus, as it so often is, was on judging the victims' behavior. Exhibit No. 1 was Grant Stinchfield, a host on NRATV, who actually blamed the use of headphones at video game tournaments for the tragedy.

“What we typically see after a shooting tragedy in America is that spokespeople for the NRA try to find a way to blame the victims for their own deaths or injuries," Shannon Watts, the founder of Moms Demand Action, told Salon.

Part of what's at work in Stinchfield's play here is simple enough: He's tapping into the get-off-my-lawn mentality of the aging audiences for conservative media, who are eager to blame newfangled technologies rather than accept that guns are the real reason for so much senseless violence. A similar strategy was seen on Fox News, when panelists blamed smartphones and video games for the crime, seemingly indifferent to how cruel this particular tactic is, since the victims in this tragedy were playing a video game in a spirit of friendly competition and hurting no one.

When called out on his victim-blaming, however, Stinchfield doubled down, insisting on Twitter that his "goal is to help people save themselves" by encouraging hyper-vigilance at all times.

When a woman responded by calling his advice "ludicrous" because that means people can "never relax," Stinchfield replied, "Sadly, I don't ever relax. We live in a world that makes it very hard to relax. I am always aware of my surroundings and I am safer for it. You aren't paranoid if the things you fear are a real possibility."

What's exasperating about this attitude, Watts said, is that Stinchfield is deliberately ignoring the role that he and his colleagues at the NRA have played in creating this fear that anyone could be shot at any time. It's a fear that is a direct result of how many guns there are in our country and consequently how many mass shootings occur.

Hyper-vigilance of the sort that Stinchfield recommends is generally understood by mental health experts as a problem and is frequently a symptom of serious mental illness such as PTSD or other anxiety disorders.

Stinchfield's attempt to blame headphones for the tragedy in Jacksonville is particularly strange, since the NRA has been actively lobbying to pass a federal regulation repealing restrictions on silencers, which work by muffling the sound of gunshot in much the same way that wearing headphones might. Many in law enforcement oppose lifting these restrictions, precisely because there's a fear, backed up by history, that silencers make it hard for people -- whether they're being hyper-vigilant or practicing a healthier level of self-awareness -- to know where gunshots are coming from and avoid them.

Stinchfield blew right past this contradiction by claiming that silencers are "anything but quiet" and "are about keeping people safe from hearing loss." But of course they do that by suppressing the sound — significantly, though not completely — which is exactly what a pair of headphones does. In fact, one place where people cover their ears in much the same way that Stinchfield blames the Jacksonville victims for doing is at a gun range, where ear coverings are worn for protection.

Of course, one major difference between headphones and silencers is that the headphone industry doesn't have a well-funded lobby writing legislation for Congress to deregulate a dangerous product. The same cannot be said for silencers. As the Huffington Post reported last year, the gun industry sees silencers as a way to shore up profits in the face of a down-market for gun sales. The American Suppressor Association, a lobby that represents silencer distributors, even had its general counsel help draft the bill to deregulate the devices.

Congressional Republicans have made a pass or two at that bill, but every time they get ready to do it, there's another high-profile shooting, forcing them to shelve the legislation, at least for now.

Ultimately, Stinchfield's contradiction on headphones vs. silencers is important mainly because it demonstrates the tactics that the NRA and the gun industry use to derail any discourse about meaningful regulations to reduce gun violence. It's doubtful that Stinchfield sincerely believes headphones are a major contributor to gun violence. Instead, the strategy is to throw out a bunch of distracting arguments in an effort to get the public talking about anything other than meaningful gun safety regulation.

The same thing was evident in NRA spokesperson Dana Loesch's latest set of talking points. After the Parkland shooting in February, Loesch seemed to indicate support for laws that would prevent mentally ill people from obtaining guns, saying, "None of us support people who are crazy, who are a danger to themselves, who are a danger to others, getting their hands on a firearm."

But on Twitter after the Jacksonville shooting, Loesch was singing a different tune. She tweeted that "the murderer was involuntarily committed" and wondered "how, with [Maryland's] strict gun control, did he obtain a handgun," as well as stating that "MD gave him [a] qualification license, even after he was twice institutionalized for mental illness and on anti-psychotics." The purpose of all that was, it appears, to characterize gun regulations as ineffective and, in effect, to argue they should be abandoned.

At one point, Loesch even took a swipe at Maryland for having "red flag laws," again implying that laws allowing courts to remove guns from dangerous people — which the NRA has of course lobbied against — are a pointless waste of time. What she didn't note is that the Maryland law she claims doesn't work also doesn't take effect until October.

None of this really matters to the NRA, of course. The point is to inject a bunch of distracting noise into the national discourse and arm their followers with talking points that are meant to confuse rather than enlighten. By turning the issue of gun safety into a minefield of lies, nonsensical arguments and bad-faith gambits, the NRA and its allies hope to induce a kind of learned helplessness in the American public. If people believe it's impossible to cut through the discursive clutter, they may also believe it's impossible to do anything to stop gun violence.

Why Congress does nothing about guns

Former Rep. Steve Israel on the political failures that drove him out of politics.