Griffin publicly refuses an offer to join Lahren for a "thoughtful, productive, and amicable dialog" 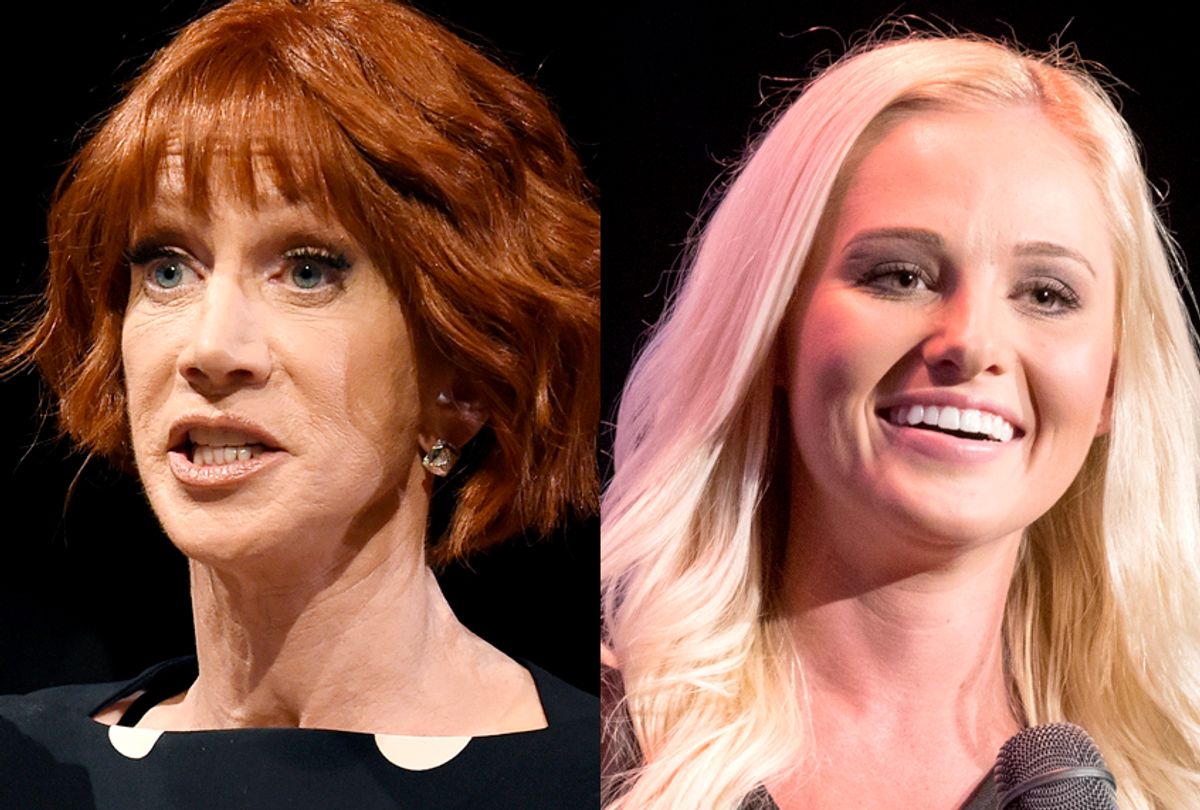 On Monday, Kathy Griffin called out Fox News host Tomi Lahren and the network after they sent her an interview request to appear in a sit-down.

"Dear @TomiLahren, You and your network told me my career was over and that I was irrelevant," Griffin wrote on Twitter. "Now you want to interview me. Not only do I not want to waste my time with you, I’m too busy selling out shows on my US tour."

Griffin signed off her reply: "Go F**k Yourself, Kathy Griffin."

Griffin also posted what appeared to be the interview request letter from Fox News, which sought Griffin to join Lahren for a "thoughtful, productive, and amicable dialog."

"I am writing to inquire if Ms. Kathy Griffin would have any interest in participating in a sit-down interview with Tomi Lahren for Fox’s upcoming subscription-based, digital streaming platform called Fox Nation," the request read. "With the streaming service, we are able to air interviews in their raw and unedited forms," adding that the topics for the conversation "will be on the issues of the day, and we are hoping to have a thoughtful, productive and amicable dialog; all in a relaxed and casual setting."

Griffin's response to the interview request received over 8,000 retweets on social media and over 50,000 likes.

In true Lahren fashion, and never willing to let a social media feud go unchallenged, the Fox News host replied to Griffin's message, saying: "Thought maybe you’d like to defend and discuss your Trump Derangement Syndrome on the most-watched cable news network. Guess not! Have a nice day."

Griffin ended up apologizing for the photo shortly after in a video message, saying she "crossed the line." However, the backlash persisted. Griffin canceled her 50-city U.S. tour, was fired as co-host of CNN's New Year's Eve coverage and other offers for her to speak or appear were rescinded.

The president also tweeted about the photo scandal, saying Griffin should be "ashamed of herself" and that his children "are having a hard time with this."

But in recent months, Griffin has re-emerged with new energy and is apparently done apologizing. The comedian appeared on "The View" in April to discuss her comeback tour and declared, "By the way, I take the apology back."

"Look, I'm not holding back on this family," she continued, to audience applause. "This president is different and I have been through the mill, and so now I'm back on the road. I sold out Carnegie Hall in less than 24 hours."

In May, and on the anniversary of the infamous Trump photoshoot, Griffin explained some missing context to the controversy. She said the photoshoot was meant to put a spotlight on Trump's rampant sexism, which she worried was taking a backseat when it came to criticism of the president revolving around the Russia investigation and election interference.

Griffin added that things got much worse for her once the president commented. She described him as "punching down" and using "his following to go after me. Was that appropriate use of presidential power? I don't think so," she wrote.