Jones was describing his encounter with Latino protestors, whom he said were "dressed like MS-13 — all thugged out" 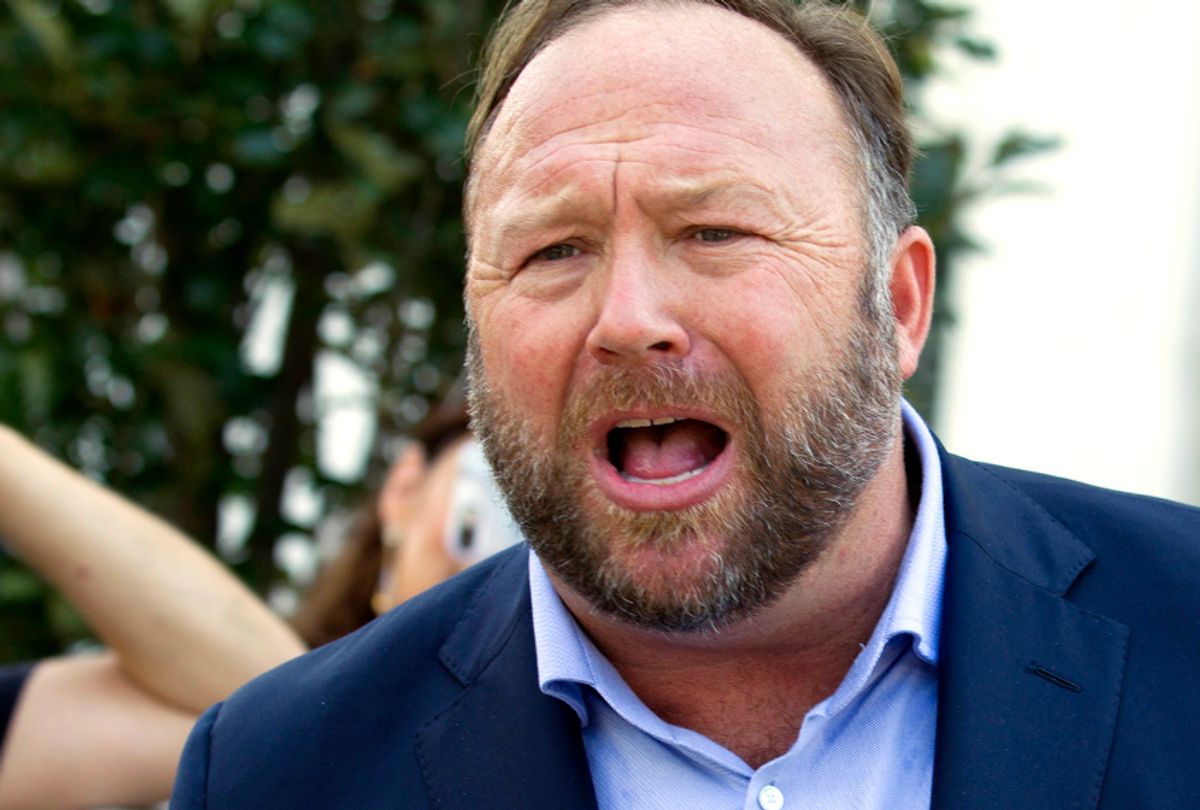 Infowars' Alex Jones claimed that he was the victim of racism this week at the hands of a group whom he labeled the "brown KKK" during Thursday's edition of "The Alex Jones Show."

"I had Hispanic ladies come up to me and white ladies and white dudes and go, ''F' you, Nazi' in [Washington] outside the hearings," Jones said. "It's on vide. We’ve got to find those and play those. Those were epic videos."

At the time, the far-right media personality was in the nation's capital to attend congressional hearings on social media accountability. Jones had a large stake, as social media and streaming platforms have purged much of his content and channels that peddle news and opinions from his conspiracy theory-laden website Infowars.

That list includes Facebook, Apple, YouTube and Spotify. On Thursday, Twitter also announced that the platform had "permanently suspended" Jones and Infowars. "We took this action based on new reports of Tweets and videos posted yesterday that violate our abusive behavior policy, in addition to the accounts’ past violations," Twitter Safety wrote.

But Jones' appearance at the hearings was marred by controversy, as he crashed a press gaggle to confront Sen. Marco Rubio (R-Fla.) and ended up instigating a heated exchange with the former presidential candidate, in which Jones' alleged that he was being denied his First Amendment rights.

And Jones, who has disparaged an innumerable amount of individuals and communities, now claims victimhood. He said that when protestors approached him and insulted him outside of the hearings, he tried to explain to them that "well, actually, I believe in Martin Luther King, and I believe you judge people on what they stand for." But Jones categorized the encounter and the response from protestors as "KKK stuff on steroids."

"And I'm sitting there, and they're just spewing all this racism at me," he continued, "And I didn't dislike them because they were Hispanic, because I have great Hispanic fans come and wonderful people. I was hugging all over them," Jones said, estimating that "like ten groups of Hispanic folks come up and love on me."

"But there were these ladies that were coming dressed like MS-13 — all thugged out — and they were just saying, you know, 'Get out of here, pilgrim. You’re trash. We hate you. You’re subhuman,'" Jones added, "And it’s all the same stuff the New York Times writer was saying. That’s what they’ve done. That’s what the globalists have created. So that’s what this is targeting — to create these people, the brown KKK."

Jones also ripped into Nike and Colin Kaepernick, as well, adding that the company is trying to "push this narrative" by casting him for its campaign and hanging "giant billboards of this guy like an icon, because he says, 'America sucks' and he says, 'There’s all this division,'" he continued. Jones accused Nike, Kaepernick and others of "trying to counteract" the work of President Donald Trump, whom in his view, "is trying to bring the country together."

The alt-right did not rise out of nowhere: Author David Neiwert explains radical right's evolution

Trump has kept the alt-right alive.