Facebook de-platforming Infowars may be too little, too late 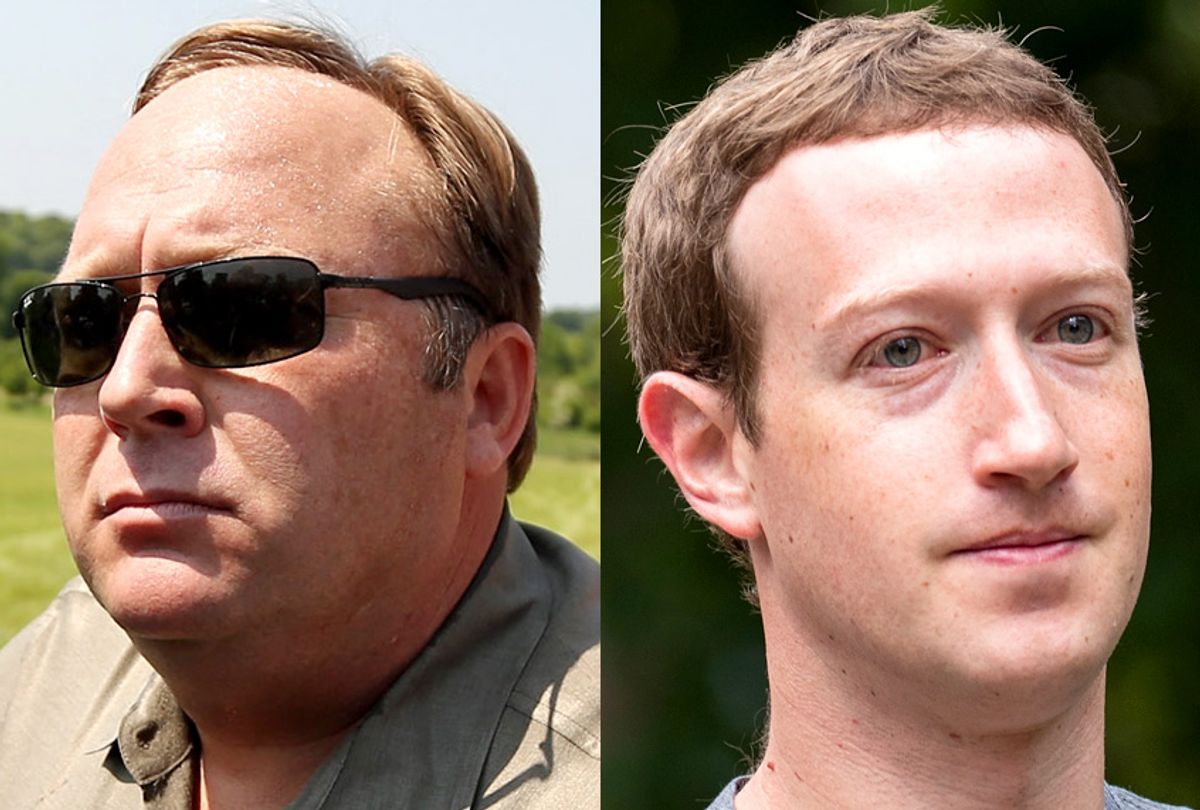 At long last, Facebook finally did what many have criticized them for not doing: ban the conspiracy-mongering "news" site Infowars from its platform. Infowars was one of four pages run by conspiracy-peddler Alex Jones that the social media giant "unpublished," along with the Alex Jones Channel Page, the Alex Jones Page and the Infowars Nightly News Page. One of those pages had nearly 1.7 million followers in July.

The social network announced the news on Monday to its users in an official company blog post, stating that Jones had violated the company’s “community standards.”

“All four Pages have been unpublished for repeated violations of Community Standards and accumulating too many strikes,” the statement explained. “While much of the discussion around Infowars has been related to false news, which is a serious issue that we are working to address by demoting links marked wrong by fact checkers and suggesting additional content, none of the violations that spurred today’s removals were related to this.”

Facebook said in its statement that specific content that glorified violence led to them to take action, as that violent content ”violates our graphic violence policy." The company also explained that some of Jones' pages' posts used "dehumanizing language to describe people who are transgender, Muslims and immigrants, which violates our hate speech policies.”

It is important to note that the pages have not been outright deleted but “unpublished” — which, according to Facebook’s community rules, allow the pages to appeal the case. If they don’t appeal or the appeal fails, the page is removed.

Facebook followed suit after Apple removed five of the six Infowars podcasts from its Podcasts app on Sunday. An Apple spokeswoman said, “Apple does not tolerate hate speech.” It also comes a week after YouTube took down four InfoWars videos from Jones’ channel. YouTube has since terminated his channel that has 2.4 million subscribers. Spotify also removed the entirety of one of his podcasts.

The simultaneous actions by unaffiliated tech giants suggests a shift in the way that Silicon Valley tech companies police profferers of hate speech and intentionally misleading propaganda posts engineered to manipulate. For years, the libertarian ethos intrinsic to many of Silicon Valley's corporate leaders meant that tech companies that provided platforms were loath to moderate them whatsoever. Multiple factors seem to have tilted the tech giants in favor of moderation: namely, the shock of the 2016 election and the spread of fake news vis-a-vis platforms like Facebook; prominent critiques like those penned by Angela Nagle, who has written about how unpoliced online spaces like 4chan will inevitably drift towards the far-right as a result of a selection effect; and an unending stream of misery from historically oppressed groups who experience disproportionate attacks, threats and trolling online, a well-documented phenomenon.

Previously, Facebook has been criticized for not removing Infowars from its platform, while also facing backlash for contemplating to do so. Its moderation policies have led to heated public debates over the difference between free speech and hate speech, and their relationship to a democratic society.

Facebook’s move to de-platform Jones' pages is a shift for the company, which was previously resistant to the idea. “Look, as abhorrent as some of this content can be, I do think that it gets down to this principle of giving people a voice,” Facebook CEO Mark Zuckerberg told Recode’s Kara Swisher when asked if the company would remove Infowars. In other words, Facebook has backpedaled on its original stance.

Beyond Facebook's wobbly position on Infowars, the company had previously faced scrutiny for its role in the 2016 election and its stance on privacy.

Infowars has served as a feeding ground for public harassment, particularly towards parents of the children who were killed in the Sandy Hook massacre, which Jones often characterizes as a false flag attack. Leonard Pozner, whose son, Noah, was the youngest to be killed in the massacre, received death threats after Alex Jones spread conspiracy theories that the shooting never happened and that the parents were merely "crisis actors." Pozner has reportedly had to move multiple times to avoid the wrath of Alex Jones fans harassing and threatening him.

Last week, Pozner wrote an open letter to Zuckerberg in the Guardian, criticizing Facebook for refusing to take “meaningful action.”

“Our son Noah no longer has a voice, nor will he ever get to live out his life. His absence is felt every day,” he wrote. “But we are unable to properly grieve for our baby or move on with our lives because you, arguably the most powerful man on the planet, have deemed that the attacks on us are immaterial, that providing assistance in removing threats is too cumbersome, and that our lives are less important than providing a safe haven for hate.”

Now that Facebook has taken action, it begs the question as to whether these moves will fix Facebook’s public image.

One public relations expert says no.

“Removing Alex Jones’ pages won’t fix Facebook’s reputation as a platform that enables online harassment overnight, but if Zuckerberg’s company is truly committed to turning things around they have the ability to do it,” Erik Bernstein, Vice President of Bernstein Crisis Management, Inc., told Salon via email.

According to Bernstein, from a publicity perspective, all social media platforms “are under a magnifying glass right now.”

“Facebook has taken serious damage by making it all-too easy for people to bully, harass, and intimidate on their platform while giving few tools for victims to protect themselves,” he added. “Removing Alex Jones’ pages could be a small, but significant, step towards repairing that damage.”